I talk to people a lot about 8-tracks these days (I’m not going door to door but may start). The first thing they mention: “I hate how the songs fade out in the middle.” The second is how they built a nice instant collection from the mail-order record clubs: “I got twelve 8-tracks for a penny, then they kept sending tapes and bills to my parents or whatever, I didn’t care.” 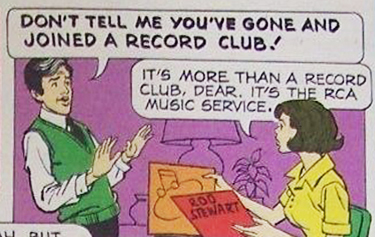 The major-label tape clubs also offered memberships for LP and cassette listeners, but you couldn’t mix formats. Other independent clubs served 8-track listeners only, some with marginal legality. The audience seemed to shift from dads in the early ’70s to kids and then apparently to the moms. Let’s track the marketing — and cool albums — offered by the ’70s tape clubs.

*Note: Click on the images twice to enlarge to easy-readin’ size.* 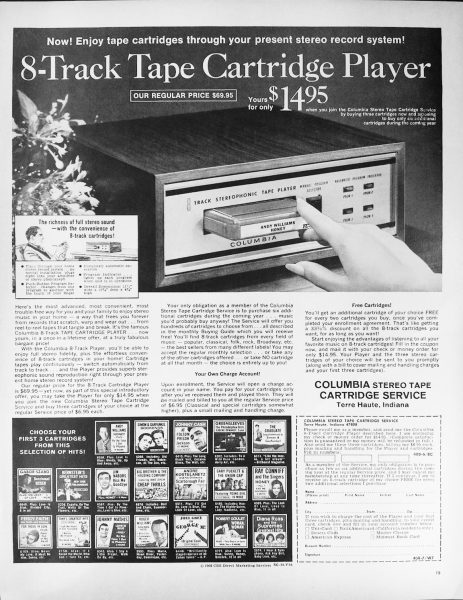 Here’s a stuffy, boring example from 1968 from Columbia Stereo Tape Cartridge Service, a division of Columbia Records. Here the big draw wasn’t the tapes themselves or even mail-order convenience but the very cheap player you could get by subscribing (and paying $15). Check the inset pic of Dad with his pipe enjoying the “richness of full stereo sound.” Tapes offered seem to be entirely Columbia artists (they would later cross-license from other labels) but include Big Brother and the Holding Company’s Cheap Thrills. 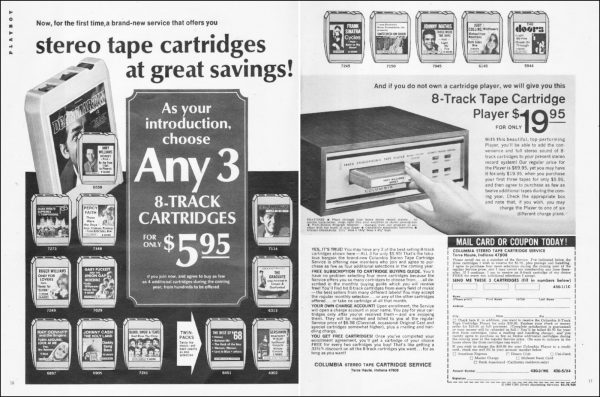 This 1969 Playboy ad (yes, we’re still talking to Dad) adds a new hook: a handful of tapes for pretty cheap! At $2 a pop, not that big a deal (by later 12 for 1¢ standards), and the player has gone up to $20. Note that this is still a component that must be used with an existing stereo system. The shot of a woman’s finger inserting the Andy Williams tape has been recycled from the previous year. Hippest tapes here are the Doors’ debut and Switched-On Bach (which sounds amazing on 8-track, FYI). 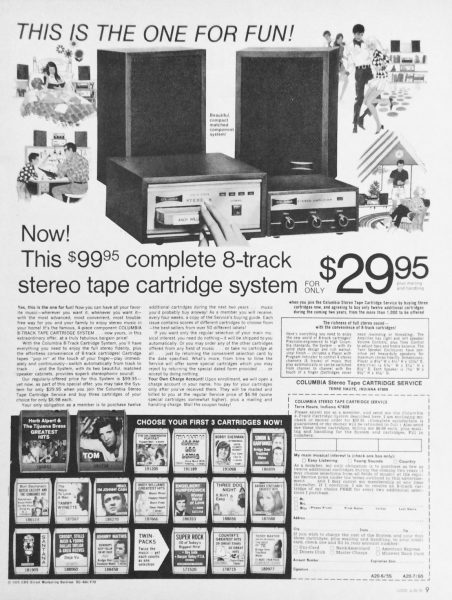 Welcome to the ’70s, finally! Columbia’s still the only player here, but perhaps responding to a market shift, offers a younger appeal (“the one for fun!”) with groovy active-lifestyle illustrations. The complete (if flimsy) stereo system might appeal to older teens or college kids. Price point for the (non-bargain) tapes is $6.98, which would hold pretty stable throughout the decade. The only remotely decent tape here is Santana’s smoldering self-titled debut (which I just bought on eBay recently and enjoyed greatly). 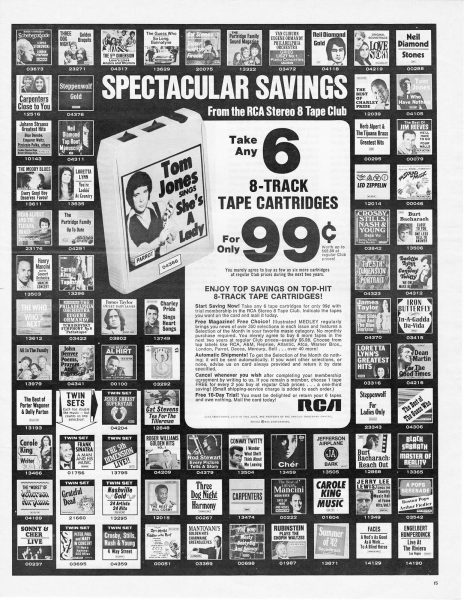 By 1971, RCA Records had entered the marketplace with its own tape club. This offering seems more directed at broke teens (who doesn’t have a buck?) than their dads. (Mail-in card was likely a separate insert in the magazine.) No player offered; tapes could be played in a cheap portable or the family station wagon. Here we see the grid layout familiar from ’60s record-club ads and LP innersleeves. The Tom Jones hero tape is less than promising, but mind-bending offerings include Steppenwolf, Led Zeppelin, Iron Butterfly, Faces, Who, Grateful Dead, Jefferson Airplane, and (incredibly) Black Sabbath’s Master of Reality. Mostly I dig the iconic, simplified album cover designs (be nice if we had those nowadays for phone streaming). 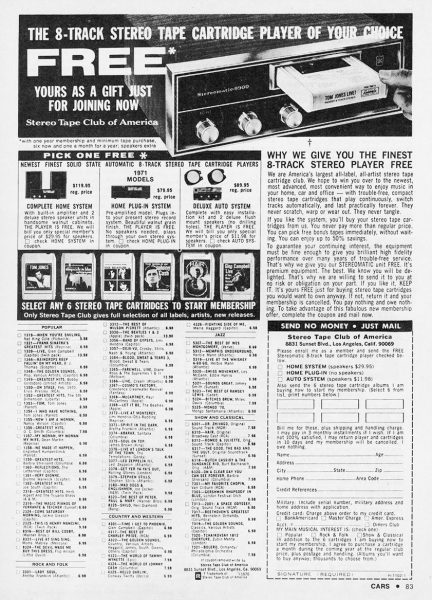 Here’s an independent, the Stereo Tape Club of America, with an intriguing 1971 offer: buy six full-price tapes (but “send no money”) and get the player for free! (They also offered a car-stereo option, which Columbia had not done, though you’d still have to pay to get it installed.) Killer offerings include Beatles, Stones, Zep, Jimi Hendrix + Otis Redding at Monterey Pop, and the Ramsey Lewis cart I reviewed here recently. But coolest of all: Miles Davis’ Bitches Brew. I want that tape, you can keep the player!

Here’s part of a 1972 ad, the only artifact I could find from Capitol’s tape club. Pretty good offer: a $20 stereo and 7 tapes for $2, though the appeal is pretty much dad-focused. Tapes shown aren’t too hip — Who, Grand Funk, Elton John — but maybe better offerings were on the facing page. Mostly I like this for the cool illustrations of Alpert, Englebert, Diamond, Bacharach, and friends. 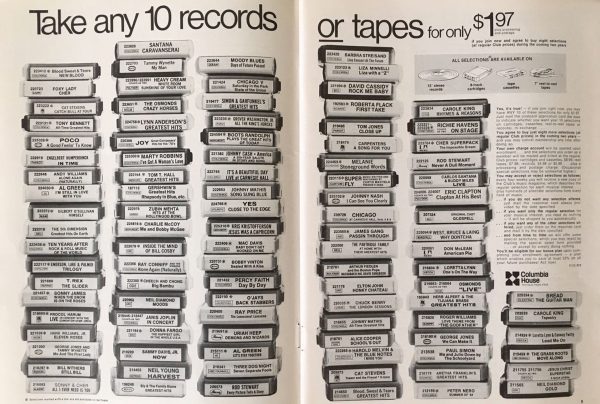 In 1972, Columbia goes for a name change: Columbia House would serve all the LP, cassette, and 8-track subscribers (but one format per subscriber — note the underlined “or” in “records or tapes.”). No stereo offered here, just 10 tapes for $2. And finally, the end-label lineup that seems such an obvious marketing layout in retrospect (it’s ubiquitous in present-day eBay 8-track lots). A staggering amount of titles: standouts include Al Green, T. Rex, Bill Withers, Sly and the Family Stone, Neil Young, Cream, Yes, O’Jays, Uriah Heep, Curtis Mayfield, and Alice Cooper (many of which arrived as “selection of the month” titles to blow the minds of unsuspecting listeners). 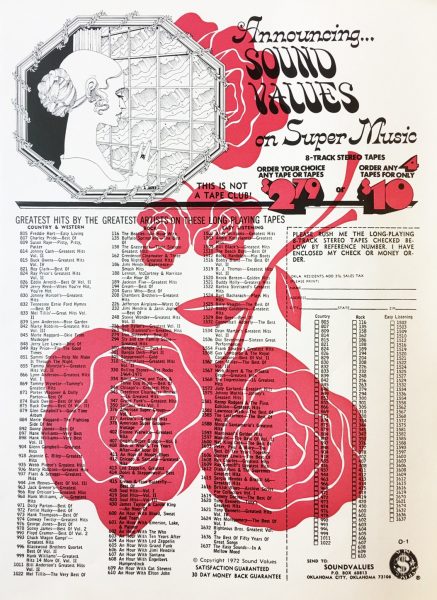 So here’s a thoroughly illegal 1972 offering from Oklahoma City’s brazen tape pirates Sound Values. “Not a tape club,” as the ad promises, just a bunch of homemade comp tapes for ridiculously cheap (4 for $10!), no obligation. Note that few of these offerings are legitimate album titles by the artists; these are largely greatest-hits comps (“An Hour With The Beatles”) assembled by the bootleggers themselves. The artful design was a trademark of the mysterious Sound Values organization. 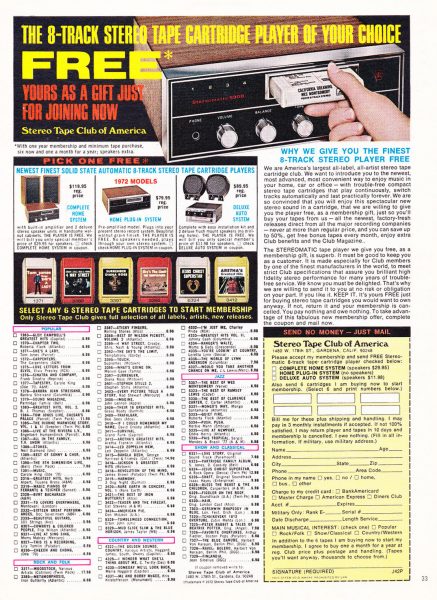 Two years later and Stereo Tape Club of America has nothing new to offer: this 1972 ad is a virtual carbon copy (albeit in color) of their 1970 offer above, with no teen appeal or cool stack of tapes to show. Still, out of this stack I’d grab Marvin Gaye’s What’s Going On, David Crosby’s If I Could Only Remember My Name, and James Brown’s Revolution of the Mind. LOL @ Led Zeppelin New – what, they couldn’t spell Zoso? 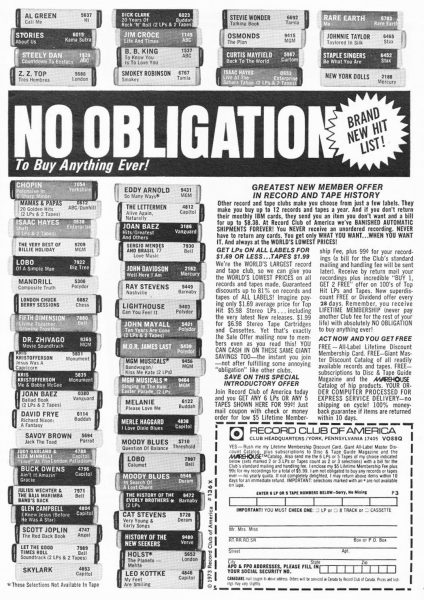 It’s 1973, and here’s another indie with an offer almost too good to be true: mail-order tapes for just $1.99, and five tapes for $1 with your $5 membership fee, no commitment ever! But what’s this about “a bill for the Club’s standard mailing and handling fee… sent later”? The large print giveth and the fine print taketh away. Nice stuff from Z.Z. Top, Mandrill, and Rare Earth. I love that Chopin, Holst, and Scott Joplin are also listed as artists (didn’t they tour that year?). But by far the coolest is the New York Dolls tape (shown just above the “brand new hit list” starburst). Who put that one on the schedule? Is it still available? 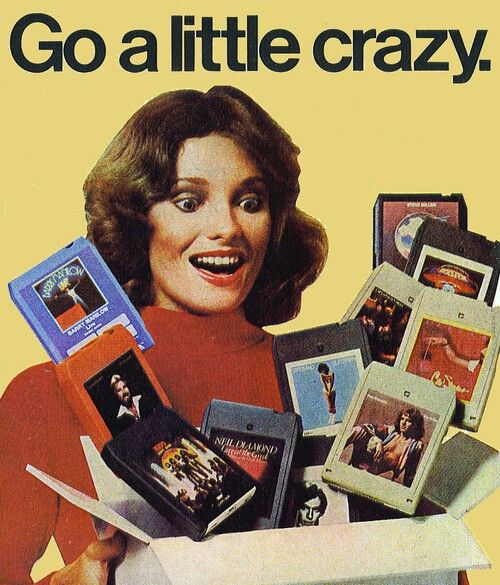 We jump ahead a few years here to 1977. Not sure who issued this amazing image (guessing Columbia House) but I thought it was too good to resist. Here the customer is an adult woman, perhaps a mom, somehow astounded that the tapes she ordered for cheap actually arrived. (Or maybe she’s excited by the Peter Frampton and Cat Stevens tapes on the right because she read my 8-Trackin’ review of them.) 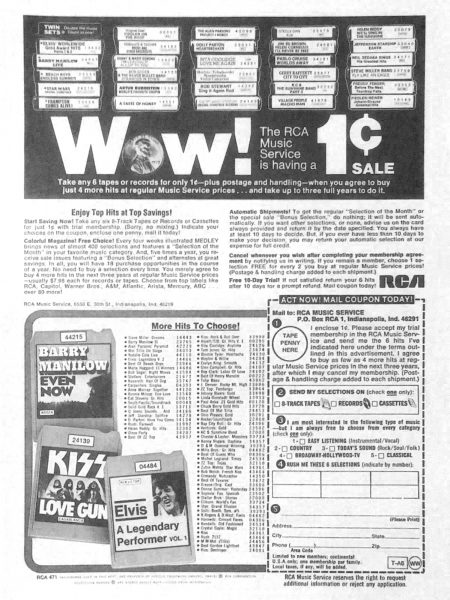 RCA again; this 1977 ad is the first appearance in this post of the “tape penny here” gimmick, though that surely arose much earlier. It’s an odd marketing scheme: did they figure out that “six tapes for a penny” was more credible than “six tapes for free”? Whatever the case, this seems more a juvenile kids’ ploy than a bid for moms (or dads): get your scissors and tape, ask your parents for an envelope! Selections are a little hard to read but include a cool Kiss tape, Ohio Players Gold, and some sci-fi with the Star Wars soundtrack, Rush 2112, and Alan Parsons Project I Robot. 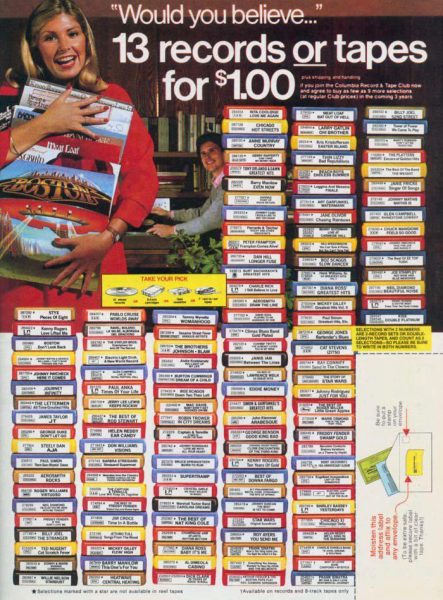 1978, and we’re back to Columbia’s giddy-housewife character, here hugging a stack of LPs because they didn’t have time to do a separate photoshoot with 8-tracks. (Hubby is thrilled with new vinyl provided by his genius wife.) Offerings here are pretty stale, though, with only Thin Lizzy, Ted Nugent, and Aerosmith offering any edge. Interesting to see some kids’ offerings in the mix: The Story of Star Wars and Sesame Street Fever. The latter is the Muppets’ disco tribute and features one of my favorite songs, “Trash,” sung by Robin Gibb —as good a theme as any for the 8-track collector. (Article continues after song…) 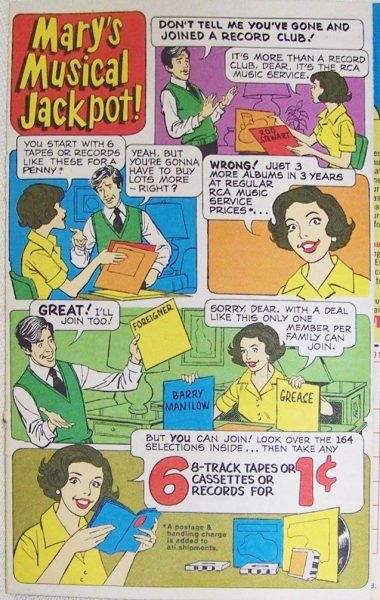 We’ll close out the decade with this 1979 RCA leaflet, likely tucked inside record sleeves or the Sunday paper. This perky comic-book story brings back the clever housewife, here getting hubby stoked on the big cash savings (with an asterisk, that pesky postage and handling charge). I guess the clubs realized they were getting ripped off by families opening multiple accounts to get free albums, hence the “one member per family” caveat (Dad’s going to have to settle for his one Foreigner album). 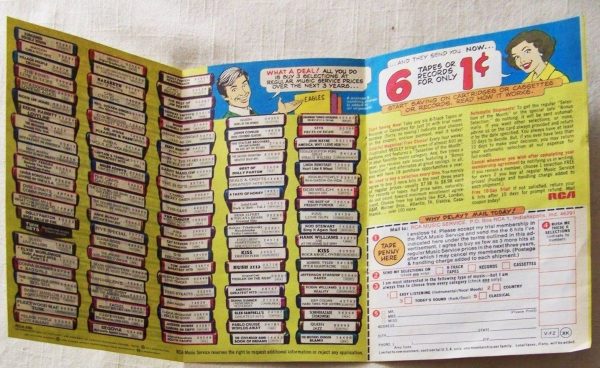 The RCA comic leaflet offers an appealing display of pretty fine titles and artists, including Rickie Lee Jones, Dire Straits, Queen, Southside Johnny, The Police, The B-52’s, The Cars, Abba, Chic, and Sniff ‘n’ the Tears (“Driver’s Seat”). I’d be hard-pressed to pick just six! Here at decade’s end, prices for all formats had gone up slightly, to $6.98 – $7.98. Hope the couple remembers to return their reply card each month and decline the automatic selection, or they’ll be paying $120 a year for Eddie Rabbitt and Steve Martin tapes they don’t want…

Footnote: Columbia and RCA’s tape clubs survived well into the ’80s and kept putting out 8-tracks long after record labels stopped making them. These unique “club tapes” issued between 1982 and 1987, featuring artists such as Prince, Madonna, and U2, are highly collectible and fetch hundreds of dollars — when you can find them. The tape clubs may have seemed cheesy in the ’70s, but their ’80s releases are serious business nowadays.