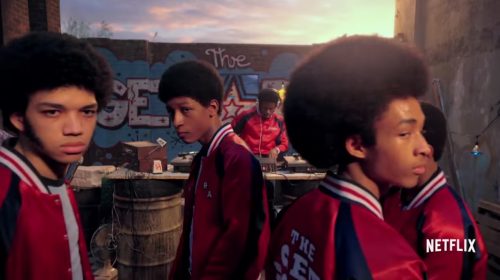 Editor’s Note: Mr. Groove is here with a look at season one of Netflix’s Seventies-based series, The Get Down. Below you’ll find Part Two of the review focused on the show’s music. Part One, focused on characters and backdrop, can be found at The Reading Date.

The Get Down: Disco boogies on as hip-hop finds its voice
In director Baz Luhrmann’s lavish series set in the crumbling South Bronx of 1977, a young guy and gal pursue musical stardom in the rising fields of hip hop and disco.

Considering how visually stylish disco and hip-hop can be, and considering they’re the basis of today’s rap and EDM-flavored pop hits, it’s surprising they haven’t been portrayed on film more often. There have been many disco movies, but nearly all of them show the scene from a dancer’s point of view (e.g., Saturday Night Fever) rather than a musician’s. As for hip-hop, there have been a few good films (Wild Style) and a whole lot of bad ones (Rappin’), but none have attempted to portray the scene’s early, formative years in the 1970s. So that’s why I’m so thrilled with The Get Down’s fascinating insights on how these remarkable sounds were created and sold.

Disco had been slowly growing in New York and other urban clubs for a few years, finally going mainstream in 1976. By summer 1977, the setting of The Get Down, the beat-heavy genre was at its peak. The series brings together a money-hungry label boss, a coke-sniffing genius record producer, and a talented young star. But when singer Mylene rejects producer Jackie’s ridiculous dance novelty, “Boogie Woogie Disco Biscuit,” the dancefloor drama takes an interesting turn. Jackie writes an inspiring new hit, “Set Me Free,” that perfectly summarizes Mylene’s yearning for liberation, and records it in a masterful one-take live session.

But the hard work is still ahead: making the record a hit! To get it played in clubs, they’ll need to sell it to one person: Leslie, the owner of a record pool that picks the hits and sends them to the city’s deejays. As Jackie’s ex-employee and one-time lover, Leslie’s not interested in doing him any favors. When a friend of Mylene’s boyfriend Zeke takes the record to a gay club, the song takes that dance circuit by storm and goes mainstream anyway. 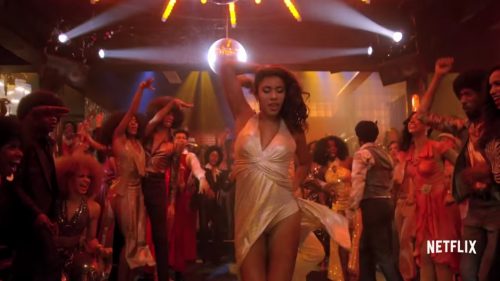 The hip-hop story is even more exciting. Note that at the time of The Get Down’s setting, hip-hop (or rap, as it was known then) was something you could only hear live; the first hip-hop record, Sugarhill Gang’s “Rapper’s Delight,” was still two years in the future. So the discovery (and invention) of hip-hop by Zeke and his crew Fantastic Four Plus One is thrilling to observe, learning what they can on the fly and making up the rest.

Real-life deejays Grandmaster Flash, Kool Herc, and Afrika Bambaata all exist within the show’s fictional world. Flash (played by an actor, but also serving as technical consultant) appears as a sort of mystical guru to the gang, especially to aspiring deejay Shao. They’re eager to learn his trick of repeating a record’s funkiest section (the “get down”) seamlessly for minutes on end. All Flash will say is that it involves a purple crayon, and it’s fun to watch the posse sort out the mystery of Flash’s “quick mix” technique.

Zeke’s wordsmithing also deserves a mention. In wraparound performance clips, an adult Zeke is rapped by real-life hip-hop legend Nas. Back in 1977, it seems as if Zeke’s rhyme sheets are following Nas’ “conscious,” soul-searching and socially relevant style, which hadn’t yet emerged. Thankfully, when he and his gang (now renamed the Get Down Brothers) finally perform their team number in the show’s closer, it’s a silly posse rap full of boasts, put-downs, and bad jokes, just like Sugarhill Gang and everyone else.

The show’s officially released soundtrack is a mix of originals and classic hits, but you’ll hear many more vintage greats playing in the background of The Get Down. Each Saturday in September I’ll be reviewing some of these dancefloor gems in the Disco Lab (the first writeup was yesterday). Meantime, enjoy The Get Down — it’s a perfect binge watch for the rest of your Labor Day weekend!

For more details on The Get Down’s characters and historical backdrop, see Part One of this review on The Reading Date.