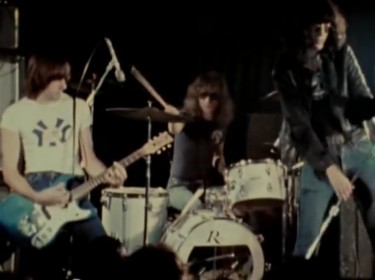 The Ramones recorded their earth-shattering, eponymous debut L.P. in New York City in February of 1976 – 40 years ago this month.

The Guardian reports: Forty years of the Ramones: ‘They were the smartest dumb band you ever heard.’

“The fights, the drugs, the sound, the look: 40 years after the Ramones recorded their debut album, bands from the Sex Pistols to Blondie to Talking Heads recall the Bowery punks’ explosive impact.

Danny Fields, manager:
We’d never seen so many people as at those July 1976 shows. They were all there: the Sex Pistols, the Damned, Chrissie Hynde, Vic Goddard, Adam Ant, the Buzzcocks, the Stranglers – but we didn’t know who any of them were! They’d come over and say: ‘Hello, we’re in a band called the Clash!’

People had had enough of Deep Purple and Emerson, Lake and Palmer, all that 1970s pretentiousness. They wanted to know the secret of the Ramones’ fame. We told them: it wasn’t about virtuosity, it was about ‘just do it’. The band kickstarted the whole DIY, you-don’t-have-to-play-well ethos.”