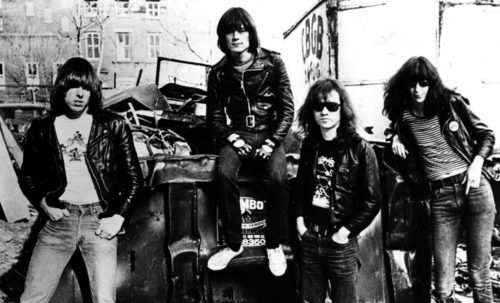 Ramones in alley behind CBGB, 1977. Image by Danny Fields.

Hey! Ho! Let’s Go: Ramones and the Birth of Punk is now on display at the Queens Museum, New York until July 31st. If you’re in the area, you’ll want to stop by for a bit of rock ‘and roll history.

The Guardian reports: ‘They wanted to be as big as the Beatles’: revisiting the Ramones’ legacy

Quote:
“The New York borough of Queens is reclaiming the legacy of four native sons of Forest Hills – Joey, Johnny, Dee Dee and Tommy – with a Ramones exhibition that comes after the 40th anniversary of the band’s self-titled first album. It was a key document in the development of punk as well as an album that neatly bookends the two decades of rock’n’roll that began with Elvis in 1956.“