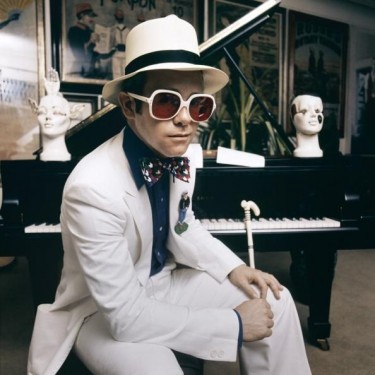 The Telegraph reports: “After half a century of hits and high living, Elton John has settled down. But he’s nowhere close to giving up.”

“‘That’s exactly what I wanted,’ says Elton, laughing, ‘the LA Seventies rock star look.’ The man himself has got this look down to a tee: he greets me like a cuddly, gap-toothed Elvis in stripy Adidas tracksuit, rimless purple sunglasses and that oddly dyed mop of transplanted hair. ‘With all our houses, we choose the art first,’ he says, leading me into a circular alcove where his housekeeper serves us coffee in cups so elaborately designed it’s not clear how to pick them up.“