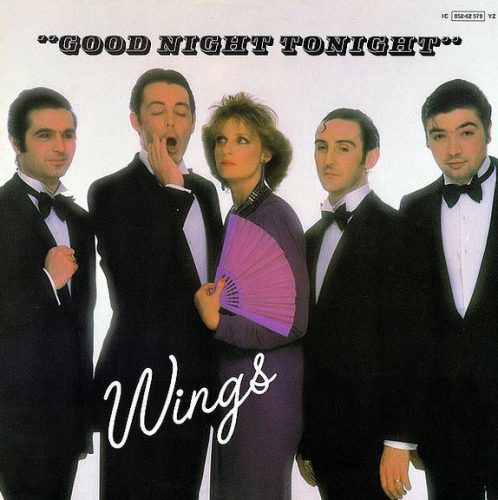 Disco Lab #20: Wings – ‘Goodnight Tonight’ (1979)
In 1957, author Theodor Geisel set out to write a children’s primer using only 236 different words. You know the writer as Dr. Seuss; the book was The Cat in the Hat. 22 years later, Paul McCartney’s band Wings released a hit record whose lyrics used only 27 different words; this was the worldwide smash rock-disco number “Goodnight Tonight.”

Ah, but words aren’t really the point here, are they? It’s all about the smorgasbord of sound. This 1979 disco single was among the last recordings Paul would make with Wings, who broke up two years later. With Wings Paul had been fiddling with the noises a rock band could make; by 1979 he was moving past that into a glorious realm of pure sound, melody, rhythm, and imagination, resulting in his experimental pop masterpiece McCartney II. (In recent years Paul has tapped this same oddball-pop vein working as The Fireman.) (Article continues after song…)

With “Goodnight Tonight,” a fast, Latin-flavored dance tune with a soft, lounge-jazz sound, Paul infused the disco-break approach with Wings’ own amazing solos. The lovely melody and simplistic lyric are underpinned by frequent dub-like breakdowns in both bass and percussion. Then, with verse and chorus out of the way, the fun really begins. First, dueling lead guitars echoing each other’s lines, then there’s a brief flamenco-styled solo, then distorted Vocorder vocals and bouncing kettledrum hits make things even weirder. Yet, for such a sonically daring record, it’s always easy on the ear.

“Goodnight Tonight” was recorded during sessions for Wings’ final album Back to the Egg. Though released as a single just before that album, it wasn’t included on the record, much to the label’s annoyance (the album singles didn’t do nearly as well). To me this track is sheer joy, both in the performance and the listening. McCartney’s lyrics beg the listener not to fall asleep. Not to worry, Paul; not gonna happen. Not for the next 7:25 anyway.