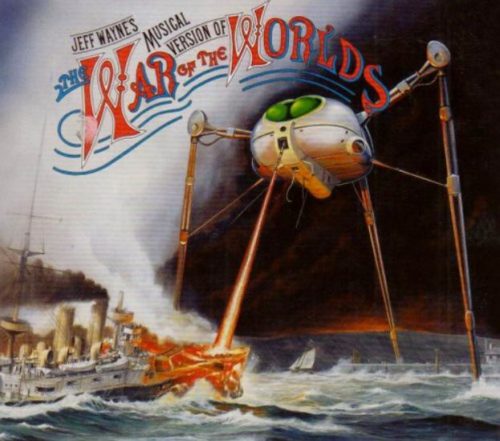 The musician behind this ambitious 1978 prog-rock epic is the otherwise unknown Jeff Wayne, an American composer of jingles and theme music working mostly in England. Wayne dreamed up a sort of opera-slash-radio-adaptation of the Wells work and invited as guest singers Phil Lynott (Thin Lizzy) and David Essex (whose single “Rock On” Wayne had produced), and many others. He even signed on Richard Burton as The Journalist to narrate the piece.

Somehow this grandiose, pompous project found an audience and became a classic of British rock: it’s the 40th best-selling album in the UK, where it’s sold 2.5 million copies. As for Wayne, this is his only major work; a musical version of Spartacus was less well received. A few years ago Wayne recorded and toured with an updated version of the album. It’s survived a lot better than the short-lived Martians it portrays.

This remix is actually shorter than its nine-minute album version, which is unusual. On the album’s opening track, the Journalist (Burton) describes via narration the Astronomer’s assurances that Mars has no inhabitants, though the Journalist can see ships leaving the planet. In a brief lyric, Moody Blues vocalist Justin Hayward vocalizes the Journalist’s disbelief.

This disco 12” more or less resembles the album version, albeit with Burton’s narrations completely removed. Most notable addition is the pulsing synth sequencer heard throughout, sounding like Giorgio Moroder’s production of Donna Summer’s “I Feel Love”. Percussion overdubs tighten up the sound to make it more dance-floor friendly. Cinematic and unique, this oddball sci-fi record must have really baffled clubgoers back in the day: “what the hell am I dancing to?” But still they come…