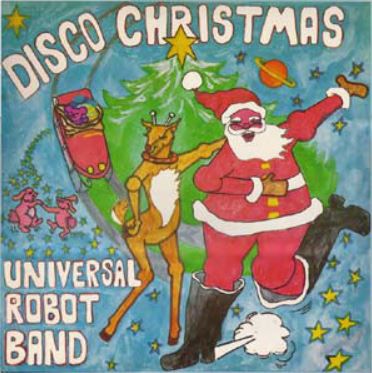 Disco Lab #40: Universal Robot Band, ‘Disco Christmas’ (1977)
Disco meets comedy! Or rather, they meet again. The great part about disco was that you could overlay those long sections of dance beats with just about anything: sound effects (Meco’s “Star Wars Theme/Cantina Band“), lusty monologues (every Barry White record), or even humorous schtick. A year before “Disco Christmas,” Rick Dees pioneered the disco comedy record with “Disco Duck,” which featured an amorous canard squawking over some really tasty drum breakdowns.

In 1977, the Universal Robot Band added Christmas to the mix and came up with a genuinely funny holiday dance number. Like most disco records it features a bright, cheerful chorus section, here introducing the shiny, new concept of a mirror-ball holiday: “this year we’ll do it up right.”

But the real draw is the witty spoken dialogue between Santa and Rudolph, his right-hand reindeer, as they attempt to “add a little soul to this white Christmas.” No longer a Rankin-Bass puppet, the red-nosed deer enthuses, “I can dig it, boss!” Like most Americans, neither Nick nor Rudy are too clear on the exact dance moves required in disco-dancing, but Santa wants to “try and work it out in these new platform boots.” The comedy gets a little broad—“Rudolph, you alright… slap me five. Not in my eye, fool!” — but it’s still a funnier record than “Disco Duck.” (Or am I damning it with faint praise?)

This disco remix adds length through an instrumental and chorus section tacked on at the end. After Santa and Rudolph check out, an abrupt edit at 4:04 takes us into a nicely minimal breakdown with just drum, bass, and female chorus. (Article continues after song…)

As for the very human-sounding band, they’re not really robots at all. This New York combo actually went by four different names. They started their career as a backing group called The Jam Band before becoming R&B combo Kleeer (with three E’s), then briefly tried success as a hard-rock ensemble called Pipeline. Still looking for a hit, they joined with a couple underground disco producers to become the Universal Robot Band, managing a modest hit with “Dance and Shake Your Tambourine” in 1976. Soon after their holiday outing, they reunited as Kleeer and had a series of minor R&B hits through the 80s. In the midst of all this, they reformed as the Universal Robot Band in 1982 for the influential hit “Barely Breaking Even.”

I’m pretty sure, though, that “Disco Christmas” is the only record by any of the four groups in which we hear Rudolph ask his boss, “Santa, how about a raise?” That year they did it up right.