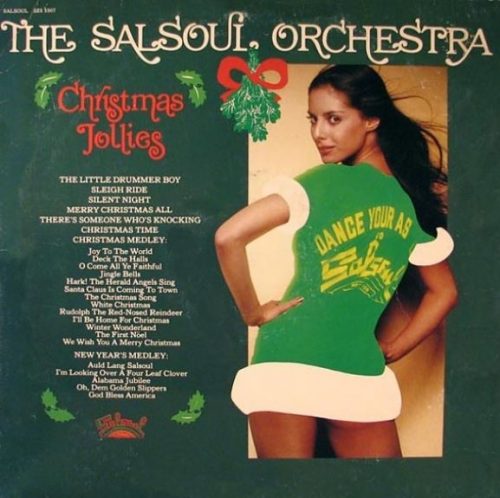 Disco Lab #43: The Salsoul Orchestra, ‘New Year’s Medley’ (1976)
As George Harrison memorably sang, “Ring out the old, ring in the new.” So let’s ring out the end of ten months of obsessive dance record reviews from the still-sparkling Disco Lab, which will close its doors for the time being at the end of 2016. No worries (and I know you were concerned); Mr. Groove will be back in 2017 to distract you from real life with another overly analytical series on trivial matters, right here on Cherry Stereo.

As crowds gather in Times Square, let’s look at a really oddball New Year’s Eve track from Salsoul, the folks who brought us Charo’s crazy number last week. Salsoul put out a pair of decent holiday disco albums called Christmas Jollies, the first in 1976 and the followup five years later. Both albums featured medleys of Christmas tunes; the 1976 album followed up its holiday assemblage with this curious “New Year’s Medley” of uplifting, celebratory songs. (Article continues after song…)

These days, artists wishing to record a Christmas song have a vast array of songs to choose, with hundreds of familiar tunes ranging from ancient carols to 20th-century pop standards to recent rock and R&B hits. For New Year’s Eve, however, it’s pretty much just the one song: “Auld Lang Syne“.* This storied folk tune’s lyrical origins date much earlier than the credited author, Scottish poet Robert Burns. But it’s still kind of a dirge; rather than looking towards the future (a la Slade’s hit “Merry Xmas Everybody“), the lyrics suggest that we embrace the past; “auld lang syne” translating as “old long since.” So much for ringing out the old.

Happily Vincent Montana Jr. and his Salsoul crew chose not to wallop us with six minutes of “old long since.” Instead they turned to a distinctly American New Year’s Day tradition, the annual Mummers Parade in Philadelphia. A sort of East Coast version of Mardi Gras, this parade draws on both European and African traditions and is considered America’s oldest folk festival. Strummed banjos, a fixture of the Mummers string bands, are prominent in this otherwise standard disco arrangement.

The four numbers that join “Auld Lang Syne” in the Salsoul medley date from 1879 to 1927, and, unlike Syne, all four are cheerful, optimistic tunes perfect for ringing in the new. Though it’s hard for me to picture myself in a disco, champagne in hand, doused in confetti, and dancing to “God Bless America,” I guess there are worse ways to start a year. Better a Mummer than a bummer.

* A swell alternative to the dreary Burns anthem is Frank Loesser’s sly, romantic “What Are You Doing New Year’s Eve“: “here comes the jackpot question in advance.” It’s been recorded many times, but to my mind, still not enough. Track down the recent version by Zooey Deschanel and Joseph Gordon-Levitt for a fine end (or start) to your year.