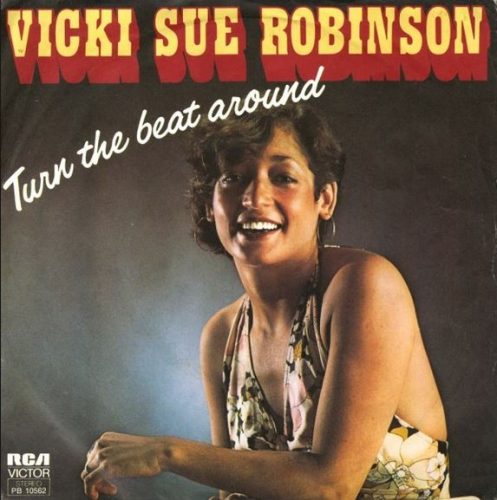 Editor’s Note: This is our second Disco Lab entry spinning the Seventies tunes found in the Netflix series The Get Down. You can play the previous entry right here.

Disco Lab #27 (‘The Get Down’ Edition): Vicki Sue Robinson – ‘Turn The Beat Around’ (1976)
I’ve always enjoyed self-referential songs, including “Turn The Beat Around,” a disco record about the making of a disco record. (I also love James Brown’s ’70s funk classics, with lyrics seemingly crafted to coax the band into ever more soulful jams—“make it funky!”). I always thought it was clever that “Turn The Beat Around” didn’t turn its beat around but its melody: the descending tune and chords of “turn the beat around” are reversed for the ascending “love to feel percussion.”

Like so many great records, this one came about purely by coincidence. After a chance hearing, musician Peter Jackson’s girlfriend Vicki Sue Robinson flipped out over the tune, but was told it had been promised to Peter’s band Touch of Class. Incredibly TOC’s label passed on the tune, claiming “You have that jungle beat in there. It’s not what’s happening.” (That’s like Decca telling the Beatles “guitar groups are on their way out.”) Then Vicki Sue cut her own smoldering version, singing both lead and backing vocals. Even then her own producer was repulsed by it and sat on it for five months. A disco expert told him to release the damn thing, and the rest is history.

In the Netflix series The Get Down, the song is used in its original version quite charmingly. Singer Mylene’s mentor Francisco Cruz convinces record producer Jackie Moreno to hear the girl sing in church. But what should she sing for her audition? Mylene thinks she’ll perform a traditional Latino spiritual—but is that too boring? Suddenly the radio blasts the Vicki Sue Robinson record, which has exactly the spirit Mylene needs. “It’s like a sign!,” says a girlfriend. As they dance, Mylene’s pals use the lyrics to convince their friend to cut loose and boogie, leading to her very expressive showpiece (coming up on next week’s Disco Lab!).

In the song’s lyrics, Vicki Sue coaxes inspiration from the standard disco instruments: strings, horns, flute, guitar, drums, with each one’s contributions heard briefly. After the song proper, this fairly compact 12” remix includes a few short instrumental breaks broken up by vocal reprises of the chorus. Most unexpected is the sizzling fuzz guitar solo that erupts at about 3:23 and continues under the final fadeout. (Article continues after song…)

In 1974, three years earlier and light years away, producer and prog-synth artist Brian Eno collaborated on a deck of cards called “Oblique Strategies” meant to provide inspiration to creatively blocked musicians (including himself). These included such odd commands as “Disconnect from desire,” “Fill every beat with something,” and “Abandon normal instruments.” “Turn the beat around” was not included… yet “Turn it upside down” was. Coincidence? I think not!