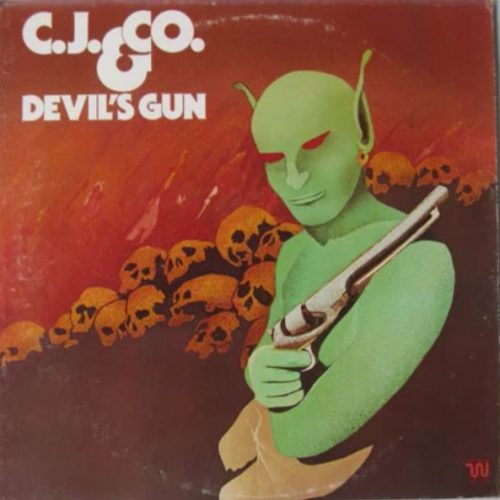 Disco Lab #26 (‘The Get Down’ Edition): C.J. & Co – ‘Devil’s Gun’ (1977)
As I was enjoying my newly snagged thrift-store copy of the fine K-Tel compilation Disco Fever, my dancefloor daydreams were shattered by this strange, sinister record: “Fee fi fo fum / I’m looking down the barrel of the devil’s gun.” And even worse, “He’s watching us burn / One day we’ll learn.” What the hell…

Set in 1977, the new Netflix series The Get Down features many classic and obscure disco songs, and I’ll be reviewing one each week of September here in the Disco Lab. (I’ll also review the show itself tomorrow on Cherry Stereo.) “Devil’s Gun” is featured prominently on The Get Down’s first episode.

On the show, our hero Zeke has gone to great effort to secure a rare 12” single and have it played at a disco, hoping to win the heart of his crush Mylene. But we barely hear the song before handsome criminal stud Cadillac struts into the club and requests his own song—you guessed it, “Devil’s Gun.” (Appropriately, the club is called Les Inferno.) Mylene dances with Cadillac (too closely for Zeke’s liking) as the ominous song plays. But the situation turns deadly as a shooting breaks out elsewhere, then makes its way into the nightclub—and we’re looking down some guns that are all too real.

Not all songs on The Get Down are precisely contemporaneous, but this one is—it was a disco-chart topper in early summer 1977, exactly the setting of the episode. It was the very first record played at the opening of the famed New York disco Studio 54 a couple months earlier.

As you can see in the video clip, this was “A Tom Moulton Mix,” and Tom really knew how to extend a mix to keep it constantly interesting—and nonstop funky. This remix’s killer appeal is pretty simple: it’s the bass-and-drums breaks that open the record and expand the middle (at about 4:20). These breaks already seem like soundtrack music, especially as they build with fuzztone guitar and strings, so the song’s a great choice for the tense, bloody sequence.

Previously on Disco Lab: Shalamar – ‘The Second Time Around’ (1979)