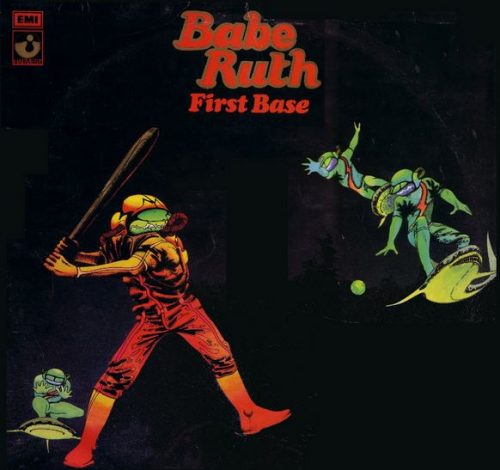 Editor’s Note: This is our fourth, and final, Disco Lab entry spinning the Seventies tunes found in the Netflix series The Get Down. You can play the previous entry right here.

Disco Lab #29 (‘The Get Down’ Edition): Babe Ruth – ‘The Mexican’ (1972)
Today’s lesson: how a 1972 hard-rock song about the Alamo became a pivotal disco and hip hop tune, still referenced and sampled four decades later. (No, I’m not sure I understand it either, but here we go.)

Babe Ruth was a heavy-rock group from England, with the progressive-rock leanings you’d expect from the era. Roger Dean, famous for his Yes album sleeves, painted the cover for their first L.P., First Base, showing an outer-space baseball game. The record included a fascinating cover of the Zappa/Mothers tune “King Kong,” but the original compositions, including the band’s first single “Wells Fargo,” showed a fascination with the American Wild West and border skirmishes with Mexico. This was most evident on the track “The Mexican,” a dramatization of the 1836 Alamo conflict that saw Mexican troops successfully reclaiming a mission from American settlers (Texas was not yet a US state).

In Jenny Haan’s urgent, angry vocal, the lyrics sympathize with the Mexican soldiers, and the music is very Spanish-influenced as well: keyboard and guitar lock step to perform the song’s signature flamenco riff. Underpinning all this is a Latin-flavored rhythm track with some of the funkiest bass and drums ever heard outside of R&B. And just when you think the record can’t get any better (at about 3:33), the band switches melodies and performs a riff by famed score composer Ennio Morricone, the theme to “For A Few Dollars More,” adding to the Western epic feel. (Article continues after song…)

Babe Ruth ran out of steam a few years later (though they’ve recently reformed), but “The Mexican” had only just started its long battle to immortality. In 1978 the song saw a proper disco cover (justifying this rock song’s presence in the Disco Lab): The Bombers’ version is very similar to the original, improving on Babe Ruth’s only by making it nearly twice as long. In 1983 hip-hop combo Funky Four offered an electro-rap version called “Feel It,” and the next year dance producer Jellybean did his own affectionate remake, even tracking down Jenny Haan to reprise her memorable lead vocal. Since then the samples, remakes, and homages have continued, most recently in the 2015 cover by Wu-Tang Clan’s GZA.

Babe Ruth’s original “The Mexican” is heard in the Netflix series The Get Down, but only as the end title theme for episode 4; sadly we’re denied seeing this wonderfully oddball hit placed in the context of the South Bronx scene. But we do know the song was a favorite of deejay and music consultant Grandmaster Flash; he included it on a mix CD of favorite tracks. Its inclusion here is significant; clearly Flash wanted to keep this Latin-funk gem in the spotlight and help “The Mexican” fight on to win over a new generation.