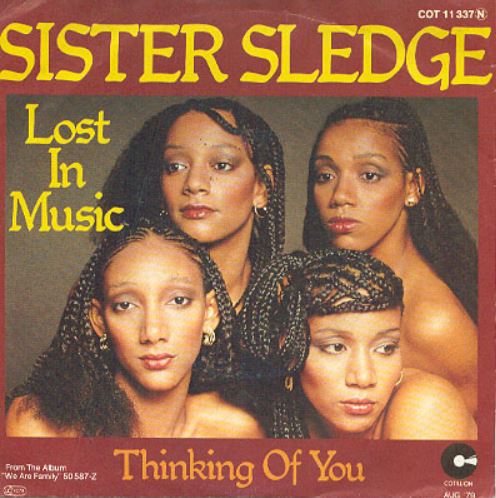 Disco Lab #36: Sister Sledge – ‘Lost In Music’ (1979)
Regardless of the results, good news: the election’s over! (At least I hope it is, hanging chads notwithstanding.) I think all of us could use some therapy at this point. No surprise, but Mr. Groove will take this opportunity to dig into that happy place right between the speakers… As we prepare to wrap up the 2016 Disco Lab experiment with holiday tunes next month, I realize I’ve only got a couple Saturdays left to share some of my personal favorites. “Lost in Music” is certainly one, a tune I adore both lyrically and musically.

The words describe a woman’s absolute obsession with performing live music (either as a singer or player), an addiction she’s helpless to kick. In spite of her loved ones’ concerns, she’s quit her day job and devoted everything to the thrill of being onstage: “I feel so alive,” she sings, because “music is my salvation.” In one of the most beautiful statements ever made about following your dreams, she defends her art: “It’s not vanity / To me, it’s my sanity.” (Article continues after song…)

The song could be the story of Sister Sledge back when they were just four teenage Sledge sisters starting a recording career way back in 1971. Though they met with middling success after some singles and a couple albums, some international notice led them to carry on. In 1978 Atlantic Records paired them with Chic producer/songwriters Nile Rodgers and Bernard Edwards and history was made; soon their smash anthem “We Are Family” would jump from the dance floor to the crowds at sports events, wedding receptions, and family reunions.

“He’s the Greatest Dancer” was also a significant hit, but to me “Lost in Music” is their finest hour. Or 4:42, I should say; no extended remix was created at the time, and a busy 1984 reworking loses the song’s magic. But the album cut is long enough and quite superb.

Unlike the album’s more playful hits, “Lost in Music” embraces a more serious musical tone, its moody chord progression suggesting being “caught in a trap.” Edwards’ bass work is as strong as ever and Rodgers delivers some of the longest, finest rhythm guitar patterns he’s ever created. (His playing here is very similar to his work on Daft Punk’s “Get Lucky” 35 years later.) The syncopated, almost polyrhythmic beat structure makes it hard to find the “one” beat (try counting 1-2-3-4 along with the track and see what I mean), giving the listener the delightful sense of truly being “lost in music.”

Since the idea of giving it all up for music is such a rock ‘n’ roll notion, I’m surprised that no guitar band has given this the rock-anthem treatment. (The Fall’s oddball 1993 cover isn’t quite what I had in mind.) As it stands, it’s still a great reminder of a place we can all hide in these post-election days: right there inside the grooves.