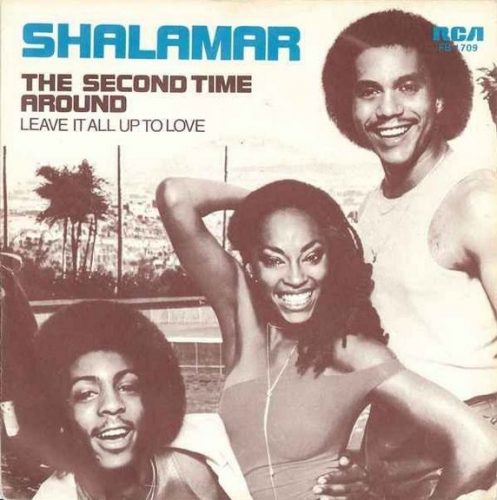 Disco Lab #25: Shalamar – ‘The Second Time Around’ (1979)
Hey, the Syndrum is back! We recently heard it played nonstop in Amii Stewart’s “Knock on Wood.” On this, the producer wisely lets the effect ebb and flow, rather than beating it to death. You know why? Because you miss things that go away and love them when they come back.

That’s actually the message of this infectious and sweet disco side, an ode to giving romance another shot. Here the singer takes total blame for whatever blew up their relationship and promises it’ll be so much better… the second time around. I don’t usually listen to lyrics — especially on disco records! — but I always follow this one’s candid, sincere storyline. (This makeup theme was explored earlier in 1979 on Peaches & Herb’s hit ballad “Reunited.”)

Put away those hankies; on to the music! This fantastic remix is bursting with goodness from that opening drumbeat. As a busy bassline is joined by tasty rhythm guitar, that Syndrum bounces around but fades away as the Rhodes piano enters. This opening minute is so splendid I almost don’t have to hear the rest of the record. (Almost.) (Article continues after song…)

After the song proper plays out and the vocals recede, the fun really starts. We get some fat synth action and more Rhodes. Oddly, one of the highlights of this rich-sounding record is a simple grand piano solo that follows, confident and beautiful. After another vocal chorus, we get an unusual stripped-down mix that combines the female title vocals with some fascinating male ad-libs. On top of this is a cool little part that sounds like guitar but might be keyboards? “The Second Time Around” is not only a great song in its single mix but an extremely creative extended version, with unheard parts and pieces coming and going unpredictably, to our great delight.

Some background on the recording: Shalamar started as a disco medley act (its “Uptown Festival” hit was basically a Motown grab bag). They met greater success with producer Leon Sylvers III, a member of the Jackson Five-ish family group The Sylvers (“Boogie Fever“). Sylvers later gave us the moody Whispers tune “And The Beat Goes On.” (“Beat”’s 1980 release regrettably puts it outside of the Disco Lab parameters, but it’s worth a listen, so seek it out.)

And the group name? Spelled differently but inspired by Shalimar perfume. And that’s appropriate, because this is one sweet-smelling disco record. Hint: it sounds even better the second time around…