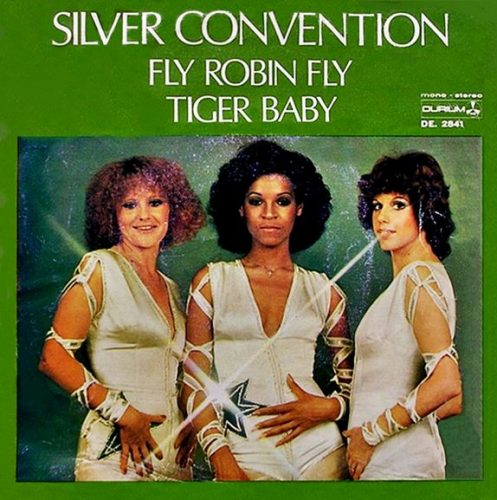 Well, that’s how it goes down around here, anyway. Though you might think of disco as a mostly American phenomenon, it was as big or bigger in Europe; disco’s seductive, simplistic beat and minimalist lyrics helped it travel well across the continent’s many borders. 1976 saw proto-disco records from Sweden (Abba, “Dancing Queen”) and France (Dalida, “J’Attendrai”). But before that in 1975, when American disco was just getting off the ground, Germany had already mastered the sound.

From Munich—the hometown of Oktoberfest long before fratboys— Silver Convention was a group of studio singers and musicians assembled by producer-songwriters Sylvester Levay and Michael Kunze. The group’s third single, “Fly Robin Fly,” was a worldwide hit and was the first US #1 record by a German group. Its lyrics set another US chart record. They featured the fewest number of different words in their lyrics: just six, a feat the group repeated precisely with its followup hit, “Get Up And Boogie.” That’s right!

With such a minimalist lyric, it’s no surprise that “Fly Robin Fly” is more of an instrumental a la Love Unlimited Orchestra’s “Love’s Theme” and MFSB’s “T.S.O.P.,” which also features a brief vocal passage. The minor-key verse section, in which said robin is vocally urged to take wing, alternates with a happy, major-key strings segment, seemingly portraying the bird’s flight. The long remix seems to be more of an edit, merely repeating these sections a few times. The last minute or so adds a unique passage featuring new interplay between string section and vocalists. (Article continues after song…)

After the Silver Convention, the “Euro-disco” movement (as it became known) really exploded. In the US (and likely worldwide), its most famous proponent was Giorgio Moroder, an Italian producer who worked in the Italian dance music industry. His production of Donna Summer’s “I Feel Love” might just be my favorite single of all time. Euro-disco thrived throughout the 80s and paved the way for many a new-wave synthpop act. But for now, let’s stay in 1975 and celebrate Oktoberfest with Silver Con. I don’t know if I could guzzle a one-liter stein of Spaten Märzen in “Fly Robin Fly”’s 7:39 runtime. But it seems like something to strive for. Oom-pah!