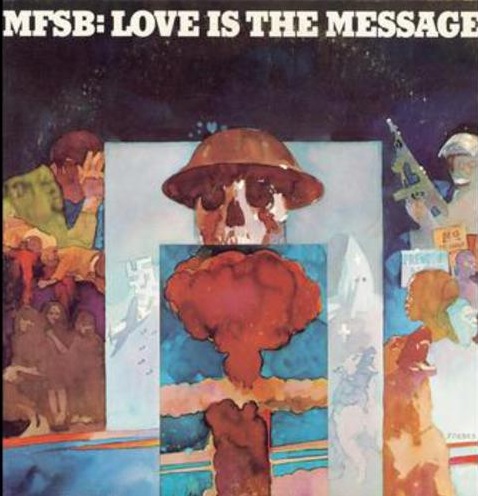 Disco Lab #22: MFSB – ‘Love is the Message’/’TSOP’ (1973 & ’77)
If you had to trace the disco movement back to a single song, a single record that inspired everything else, it would probably be 1973’s “Love is the Message” by a studio ensemble known as MFSB. (The acronym stood for Mother Father Sister Brother, though some cite a more profane reading of the initials.) The song was a by-product of the emerging Philadelphia soul sound that fused R&B rhythms with lush vocal harmonies, strings, and brass. The first major hits with this Philly sound were the Spinners’ “I’ll Be Around” and “Could It Be I’m Falling In Love” and Billy Paul’s ballad “Me and Mrs. Jones,” all from 1972.

These two acts featured rival production teams: the Spinners featured the talents of Thom Bell, while Billy Paul had the support of songwriter/producers Kenny Gamble and Leon Huff. In 1973 Gamble and Huff put some of Philly’s finest players in the studio to create the second album, Love is the Message, by imaginary band MFSB. This experimental, largely instrumental album actually yielded a major hit single (which we’ll consider shortly), but it was the album’s title track that became Ground Zero for the disco movement.

In the New York dance clubs (formerly discotheques, and soon to be called discos), it was this appealing blend of sweet harmonies and strings, positive sentiments, and solid 4/4 kickdrum beats that folks just couldn’t get enough of. And at the time, there was simply nothing else that sounded like it, so deejays played it over and over. Its original six-and-a-half minute album length made it perfect for dancing. (Article continues after song…)

MFSB Featuring The Three Degrees: ‘Love Is The Message’ (A Tom Moulton Mix)

With the dance clubs taken care of, another song from the album took over radio and television: “T.S.O.P. (The Sound of Philadelphia)” went to Number One on the Billboard Hot 100 and became the title theme for the Soul Train TV series. The minimal vocals were handled by Philly vocal trio The Three Degrees, who recorded another important early disco song, “When Will I See You Again,” in 1974. (Article continues after song…)

The two mixes presented here are not from the 1973 album but are 1977 remixes by the endlessly talented Tom Moulton, the man largely responsible for the extended disco remix format. As far as I can tell, they weren’t issued as a 12” single at the time, but they appeared on the 1977 remix compilation Philadelphia Classics. These two recordings were finally coupled on a 12”, however, in the 1987 CBS/Philadelphia International Mixed Masters series. And they certainly belong together, two slabs of essential disco history. Let’s get it on: it’s time to get down.