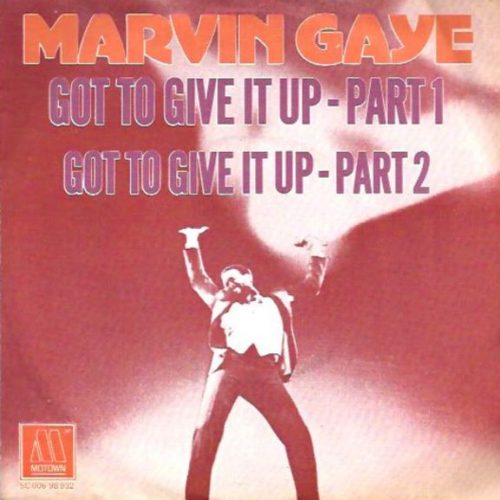 If you’ve heard this magnificent, minimalist party barnstormer recently, it was likely in its 4:08 7” single edit, dubbed “Part 1.” Here’s your chance to hear parts 2, 3, and probably 4.

This cool li’l groover was written by Gaye himself, in response to his label’s request to record a disco number. This isn’t quite disco in my opinion but funk, and sweeter than most thanks to Marvin’s slinky, sexy vocal. Happily, because this was recorded within the extended dance mix era, we have it in its full, almost 12-minute glory. (Note that this is a 12” that will never be rare, since it was issued as one side of a live double-album.)

Of course, this isn’t a remix at all but a full, long live take, likely an edit of one or more takes of the song. Marvin and several other players recorded the tune at his own Hollywood studio in December 1976. This elaborate yet minimalist track includes guitar, bass, keyboard, synth, cowbell, percussion, drums, but no funky horns or disco-ball strings. It’s like a cooler and more polite P-Funk record.

Marvin mixed it the following month, adding in a loop of party chatter not unlike that of his earlier hit “What’s Going On?” (Midway through the track, Marvin says, “Hey, Don!,” greeting the visiting Soul Train host Don Cornelius.)

The verse finds Marvin’s character as a party wallflower (hard to picture that!) who eventually relaxes and joins in the dance groove, later finding a female partner to boogie with: “You can funk me when you want to, baby.” At least that’s what I think he said…

Things to listen for in this blissful extended jam:

• Bass player cranking it up an octave at about 1:40 and elsewhere.
• Marvin ad-libbing vocals he later overdubbed with harmony parts (tricky!) at 6:45 and beyond
• Rhythm guitar borrowing from James Brown’s “Mother Popcorn” at 8 minutes and later.
(Article continues after song…)

Now about dat lawsuit… In 2013 singer Robin Thicke and producer/songwriter Pharrell Williams were successfully sued by Marvin Gaye’s estate, claiming that Thicke’s song “Blurred Lines” infringed on Marvin’s 1977 hit. I’ve listened to both records a lot, and I gotta say… I love Marvin and his family but man I do not hear it. Sure, a lot of elements were borrowed: the cowbell groove, keyboard rhythm, falsetto style, and party sounds. But the melody’s totally different.

Besides, “Blurred Lines” wasn’t the first record that ripped off Marvin’s. In 1978, the year after “Got To Give It Up,“ the Jacksons’ disco hit “Shake Your Body (Down To The Ground)” shamelessly stole Marvin’s chant “Let’s dance, let’s shout” (heard at about 9 minutes in) for its own chorus. To my ears, Marvin’s record sounds like it’s borrowing from Stevie Wonder’s “Boogie On Reggae Woman.” Steal from the best!

Finally, how about that title? Who’s giving up what? I’ve always thought it was Marvin attempting to shed his shyness and abandon himself to the funk. But it’s probably an exhortation to the crowd to give up their inhibitions — or perhaps to a lady friend to share a little lovin’. If you want to, baby.