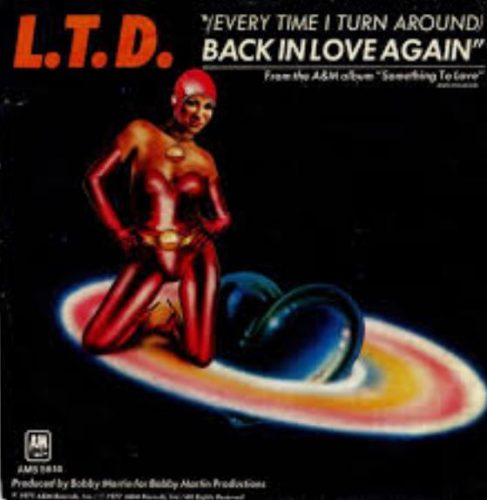 Disco Lab #11: L.T.D. – ‘(Every Time I Turn Around) Back In Love Again’ (1977)
What really makes this funk-dance record come alive is a sound you can barely hear. It’s a damped rhythm-guitar part, the sound that emerges when a guitarist mutes the strings with his left hand while strumming with the right, creating a scratchy percussion effect with no notes or chords. Listen close and it’s there from the very first note, playing 16 double-time beats to every 8-beat bar. (Article continues after the song…)

Hear it? I didn’t, until listening closely to the record’s very sparse breakdown at 5:51. Until then I was wondering: what makes this record so damn funky? Turns out it’s L.T.D.’s guitarist dry-strumming, very fast. (A more obvious hook is the quick bass “swoop” just before the chorus, first heard here at 0:24.)

The band’s name stands for Love, Togetherness, and Devotion; their togetherness kept them intact from Greensboro, NC, where they had formed as part of a Sam & Dave backup band, to their move to New York. In the Big Apple, they recruited lead vocalist Jeffrey Osborne, then drove to Los Angeles where they went on to significant success; “Back In Love Again” would be their biggest hit overall. (Osborne had a fairly successful R&B solo career through the ’80s but nothing I’m familiar with.)

Listening closely, this is more of a funk record than a proper disco number (no strings or characteristic hi-hat drum pattern). In fine funk form, the drums, bass, and Rhodes piano are locked tightly together. To please the disco crowds, perhaps, this disco version is drenched in reverb, unlike the tight and dry 7” mix (https://www.youtube.com/watch?v=FpglxyLjWzE). The extended passages simply find Osborne ad-libbing over the riff (“every time I turn around / my love jones comin’ down”), playing off the “right back, I’m back” backup vocalists. Brass, vocal, and rhythm elements ebb and flow freely in what sounds like a long, live session rather than an engineer’s canny edit.

Oddly, A&M Records wasn’t sure if this superb track was the pick to click. It was released as a double-A side with funky and festive “We Party Hearty,” with the latter slightly favored on the sleeve. Check out this flip and add a bit more love, togetherness, and devotion to your Saturday.