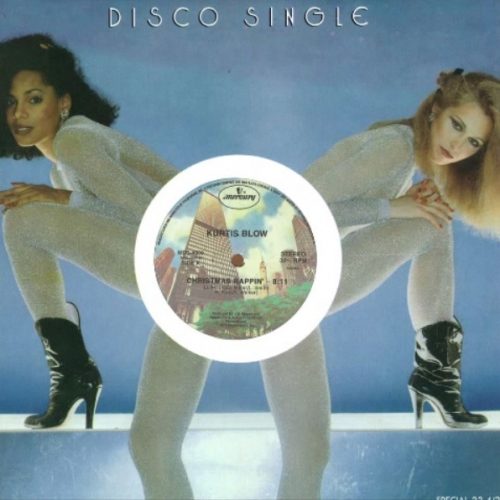 Disco Lab #41: Kurtis Blow, ‘Christmas Rappin’’ (1979)
It’s the Christmas season, and what better time of year to celebrate the birth of… hip hop? Today’s Disco Lab treatise looks into “Christmas Rappin’,” the second major hip hop record ever released — and very nearly the first. As any old-school child knows, the iconic “Rapper’s Delight” by Sugarhill Gang holds the honor of being the first hit rap song issued on vinyl. But “Christmas Rappin’” was conceived and created right alongside it; presumably only the struggles to find a label for the holiday release caused its delay.

For years at South Bronx block parties and nightclubs, emcees had been making up frivolous boasting verses and speaking them over looped rhythm samples provided by innovative DJs. But this new form of “beat” poetry had never been recorded — until 1979. Early that year, the Fatback Band had issued a rap B-side, “King Tim III (Personality Jock),” that had some success on the R&B charts but no national notice.

While Sylvia Robinson and her gang at Sugar Hill Records were cooking up their offering, future Run-DMC impresario Russell Simmons and some chums also had the idea to put the hip hop sound on vinyl, choosing a Christmas theme because they thought the “novelty of Santa Claus in Harlem would help overcome resistance to its being a rap record.” (This fascinating article details the whole “Rappin’” saga.) Simmons and company managed to peddle the end product to Mercury Records, giving “Christmas Rappin’” the distinction of being the first hip hop release on a major label. It eventually sold half a million copies but got buried in the hubbub over “Rapper’s Delight.”

Both songs borrowed the groove from the recent disco hit “Good Times” by Chic, (but played by other musicians); the Sugarhill record copied the riff so closely that the Chic songwriters demanded credit (and payment). Both records were issued in long versions on 12” records, and though today they seem light years away from disco, at the time they would have seen similar club play and sales to similar audiences. Hence “Christmas Rappin’”s scrutiny here in the Disco Lab. (Article continues after song…)

The rap’s first half describes Santa dropping in at Kurtis’ house party and partaking of the merriment therein, leaving behind “a new TV and a stere-you” as thanks. But the less seasonal second half is just as fascinating; it’s a rundown of lyrical refrains that had likely been circulating through the rap community for years: “Now just throw your hands in the air / and wave ’em like you just don’t care”; “Young ladies, all the ladies in the house say, ‘Owww.’” If I was Santa, I’d have stuck around, too!

Kurtis Blow went onto a bigger proto-rap hit with “The Breaks” a few months later, and in 1987 Simmons would finally have a hip hop holiday megahit with Run-DMC’s “Christmas in Hollis.” But for us, this is how the story ends… and to all a good night!