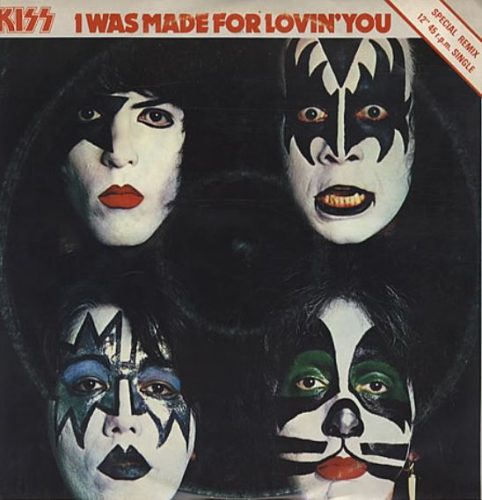 Disco Lab #21: Kiss – ‘I Was Made For Lovin’ You’ (1979)
Disclosure: Often, my favorite songs by an artist will be their “awful” commercial sell-outs; apparently I was the audience to whom they were selling out. Such is the case with Kiss’ much-maligned foray into disco circa 1979. Listening to it alongside other Disco Lab tracks, it doesn’t sound very disco at all: no hissing symbol, isolated kick drum, string overdubs, or female backing vocals. Instead, it’s a two-fisted, manly slab of upbeat boogie rock. At the time, the synth sequencers and LinnDrums may have seemed out of place, but in retrospect they anticipate 80s rock-dance records like ZZ Top’s “Sleeping Bag” and Jan Hammer’s “Miami Vice Theme.” (Article continues after song…)

In 1979, the band was at a crossroads; after Love Gun and the four solo albums, they needed outside input to forge a new path. Peter Criss introduced the band to Vini Poncia, the producer of Criss’ solo album. Vini had worked with Phil Spector in the 1960s and Ringo Starr in the early 1970s; he’d also played in soft-rock groups The Trade Winds and The Innocence.

Certainly Criss was shocked when his boy Poncia fired him from the recording sessions (after hand injuries, Criss’ drumming was deemed substandard). For the new album Dynasty, Criss was replaced with Anton Fig, later of Paul Shaffer’s band from the David Letterman TV shows. To craft a hit single, Poncia brought in a young songwriter, Desmond Child, who would go on to write hits for Aerosmith (“Love in an Elevator”) and Bon Jovi (“You Give Love a Bad Name”). Poncia, Child, and Kiss guitarist Paul Stanley quickly hammered out this lusty rocker, in part to show how easy it was to write a disco song!

Some sources indicate that only two Kiss members played on this record: Paul Stanley sang lead vocals and played both rhythm and bass guitar, with Ace Frehley contributing only the lead guitar solo. Gene Simmons’ contributions, if any, are unknown (backing vocals, perhaps). The remix seems to be purely a tape-splice job, with existing sections extended and repeated. No matter, this very un-disco dance record needs only length to succeed, and it does. I’d love to know how suburban disco crowds reacted when this nasty rampage followed up Donna Summer and Chic. For me, I love this bold sellout; like Paul Stanley, I can’t get enough!

So there you have it: five weeks of rock-gone-disco to heat up your July. See you next week with more dancefloor hits that are purebred disco all the way!