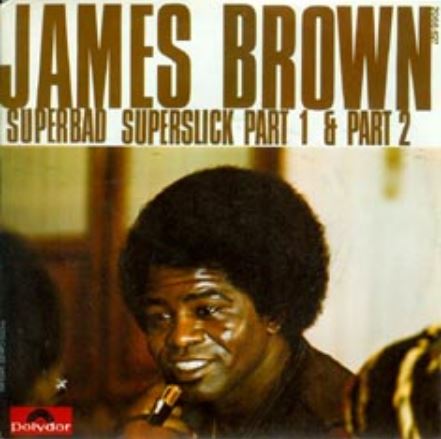 Disco Lab #10: James Brown – ‘Superbad, Superslick’ (1975)
Today’s track isn’t a remix, it’s not really a disco song, and it was never issued as a 12” single. So why is it under the Disco Lab microscope? It’s here as an object lesson of how disco evolved out of funk music (among other sources). And it’s disco-long and disco-cool.

Enter James Brown, the guy who around 1969, after a decade of killer R&B records, virtually invented not only funk but long-format dance music as we know it today. He shrugged off the shackles of pop song structure, coercing his talented bands through instrumental improvisations on tightly wound one-chord riffs that could be extended endlessly. These were usually intense, fast-paced, and sweaty; Brown’s 1970 hit “Super Bad” (see below) is a great example. Please give a listen if you’re unfamiliar with it.. (Article continues after video.)

Five years later, disco music had emerged in Philadelphia and then New York, appealing to gay, Latino, and female crowds as well as black and white straights. To appeal to a broader audience, disco was a bit cooler and more polished than the wild, two-fisted funk James had been turning out. He decided to chill out and chase the dancers with a 1975 album called Everybody’s Doin’ The Hustle & Dead On The Double Bump. This embraced the nascent disco rhythms, notably on a dance-floor remake of his decade-old hit “Papa’s Got A Brand New Bag.” He also remade “Super Bad” into a much more laid-back groove as “Superbad, Superslick” (the latter word seemingly describing glossy disco production styles). (Article continues after video.)

For starters, the intense funk manifesto has been slowed almost 20%, to 104 beats-per-minute from the original’s 126 bpm. It’s not really a disco rhythm but the record has a lot of disco-production qualities. The song now features flutes and female backing vocalists, likely inspired by Van McCoy’s hit “The Hustle” from earlier that year (though flutes and vocals are closer to Isaac Hayes’ seminal “Theme from Shaft”). The 1970 record’s punchy, percussive horns and lead guitar here are replaced by gently rolling rhythm guitar and drums. Almost sleepily, JB summons Fred Wesley for a trombone solo and then donates an organ break of his own.

More than anything, Brown’s laidback attitude is what makes this record. In 1970, he had a bone to pick; by 1975 he had nothing to prove. He was already the Godfather of Soul, after all. The ways in which Brown catered to disco crowds without selling out are fascinating, and we’ll visit another JB “disco” track (this one an actual 12”) in the months to come.