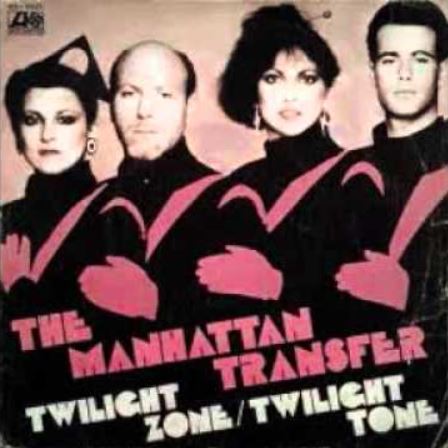 Sometimes disco was futuristic (robots controlled by the beat) and sometimes it looked to the past (New York high society steppin’ out to mingle). The retro vibe gave a boost to The Manhattan Transfer, a swing-vocal combo formed in 1969 who found a surprise hit with the gospel number “Operator” in 1975. For a few years, the group’s retro ’20s-’30s sound struggled to have hit records in the US, though they broke through consistently in the UK.

All this would change with the group’s fourth album Extensions. One cut, the disco-inflected medley “Twilight Zone/Twilight Tone,” became a surprise hit for the group. It fused the trademark Transfer vocal sound with a spooky, mystical vibe. Extensions was released on Halloween, 1979, which meant that the diehard MT fans had a great supernatural dance party jam for the evening. Everyone else had to wait a year because “Zone/Tone” wasn’t issued as a single until 1980. (Article continues after song…)

“Twilight Zone/Twilight Tone” fuses the theme from the ’60s TV show Twilight Zone with an eerie new composition. Its title perhaps inspired by Duke Ellington’s “In A Mellow Tone,” “Twilight Tone” describes a magical piece of music that sucks its listeners “through a tunnel of the mind” into some alternate dimension. The third verse suggests that swing-band leader Glenn Miller’s 1944 disappearance over the English Channel led to him “play[ing] trombone in the mystic unknown zone.” (Manhattan Transfer had a UK hit years earlier with Miller’s “Tuxedo Junction.”)

The first minute or so of the record recreates the famous Twilight Zone TV theme, complete with ersatz Rod Serling narration; “Rod” returns later to set the stage for the Glenn Miller segment. (Serling passed away in 1975; one wonders if he’d have been flattered to have been immortalized on a dance record.)

The 6:22 remix (extended only slightly from the 6:05 LP version) plays through the TV intro and the first two verses, then lapses beautifully into a guitar solo. A breakdown picks up the Herrmann theme again via a couple different guitar lines, bringing us into the Serling reprise. After the Glenn Miller section, the record ends disappointingly with endless repetition of the “here in the twilight” lyric, perhaps of interest to present-day vampire-fiction fans but boring to everyone else. At least a boogie-woogie piano solo creates some interest.

This bright and energetic number does a good job of propelling a Halloween party into a “pyramidal locomotion from a mystic unknown zone.” And that’s before the jello shots!