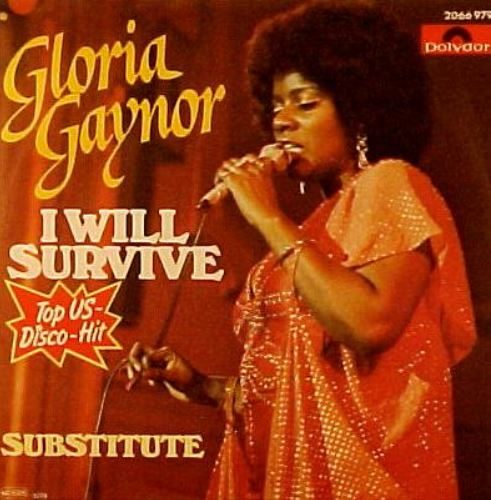 Disco Lab #35: Gloria Gaynor – ‘I Will Survive’ (1978)
In case you haven’t heard, it’s election day on Tuesday. No matter who wins, a lot of people will be bummed out that their candidate lost. And given the unpopularity of both players within their own parties, some will even be unhappy that their guy or gal won! So it’s time to bring out a heavy anthem of personal endurance to get you through Tuesday night, Wednesday morning, and the next four (or so) years. Just in case.

Enter Gloria Gaynor, who in 1978 had been burning up the dance floor for four years. She’d had a number of sizzling disco hits but only one that succeeded on the pop charts, her version of the Jackson Five’s “Never Can Say Goodbye.” She stepped up to the mic to record another cover, a respectable version of the Righteous Brothers song “Substitute.” Oh, and Gloria, we’re gonna need a B-side. Some songwriters gave us a number to try out. It’s called “I Will Survive.”

Perhaps due to its status as a flipside track, producers didn’t spend too much time on “I Will Survive.” It sounds like the rhythm section was recorded in a single take with little studio trickery, with Gaynor’s lead vocal, brass, strings, and harp added in subsequent passes. Unusually for the disco era, there are no backing vocals, and the sparse mix is raw, angry, and proud. (Article continues after song…)

The intro, of course, is a real stopper: “At first I was afraid / I was petrified,” sings Gaynor over a legato piano backing, sounding like a torch number or Broadway tune. The 4/4 disco kickdrum enters quickly and we’re off for eight minutes of proud defiance. Gloria describes how a breakup left her devastated and weak until she discovered her inner strength: “I’ve got all my love to give, I’ve got all my life to live.” She sounds delighted to throw her newfound personal power right in her ex-lover’s face.

The remix runs through the single edit, and after a brief strings-and-horns break, the whole song repeats! The second time through, the mix is even more minimalist and funky, and it sounds like Gaynor did a second (or continued) take on the second-half vocals.

Of course “I Will Survive” went on to become both a feminist and gay anthem, as well as a rallying cry for the downtrodden and disappointed. Which in a few days will be a whole lot of Americans. If you and I are among those, not to worry. As long as we know how to love, I know we’ll be alive.