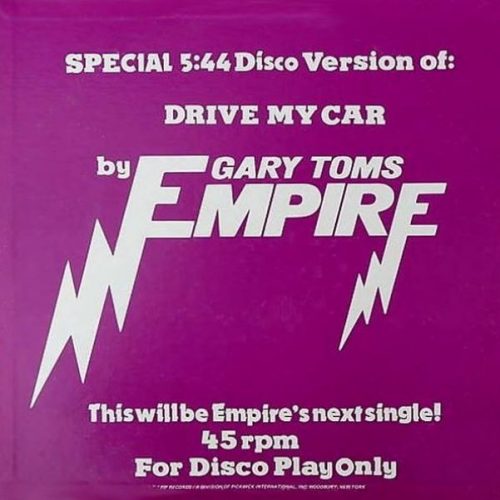 Disco Lab # 14: Gary Toms Empire – ‘Drive My Car’ (1975)
To us, the Beatles’ 1970 breakup seems ages ago, but in 1975 it was recent history. Music acts had successfully translated Lennon-McCartney songs into the funk, R&B, and jazz realms anyway; why not drag the Fab Four (kicking and screaming) into the newly emerging disco scene, too?

Actually, since it was conceived as a funky R&B tribute by the Beatles, this Rubber Soul number dating back to 1965 translates beautifully into a dance record. Gary Toms, a former sideman of jazz organist Jimmy Smith, has lots of fun with it. For accompaniment to the rhythm he adds a fat sax combo, possibly inspired by the Beatles’ 1966 record “Got To Get You Into My Life.” That Beatles recording was released as a single for the first time in 1976; its huge success launched a Beatles mini-revival in the late ’70s. 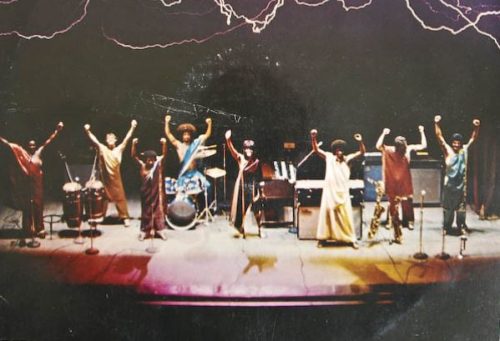 Gary Toms Empire in all their 1975 glory.

The wry, sexually provocative lyric is perfect for disco’s flirty dancefloor feel, too. Here, as with most disco records, it’s sung by a woman, with appropriate gender reversal in the lyrics (here it’s the guy who wants to be a star and the woman who plays chauffeur). The playful feel gets downright silly with overdubbed vintage klaxon and bulb auto horns near the end. (Article continues after the song…)

This throwaway Beatles cover was a very minor hit (#69 on Billboard) but made history as a 12-inch single; it was one of the first disco promos to be released in that expansive format, proudly stating “disco mix” on the label before that became self-evident. It adds length with some funky breakdowns: first a twangy ghost guitar and congas, then a little clavinet solo, then a cowbell and tom-tom break with scatting Sly-and-the-Family-Stone type vocals.

This version of “Drive My Car” wasn’t the only disco/dance remake of the song. New York no-wave singer Cristina did a couple versions circa 1980 (one featuring actor Kevin Kline!), and Gina X did a similarly artsy remake in 1984. So Gary Toms was ahead of the curve on the 12” single trend, the Beatles revival, and the Drive My Disco groove. I’d say his prospects were good!