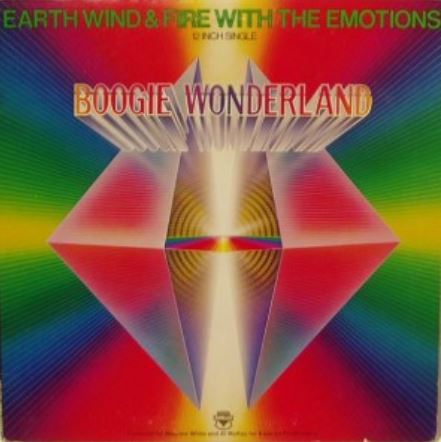 Disco Lab #13: Earth, Wind & Fire With The Emotions – ‘Boogie Wonderland’ (1979)
If the sleeve of this 12” single could talk, it would say, “When the forces align, the pyramid shall open and the wonderland be revealed.” In this case, the forces are two great R&B vocal combos, the male Earth, Wind & Fire and the female Emotions. EWF had been having hits steadily throughout the decade; the Emotions are best known for 1977’s disco smash “Best of My Love,” but had been cutting records since 1962! These forces had actually aligned before; EWF leader Maurice White co-wrote “Best of My Love” and co-produced its parent album. Given its punchy brass sound I wouldn’t be surprised if Wind, Fire, and/or Earth actually played on it too. (Article continues after song.)

And what is this Wonderland they speak of? Why, it’s nothing more than your neighborhood discotheque, a place of “vinyl dreams” where “all the records are playing” (sounds like my house!). The lyric poetically describes guys and gals escaping from their lonely boredom: “Midnight creeps so slowly into hearts of men who need more than they get.” But at the disco, “all the need to be loved can’t be wrong.”

Listening to this alongside other disco records, what really jumps out is the unusual double-time rhythm that underpins it all. I guess by 1979, audiences were becoming weary of the heavy downbeat of disco and wanted something different than the usual thump-thump-thump. To provide some relief, “Boogie Wonderland” adds an unusual upbeat: thump-a thump-a thump-a. The record seems to borrow the Latin groove and syncopated keyboard sound of War’s “Low Rider” from four years earlier. Latin music is the secret source of so many great disco beats, so it’s a natural fit here.

The Latin feel is also carried through in the timbale overdubs on the back end of this very long remix. The Emotions really carry this second half, with repetitions of the “I find romance” bridge. The record also prominently features a very hard-working string section. Strings are often found adding a classy, uptown feel to many disco sides; here they nicely balance EWF’s native horn section. It’s an irresistible mix and, though not the biggest hit for either group (it only went to #6 on the Hot 100), it evokes the era like few other records. See you for last call down at the Opened Pyramid!