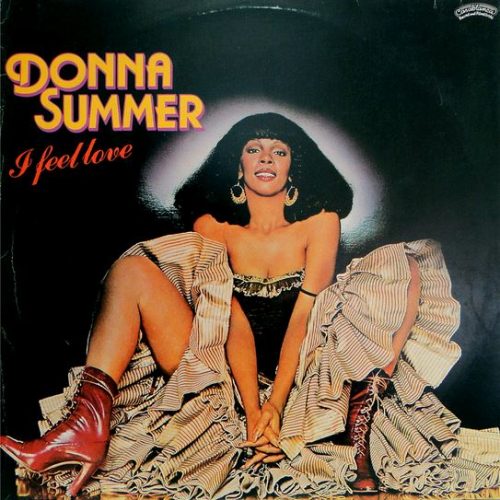 Disco Lab #38: Donna Summer – ‘I Feel Love’ (1977)
If you’d told my teenaged self, weaned on respectable rock and pop, that my favorite record of all time would be a Donna Summer song, I’d have laughed cynically. Yet here we are decades later with what I feel are the finest few minutes of Earth audio ever, “I Feel Love.”

In the fall of 1977, exhausted from college night classes, I’d sit in the dark and listen to the radio — no books, no distractions. Compared to Linda Ronstadt’s staid “Blue Bayou,” this Donna record was sheer amazement. I was really blown away by the instrumental track underneath Donna’s vocals: was it really all synthesizers? Could you really make a whole record out of synth beats? (Kraftwerk and other Kraut-rockers had been doing it for a while, but this was news to me.)

Credit the song’s innovator, genius Giorgio Moroder, the Italian producer based in Germany who set the stage for our present-day EDM (electronic dance music). On French dance duo Daft Punk’s 2013 album Random Access Memories, Moroder reveals his early origins: “I wanted to do a album with the … sound of the future. And I said: ‘Wait a second—I know the synthesizer!’” In addition to most of Donna’s hits, Moroder gave us many records under his own name (sometimes as just Giorgio) as well as the Munich Machine project.

But in my opinion, this song is his absolute pinnacle. To me “I Feel Love” is a song about man’s relationship to technology. Donna’s surrounded by these ostensibly menacing synth beats and pulses, but instead of being terrified, she’s ecstatic (“it’s so good”), and not even in a sexual way. She’s swept away joyously on this robotic torrent of “fake” sounds, and that’s something I hadn’t heard before (nor since, really).

The core of the record is the throbbing, synthetic bass line you hear first; it carries through from start to finish, accompanied at time by swirling synth chords, percussion and keyboard hits, and Donna’s vocal. After a normal pop song’s length of three minutes, the song begins to fade… but then that pulsing bass figure lingers, and it starts all over again! Incredibly, the radio (and 7”) version runs a very long 5:50. The 12” version gives you all that, then plays that 2:30 coda a second time to stretch the duration out to 8:15. (Article continues after song…)

The durability of “I Feel Love”’s futuristic sound was proven eight years later in a cover version by Bronski Beat & Marc Almond. Though the remake offered male vocals and a varying tempo, the chugging synth-sequencer sound was recreated faithfully (if it ain’t broke, don’t fix it). 39 years later, it still sounds like a record from the future. Much to the amazement of my teenaged self.