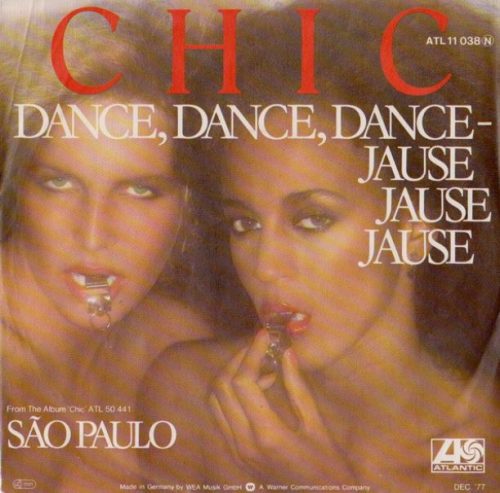 Disco Lab #15: Chic – ‘Dance, Dance, Dance (Yowsah, Yowsah, Yowsah)’ (1977)
First question: What’s a “yowsah”? Possibly derived from “yes, sir,” it’s an expression of amazement, something like “holy cow.” The phrase dates back to the 1930s, but more than likely, the guys behind Chic heard it from the emcee in They Shoot Horses, Don’t They?, a 1969 film about ’30s dance marathons. Or they might have picked it up from a similarly themed 1976 episode of Happy Days, in which Richie Cunningham exhorts dancers with the saying.

It’s amusing that Chic would see the disco phenomenon as the modern equivalent of the Depression-era dance marathon, where exhausted, impoverished dancers would compete for desperately needed cash prizes. And this was only the group’s debut single; pretty early for them to be so jaded! But disco always had a bit of a ’20s-’30s feel anyway, with its longing for glamorous excess and taste for illicit thrills.

In some ways Chic were the very best thing to come out of the disco movement. The group was formed by bassist Bernard Edwards and guitarist Nile Rodgers, inspired by the Roxy Music’s style and Kiss’ image. As well as several hits by their own group, Rogers and Edwards made excellent dance music with Sister Sledge, Diana Ross, and others.

Surprisingly, given the band’s incredible creativity, this debut is a bit derivative, reminiscent in feel and even melody to Silver Corporation’s 1975 disco classic “Fly, Robin, Fly.” You get the sense that Nile and Bernard heard the earlier record and improved on it by speeding up the tempo and adding lyrics about dancing. Subtlety was never one of disco’s strong suits. (Article continues after song…)

The breakdowns in the second half are fun, including a wobbly-sounding synth keyboard solo. But it’s the rhythm guitar section at 5:39 that makes it for me. What I most love about hearing Chic records is listening to Rodgers’ endlessly innovative guitar playing, and his riffing here is otherwise buried in the mix. Rodgers, of course, went on to produce hits for Madonna and David Bowie, among others. His fine fretwork can be heard in the recent Daft Punk hit “Get Lucky.” That’s Nile, now 63 and still kickin’ ass. Yowsah!