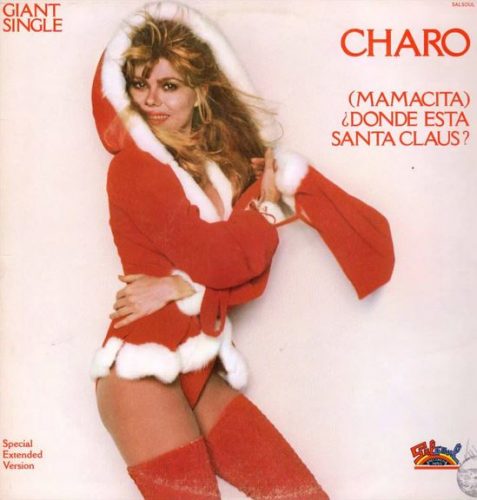 Disco Lab #42: Charo, ‘(Mamacita) ¿Donde Está Santa Claus?'(1978)
It’s Christmas Eve in the Disco Lab! We’ve got tinsel on the turntables, spangles on the speakers, and poinsettias on the playback gear. There’s only one thing missing, the fat man with the beard and the dancin’ shoes.

To those who watched talk shows, one of the most iconic figures of the 1970s was feisty Latina lady María del Rosario Mercedes Pilar Martínez Molina Baeza, better known by the stage name of Charo. This petite Spaniard came to fame in the 1960s, singing, dancing, and playing flamenco guitar on Johnny Carson and Ed Sullivan. She married bandleader Xavier Cugat in 1966 (if we are to believe Charo’s birth-year claims, she was all of fifteen at the time). Thanks to oversaturation on chat programs and guest shots on TV comedies, she became better known as a lively, outrageous public personality than as a musician or singer. She signed to New York disco label Salsoul in 1977 and released an album named after her signature catchphrase, “Cuchi Cuchi.” A holiday disco number seemed called for, and Salsoul had just the song… (Article continues after song…)

Picking up on the annoying 1950s trend of Christmas songs sung by kids (the great Brenda Lee being the exception), “(Mamacita) ¿Donde Está Santa Claus?” was a 1958 hit for Augie Rios, who at age 12 was probably even shorter than the 5’4” Charo. Sung by a kid, the lyrics are an understandable query about Santa’s whereabouts. (Apart from the music and the Spanish title lyric, the only Latin aspects of the song are Claus’ castanets and reindeer named Pancho and Pedro.)

With Charo singing, however, Mamacita becomes truly surreal: a grown woman looking for Santa? At a disco? It starts to become more a tale of a frisky Latin nightclub dancer seeking out a sugar daddy. In real life Charo divorced Cugat earlier this year, remarrying a few months later. Guess she found her new Santa.

The overlush Salsoul arrangement is drenched in strings, brass, female chorus, marimba, and (you guessed it) castanets. To be honest, it’s a bit much, especially with Charo’s high-energy vocal driving the whole sleigh. But I always look forward to the tasty breakdown with harp, and later the bass-piano riff answered by fuzz guitar and woodwinds. In fact, the best thing about this crazy record is right there on the label: “A Tom Moulton Mix.” Moulton was behind some of the best disco mixes of the 70s and early 80s, and he really shines on this (too brief) instrumental passage. To sample his fine work with less cuchi-cuchi, check out the instrumental on the flip side.