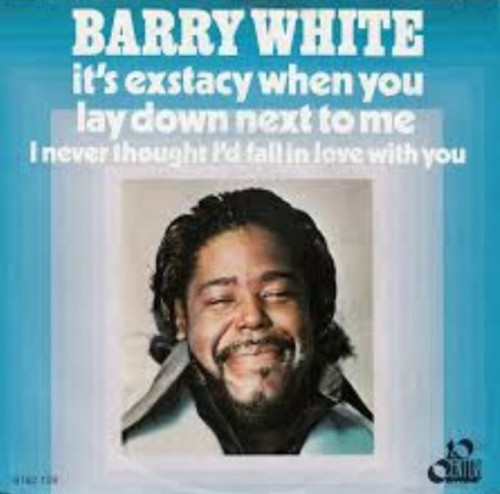 Disco Lab #4: Barry White – ‘It’s Ecstasy When You Lay Down Next To Me’ (1977)
I used to find Barry White gently amusing, more cuddly than sexy. Nowadays I have nothing but respect for the man: his records were intricately constructed, and he sure knew his way around a groove. He was among the first to combine solid funk rhythms with strings and horns, a pioneer of disco as we know it.

Most of his hits that came out as short 45rpm versions also existed as long 7-8 minute LP cuts, but this is the only one I’ve ever seen as a standalone 12” single, issued that way in disco watershed year 1977. It’s well worth your while.

The build to the vocal is textbook Barry. It starts with just kick and hi-hat, slap bass, and a sexy, impatient piano riff. The strings come in for the record’s hook, an urgent swirling riff. And when Barry finally shows up at 1:15 along with the snare drum and some funky bass, it’s a great release (dare I say ecstasy?) of the tension that’s built up.

At about 3:54 the record moves into its Part Two, which as with Prince and James Brown, proves to be mostly instrumental jamming around a one-chord riff. Buried slightly in the mix are lead guitar and organ, very nice. At 5:17 Barry returns to give us some dazed ad-libs on the chorus lyric. And when he moans, you better listen. The man is no joke.