Aretha’s gone, but she left a vast recorded legacy to comfort us. Since this superb, eclectic album exhibits so many of her strengths, it’s a great way to remember this once-in-a-lifetime singer.

She could sing anything. It’s often said of Aretha that she could sing the phone book and bring you to tears. Not true; she had to be passionate about her material. But when she connected with a song, as she does throughout Young, Gifted and Black, look out. (Decades later, she even took a shine to classical numbers; look up her assured last-minute performance of Puccini’s “Nessun Dorma” at the 1998 Grammys.) 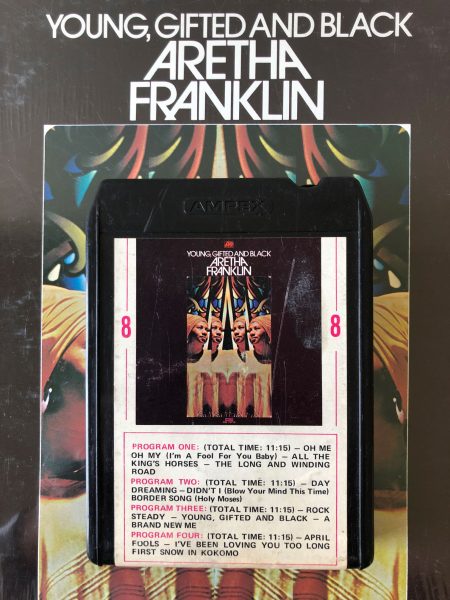 She played piano like crazy. Many people don’t think of Aretha as a pianist but man, was she. Aretha was self-trained and played by ear from an early age, performing note-for-note copies of famous jazz solos to amuse her dad’s friends. She credits Errol Garner as a particular influence; family friend Art Tatum was likely another. Aretha noodled a bit on her Columbia and earlier Atlantic albums, sharing duty with Spooner Oldham and others, but she plays wall-to-wall on the Young, Gifted and Black LP. Her ability on piano certainly helped her to build arrangements and illustrate them to her band. 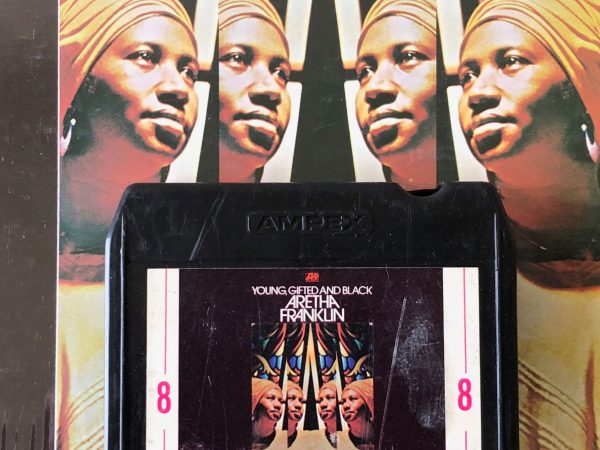 She may have invented disco (but don’t hold that against her). Aretha’s brilliant “Rock Steady” bears most of the trademarks of the disco sound that emerged over the next few years: signature hi-hat pattern, syncopated bass, 4/4 rhythm, and lyrics about dancing (“I might be doin’ this funky dance all night”). Long before Manu Dibango or the O’Jays, Aretha launched this bold new sound alongside Isaac Hayes’ “Theme from Shaft,” released a couple weeks earlier. However Aretha seems to have got there first with her sizzling take on “Spanish Harlem” months before. (Both “Rock Steady” and “Spanish Harlem” feature the killer rhythm section of Bernard Purdie on drums and Chuck Rainey on bass alongside genius guitarist Cornell Dupree. This trio, which plays on about half the album’s songs, is joined on “Rock Steady” by Donny Hathaway on organ and Dr. John on percussion.)

She was a gifted songwriter. Though most of Aretha’s hits were by outside songwriters, she wrote some of her most famous numbers, including “Dr. Feelgood,” “Call Me,” and “(Sweet Sweet Baby) Since You’ve Been Gone.” A third of the tracks on Young, Gifted and Black are Aretha-penned, including the amazing singles “Rock Steady” and “Day Dreaming.” But I’m really drawn to her quiet torch number “First Snow in Kokomo,” a jazz memoir that’s a template for Tom Waits and Rickie Lee Jones. In her affectionate, playful lyrics, Aretha describes early years touring with a brass combo, then recounts (or ponders) their later lives. Truly touching.

She didn’t stick to soul material. Rock, soft rock, pop, country, singer-songwriter — Aretha didn’t care about labels; she was just hungry for great songs. On her Live at Fillmore West album released just before this, she covers Stephen Stills (“Love The One You’re With”) and Bread (“Make It With You”). Here she draws a third of her material from outside the soul/R&B tradition, with tunes made famous by The Beatles, Lulu, Elton John, and Dusty Springfield.

She’s underappreciated as a jazz vocalist. We take for granted how many great notes sung by Aretha were not the ones on the sheet music. Try this: hum the melody of “The Long And Winding Road” (the Beatles version). Now go to the video below and hear what Aretha does with the tune. She doesn’t just add grace notes here and there, she rewrites the melody —ON THE FLY— to suit her style. She also changes the cadence and makes up new words. Just for fun. Because she can. Because she’s Aretha.

She loved to reinvent a song. It’s one thing to cover a pop tune. It’s another to completely rework it from top to bottom. But again and again, Aretha did just that. The Delfonics’ original “Didn’t I (Blow Your Mind This Time)” is slow, sweet, and gentle. But Aretha saw fit to juice up her version with Dupree’s double-time guitar rhythms on the verses, making it much more invigorating and, well, mind-blowing.

She never strayed far from gospel. It’s often said that Aretha never “returned” to gospel because she never left the church. A prodigy vocalist with her minister father’s Detroit choir, she had gospel in her bones from a very early age. Gospel songs and a gospel feel pervade her entire career. Just before this album, she had a hit with the church-tinged “Spirit in the Dark”; just after, she recorded the breakthrough live gospel album Amazing Grace. Here the spirit feel is most notable on the Elton John cover “Border Song (Holy Moses)” and especially her take on Nina Simone’s “Young, Gifted and Black.”

Her “happy” voice is one of the sweetest things on earth. On her classic Atlantic hits, Aretha’s versatile voice spanned a wide range of emotions: anger, lust, heartbreak. On the Young, Gifted and Black album, she relaxes into a peaceful, assured joy that’s truly uplifting. On “Oh Me Oh My (I’m A Fool For You Baby)” and “A Brand New Me,” she’s happy and it shows. But for me, “Day Dreaming” is the standout. She wrote the song about a long limo trip with beau Dennis Edwards of the Temptations, and clearly it was quite a ride. Her voice is so open and exuberant, you really can feel her “mind floating away.” (And listen to those tinkling piano chords on the song’s intro—classic Aretha.)

(The 8-track changes the song sequence greatly, shifting “Day Dreaming” and “Rock Steady” to later in the album, where they turn up as nice surprises. The new program is just fine imho, and I like that it now ends on the gentle and poignant “First Snow in Kokomo,” a perfect closer. This Ampex tape sounds great and doesn’t break any songs. Recommended!) 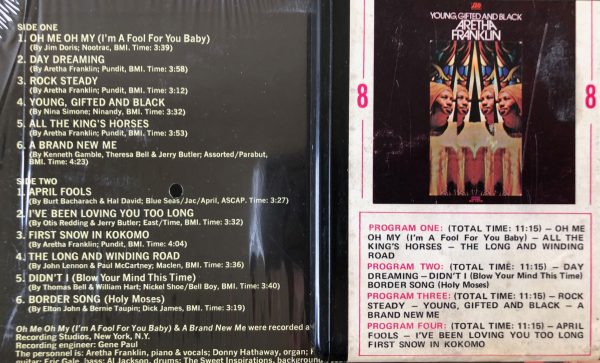