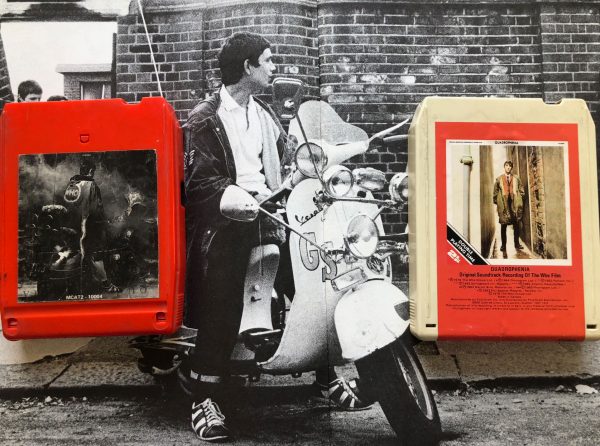 From the start Quadrophenia was conceived as a film, albeit for your ears only. By 1972, the Who’s story-driven Tommy and Lifehouse had failed to materialize as movie projects (though the latter yielded the superb Who’s Next). So Pete Townshend aimed to create the band’s most cinematic work yet. He set Quadrophenia in the real world (East London and Brighton, UK, circa 1965) and created a fallible, unstable young hero that rock fans could identify with. To share this mental movie with his audience, Townshend wrote a liner-notes short story and commissioned a lavish photo insert, both chronicling the adventures of Jimmy the Mod, a fictional Who fan from back in the day.

Here’s the story: Jimmy Cooper’s back in London after a splendid trip to Brighton with his mod mates, where he beat up rockers and shagged a fabulous bird. But now his life sucks: he’s at odds with his parents and his crap job, and the only things that bring him joy are his mod friends, his Lambretta scooter, and handfuls of “purple heart” speed pills. Frankly, the lad has become unglued, and when he sees a mate stealing his girlfriend, Jimmy smashes his own scooter and hops a train back to Brighton, his happy place. Crushed at seeing a top mod now working as a beach hotel flunky, Jimmy steals a boat and heads out to sea. But his drunken suicide bid instead becomes a rebirth, and he starts to put his split personality back together.

To add to the album’s cinematic depth, Townshend taught himself violin and cello, layering them atop his own synth parts and bassist John Entwistle’s brass work for a full orchestral sound. He also wrote four musical themes representing each of the band members (and parts of Jimmy’s broken psyche); these recurring themes unify the album greatly, giving it a progressive-rock feel. Because most songs are written from Jimmy’s angry, anguished point of view, they stand alone nicely outside the narrative. They’re tunes you can enjoy by themselves or put in a mix, unlike those of most rock concept albums (I’m looking at you, Tommy, The Wall, and The Lamb Lies Down On Broadway). In particular, “Drowned” has endured as a live favorite.

Though the 1973 Quadrophenia album was well received, no film project was launched at the time, though 1969’s Tommy was made into a successful 1975 movie. Finally, in 1978 a film version of Quadrophenia was launched along with band documentary The Kids Are Alright, just as the album Who Are You and drummer Keith Moon’s death brought public attention back to The Who. 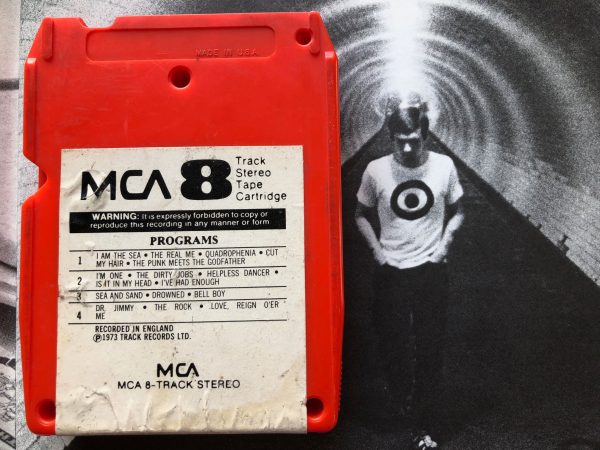 Townshend gave director Franc Roddam full rein to make the film he wanted. Consciously avoiding the Tommy film’s camp decadence, Roddam created an authentic, gritty portrait of mod life in the mid-’60s. He stuck close to the Quadrophenia storyline, embellishing it with new events and characters and rearranging plot points as needed. For visual reference Roddam relied heavily on the LP’s photo book, even recreating some images within the film. Crucially, he cast talented newcomer Phil Daniels in the demanding role of wide-eyed Jimmy, as unstable as ever.

Surprisingly, the director discarded most of the music from the Quadrophenia album — this would be no rock opera nor extended music video. He used only half the songs, mostly as fragments; save for its song-packed finale, the movie goes for long stretches with no Who music at all. At the time I was shocked by this choice, but in the decades since I’ve recognized its brilliance: the film and album both inform one another. If you’re a Who fan, the movie serves as an extended photo book; if you like the movie, the 1973 album provides greater insight into Jimmy’s fractured mind as a kind of commentary track.

Though the Quadrophenia movie used the original Who recordings, there was still demand for a new soundtrack album, which happily turned out to be more than just reheated Who tracks. It includes seven maximum-R&B and pop oldies heard in the film (throw your own mod party!). The nine Who songs featured in the movie are presented in story sequence; diehard fans were thrilled to hear three unheard songs from the original album project, including the splendid 1973 outtake “Four Faces.” (Two more discards were rerecorded with Kenney Jones on drums, subbing for the fallen Keith Moon.) 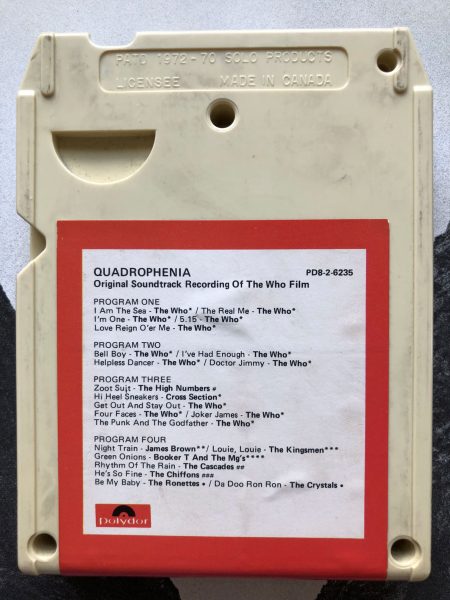 Not only is the Quadrophenia soundtrack a fun listen, it provides a handy Cliff’s Notes version of Townshend’s original work for impatient mod newbies. (And there were plenty of noobs; the powerful film and popular soundtrack spawned a massive late ’70s mod revival in the US and UK. Invasion of the scooter boys!)

The 8-tracks of these double albums are also superb. Amongst track-o-philes, Quadrophenia is famous as an 8-track that needed no resequencing or editing to fit on a cartridge: incredibly, all four original LP sides are nearly identical in length, so you can just pop in the tape and enjoy the whole mind-movie in one sitting. The soundtrack cartridge also preserves the LP sequence, though adding a bit of silence between songs to fill out the shorter sides. Sadly, no Lambretta GS scooters were produced with built-in 8-track decks, so you’re on your own, cousin. 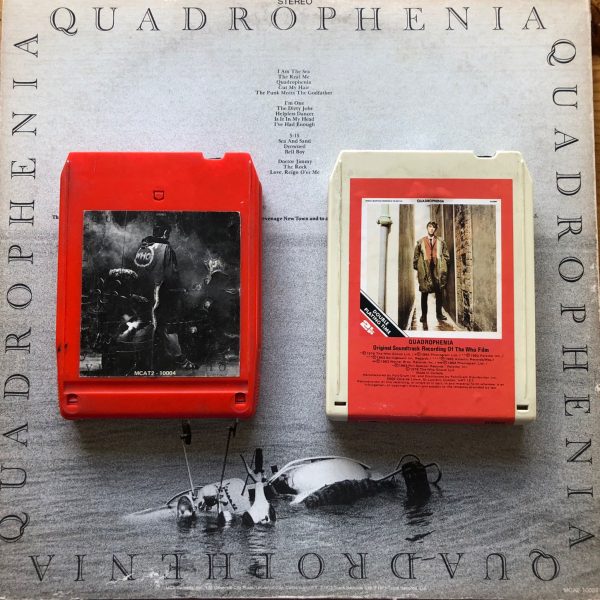 You can read last week’s installment here: The Chi-Lites, ‘(For God’s Sake) Give More Power To The People’ (1971)