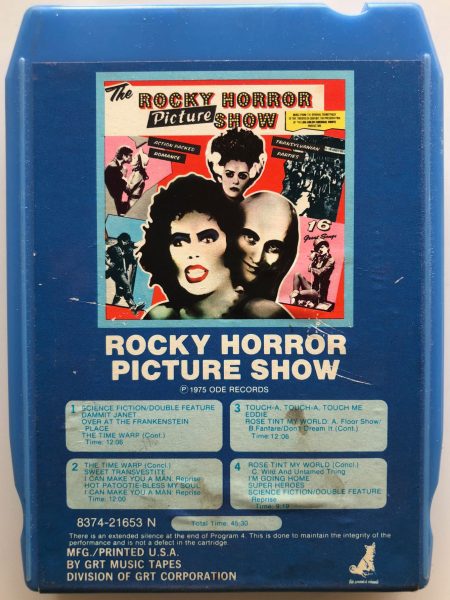 It’s the same old story: boy meets girl, boy gets stranded with girl, boy and girl are seduced by sex-crazed alien. Even so, Richard O’Brien’s groundbreaking 1973 rock musical and its 1975 film version have packed houses and set records since the start. (Though initially a flop, the film is thought to be the longest-running release in film history, since it’s been screened continuously since its premiere.)

Over the decades, weekly midnight showings of The Rocky Horror Picture Show (RHPS) have fostered a back-talking, prop-toting, costumed cult audience, and its saucy subject matter has provided a sexual awakening for many viewers (Princess Diana claimed the film had “quite completed my education”). Amidst all this hoopla and the film’s visual splendor, it’s easy to overlook the great soundtrack (conveniently on 8-track cartridge). Here are some things you may not know about Rocky’s rockin’ rockers. 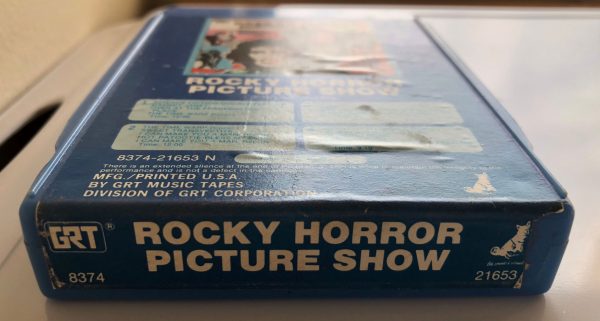 1. The music’s not the “time warp” it seems. The songs feature an “oldies” sound harking back to the ’50s and early ’60s, one already being glamorized in the 1971 musical Grease. In fact O’Brien was heavily influenced by Britain’s glam rock artists, many of whom embraced the ’50s sound. As an homage to rock’s roots, Gary Glitter’s 1972 “Rock And Roll, Part 1” may well have inspired RHPS’ nostalgic “Hot Patootie, Bless My Soul.”

2. The movie nearly starred rock’s most famous pair of lips. Mick Jagger expressed interest in playing mad scientist Frank N. Furter on film, and 20th Century Fox offered director Jim Sharman a much bigger budget if he’d populate the cast with famous rock stars like Jagger and Elvis Presley (who was also interested). Sharman declined, though he did ask O’Brien to write a part for an intrigued Marianne Faithfull (this time, O’Brien refused).

3. Eddie’s boots were hard to fill. Though O’Brien originally wanted the part of doomed rocker Eddie for himself, Sharman asked him to appear as handyman Riff Raff instead. Eddie’s “Hot Patootie” required a vocalist like O’Brien who could sing very high and very fast, and the part was difficult to cast until unknown Texas rocker Meat Loaf proved more than capable. 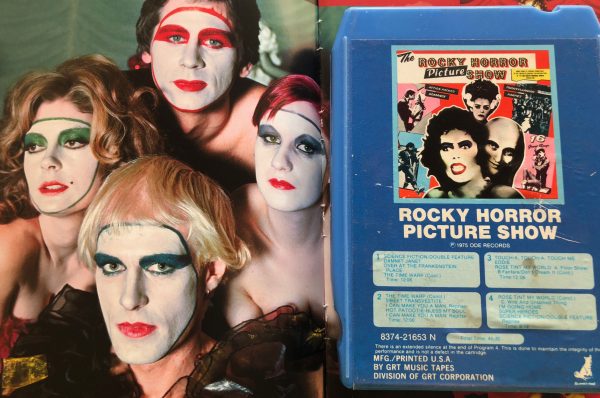 4. Frank’s not the only one bending genders. The main-title number places a man’s voice in a woman’s mouth: “Science Fiction/Double Feature” features O’Brien’s vocal as synced by the glossy lips of Patricia Quinn (who plays Magenta). In the stage play, Quinn sang this opening number as an usherette wandering the audience, but the title-sequence concept robbed her of her only vocal feature.

5. The “Double Feature” is more of a marathon. The song references ten classic horror/sci-fi films and one thirteen-part serial that, combined, would take 18 hours and 33 minutes to view. (One early titles concept was a montage of clips from all these films.)

6. Brad got screwed. (And not just by Frank.) Brad originally sang a solo verse in “Over At The Frankenstein Place” (“I can see the flag fly”) that was cut for the film, and his sentimental ballad “Once In A While” was filmed but also snipped out. At least actor Barry Bostwick won the part over an unknown Steve Martin, who had also auditioned.

7. A Queen voice inspired Frank’s vocals — and it wasn’t Freddie Mercury’s. Tim Curry’s highly affected dialect (he sings “brought down” as “broyt dine”) was modeled on the posh, proper accent of Queen Elizabeth II of the UK.

8. The “Time Warp” has a not-so-warped history. Riff Raff and Magenta claim this song is a folk dance from the moon-drenched shores of their native planet Transsexual. But according to Little Nell (Columbia), this Halloween party staple came about because she requested a song to feature her impressive tap-dancing skills. Sharman claims that “Time Warp” has political overtones, perhaps relevant to our upcoming midterm elections: will America take a jump to the left… or a step to the right?

9. You’ve heard the band before. The RHPS soundtrack is driven by the fine work of its unheralded rock combo. Leader John “Rabbit” Bundrick added some fantastic keyboard overdubs to Bob Marley and the Wailer’s Catch a Fire album, while drummer B.J. Wilson, at the time a full-time member of Procol Harum, had played on the hit live version of “Conquistador.”

10. The film music and the album are very different creatures. I’ve probably seen the film in theatres more times than I’ve played the album, so listening to the 8-track for this post was a real revelation. The mono film mix and stereo LP mix differ widely, with new instruments popping up on the album: cowbell on “Sweet Transvestite,” farfisa organ on “Touch-a Touch-A Touch Me.” Different vocal takes appear on “Eddie,” “Rose Tint My World,” and elsewhere. (Differences will be less notable to those who’ve seen the movie mostly on video, as the stereo versions have replaced the mono mixes on DVD/Blu-Ray releases.)

11. The one “Rocky Horror” song is missing. Manmade bodybuilder Rocky’s only vocal, the Elvis-like “Sword of Damocles,” isn’t included on the album, and in fact no stereo mix was ever made. This may be because the vocal is performed by a different singer (Trevor White subs for nonsinging male model Peter Hinwood) and perhaps elements were lost in the last-minute substitution.

12. The bonus song is one of the best things here. One great number was cut from the picture: the Criminologist’s closing narration (“and crawling on the planet’s face”) is just the tail end of a superb, creepy Brad and Janet duet called “Super Heroes,” sung as they crawl amidst the wreckage with Dr. Scott. The song evokes true horror: “Super heroes come to feast, to taste the flesh not yet deceased. And all I know is, still the beast is feeding.” This film sequence appears in the UK edit of the film, which is how it got onto the US soundtrack, a direct copy of the UK album. 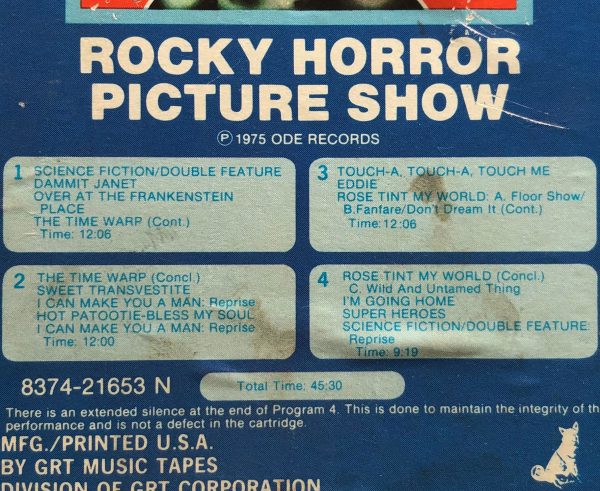 13. The 8-track is cool — but not perfect. Two versions of the Rocky Horror 8-track tape exist: the 1978 Ode/GRT tape shown here and an Ode/JEM release from the following year. Thankfully, both present the songs in film order, but both also split “The Time Warp” over a program break — a big buzz-kill in the middle of your Halloween party. It’s not shown on the listing, but the GRT tape breaks the Floor Show’s “Wild and Untamed Thing.” And as you can see by the timings, the final program ends with almost THREE MINUTES of silence. (The JEM tape shifts things around to eliminate this gap.) Still, these are very cool tapes to slide into the car player as you head to that midnight showing with your newspaper, squirtgun, toast, and confetti… 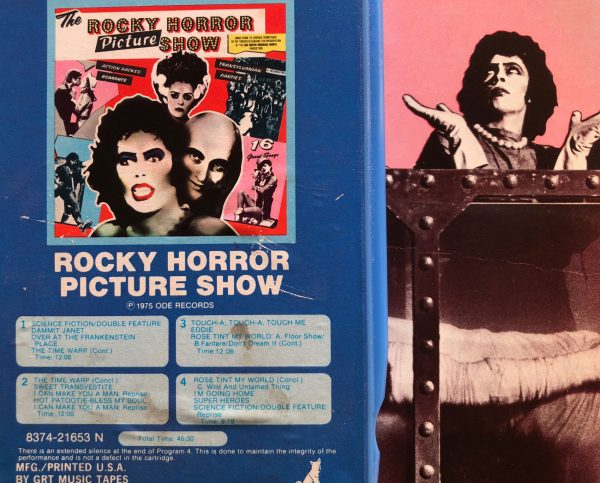