Happy New Year! To close out the hard-to-believe 2018, here’s a set of “fake grooves” from precisely 40 years earlier. 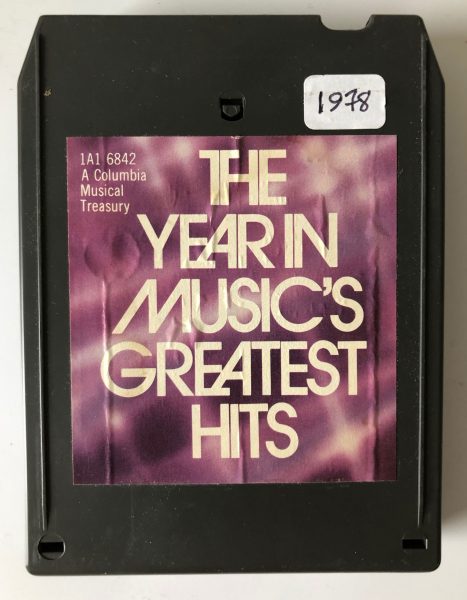 This time of the year, I’m always a sucker for “year in review” programs and articles to catch up on the trends and news stories I missed. Since there’s no 8-track to review 2018’s musical highlights, let’s jump back exactly forty years to this tidy ten-song rundown of the best of 1978 — not the original hits but very good cover versions by Columbia House studio group The Realistics. 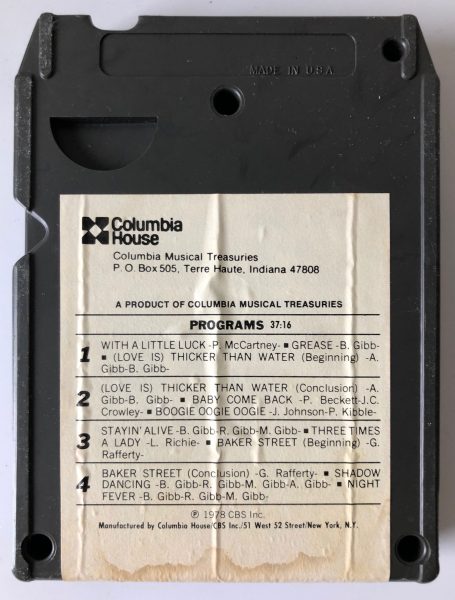 This tape (and its LP counterpart) were issued as companions to a fat, 320-page Columbia House book, The Year in Music, reviewing the pop trends, hits, tours, and sales records of 1978. (A followup book and album were issued in 1979.) The songs here really are 1978’s greatest hits; nine of the ten songs here reached Billboard #1 (“Baker Street” only hit #2). Let’s rewind to the happier, funner New Year’s Eve four decades ago and listen!

“Grease”: The Bee Gees were everywhere in 1978, mining their hits from Saturday Night Fever and crafting new gems for younger bro Andy Gibb. (Half the songs on this tape are Bee Gees-related.) Barry Gibb wrote this smash title song for the film version of the ’50s-themed musical Grease. The Realistics turn in an admirable remake; the singer doesn’t quite match Valli’s nasal style but he’s pretty close. Heard at a party, you could mistake this for the real thing.

THE REALISTICS: ‘Boogie Oogie Oogie’ (A Taste Of Honey Cover, 1978)

“Boogie Oogie Oogie”: Of course, disco was huge in 1978 too; one of the biggest hits was this dancefloor anthem by Los Angeles’ A Taste of Honey. Performing the tape’s only female vocal is a talented studio singer, likely doubling herself on backing vocals. This remake is very close to the original, convincingly mirroring its handclaps, clavinet keyboards, and sizzling fuzz-guitar solo.

“With A Little Luck”: Even with the disco invasion, rock was still very big in 1978, with new wave hits by Blondie and The Cars, heavy-metal successes from Foreigner and Van Halen, and great returns to form for the Who and the Rolling Stones. The closest this Columbia House tape gets to rock, though, is a cover of the gentle “With A Little Luck” by Wings, whose lead singer had rocked the ’60s in The Beatles. Admittedly the single was straight-up pop music, and The Realistics sound more like a very good bar band than they do Paul’s high-flying combo.

“Baker Street”: Featuring pop’s best sax riff until Wham’s “Careless Whisper,” this Gerry Rafferty number offers the mysterious, late-night atmosphere heard in so many late-’70s yacht-rock radio hits. It’s a good cover: the Realistics’ vocal is convincing, the synth work admirable, and the sax player nails that signature riff. (8-track-curious listeners should note the fade down and up at 2:16 to accommodate the program break — I chopped out the silence — and the glitch at 3:17, probably a capstan burn on my 8-track cart.) 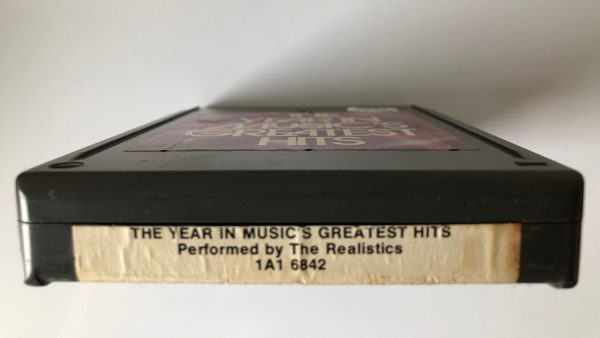