There was a weird resurgence of Beatlemania in the late 1970s, several years after the band had broken up. It started in early 1976 as offers for the legendary band to play a live reunion grew from $10 million to $30 and then $50 million. Oddly, the offer that almost worked was a mere $3000 offered by Lorne Michaels as a joke on Saturday Night Live that spring (“If you want to give Ringo less, that’s up to you”). Paul was visiting John uptown at the Dakota that night and together they watched Lorne’s pitch. Says Lennon, “We nearly got into a cab, but we were actually too tired…” 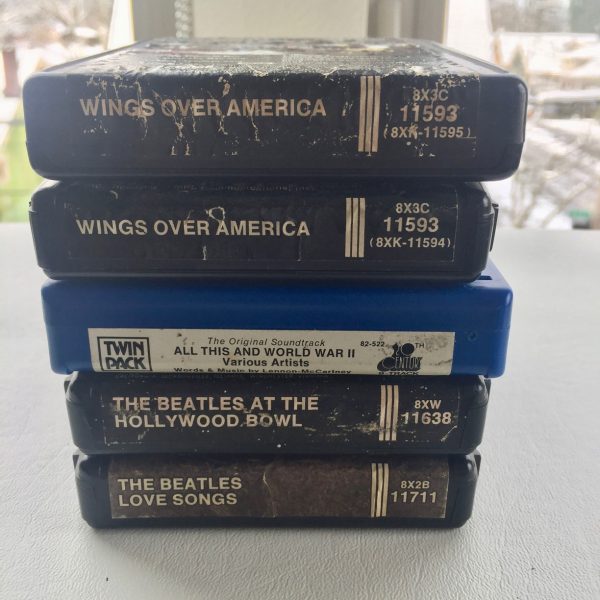 As summer 1976 rolled around, the band’s Apple contract with Capitol/EMI expired, allowing the labels to assemble new compilations and issue tracks in whatever form they wished. First out of the gate was the obvious and pointless collection Rock ‘n’ Roll Music, complete with bizarre ’50s Happy Days-inspired cover art.

I remember hearing “Got To Get You Into My Life,” the single from the album, in the car with friends en route to see Paul’s band Wings play at San Francisco’s Cow Palace that June. This tour was the first time any Beatle had played the US since their final live show in that city almost a decade earlier; the concert featured Paul playing no fewer than five Beatles classics, which he’d never done before. Quite a thrill! (The shows were summarized on Wings Over America, a three-LP set conveniently poured into a double 8-track. Since audience noise makes it hard to juggle songs, the tape version simply breaks a lot of numbers in half. But it’s still a ton of great Paul music.) 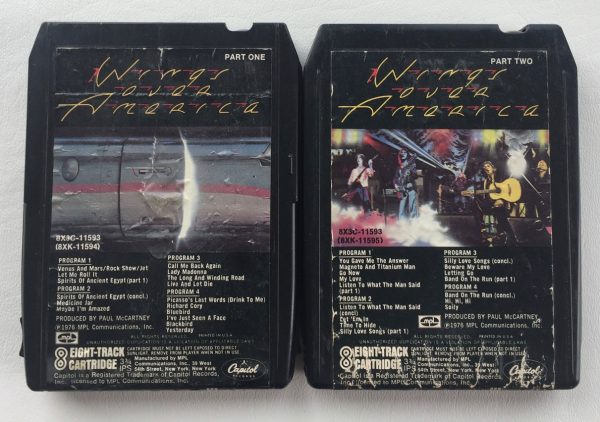 The madness grew that fall as a mystery group named Klaatu was rumored to be a secret Beatles reunion (it wasn’t). An even weirder project emerged by the end of 1976, the film All This and World War II. This was an assemblage of Second World War newsreel and archival clips, inexplicably underscored with Beatles songs as played by current rock artists. Unsurprisingly, the film was a critical and commercial disaster, never shown on TV or released on home video. 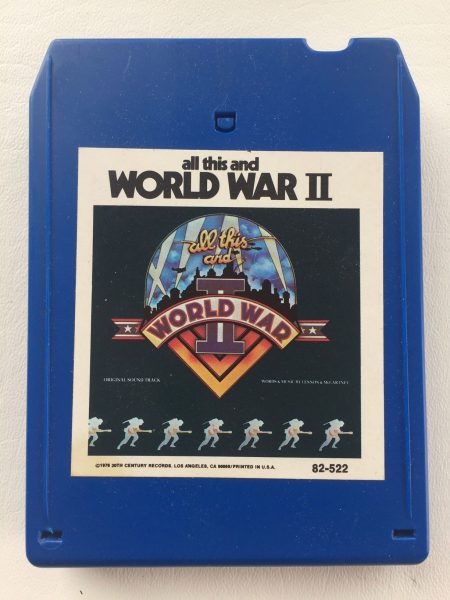 The ATAWWII album fares a little better; there’s a handful of great, rockin’ covers by the likes of Ambrosia, Elton John, Rod Stewart, and Tina Turner, many of which became (or had been) hits. But most of the album finds random vocalists overemoting with orchestral backup, like some sleep-inducing charity event at a concert hall. The 8-track squeezes these uneven 98 minutes onto a single tape, which given its useful length (few blanks are over 90 minutes) you may wish to record over… 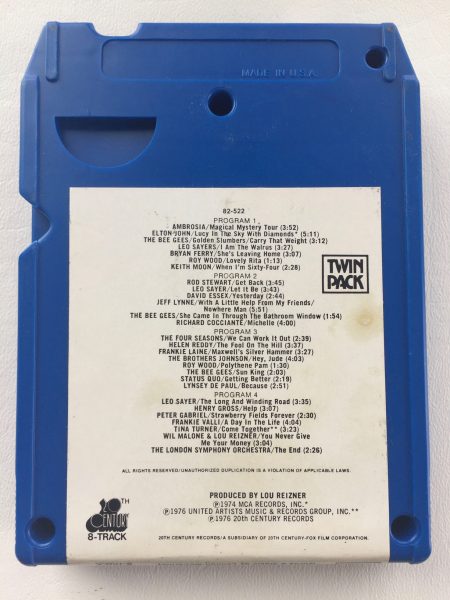 By early 1977, bad cover versions and reunion hopes weren’t enough; the world wanted to see Beatles, even fake Beatles, play live, and Broadway delivered. Though the musical Beatlemania simply presented Fab Four songs played onstage with no dramatic narrative, that was enough; it earned $40 million over its two-year run. Also in April, an almost-legal release of a crude audience recording of a 1962 Hamburg Beatles performance emerged; it proved fascinating if nearly unlistenable (and yes, there’s an 8-track of it). 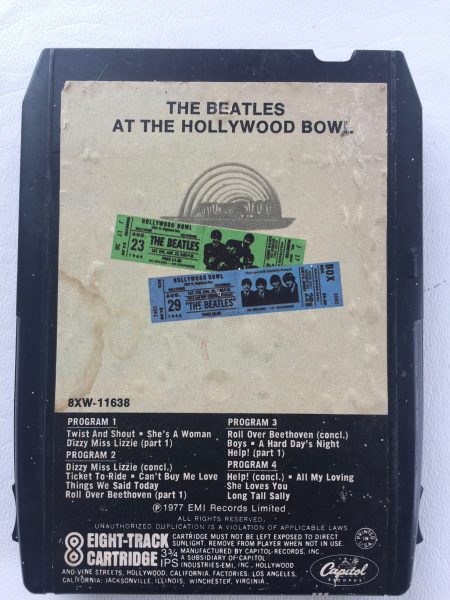 Capitol/EMI countered with their own live Beatles release, compiled from 1964 and 1965 shows at the Hollywood Bowl. Thrilling as it was to hear the first “new” Beatles recordings in years, this wasn’t the band’s finest hour (Lennon screws up the verses in “Help”), partly because they couldn’t hear themselves play over the screaming fans. Like the Hamburg tapes, this is more interesting as a historic document than an actual music album. (As with Wings Over America, the 8-track just lets the live tapes roll and breaks songs as necessary.) (Article continues after song…) 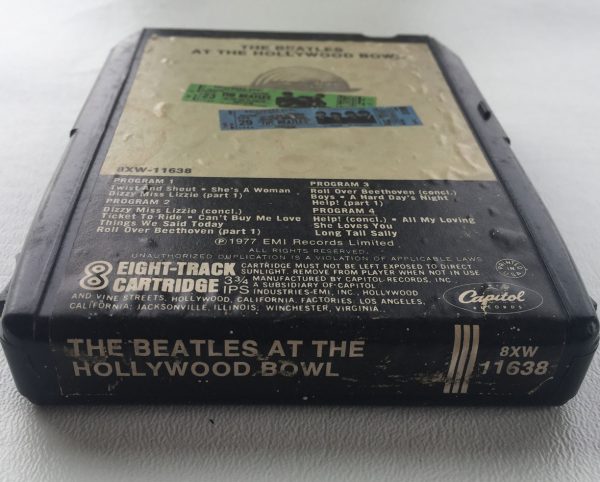 The Beatles At The Hollywood Bowl: ‘If I Fell’ (Live)

October 1977 saw the release of two of my favorite late-Beatlemania releases: a Beatles tribute issue from raunchy mag National Lampoon and Capitol/EMI’s sublime followup to Rock ‘n’ Roll Music. Love Songs could have been a boring dud, but the label wisely mined the band’s rich 1964-1965 period, pulling out gentler B-sides and album tracks originally overshadowed by the hit singles and raucous rockers. Love Songs reminds us what skilled songwriters John, Paul, and George were, even as they cranked out songs to fill up LPs. It’s a great late-night or early-morning listen; the 8-track presents all four LP sides in one flow as you sip coffee or what have you. (As with Rock ‘n’ Roll Music, Love Songs was never officially issued on CD, so the cartridge is actually a good option.) 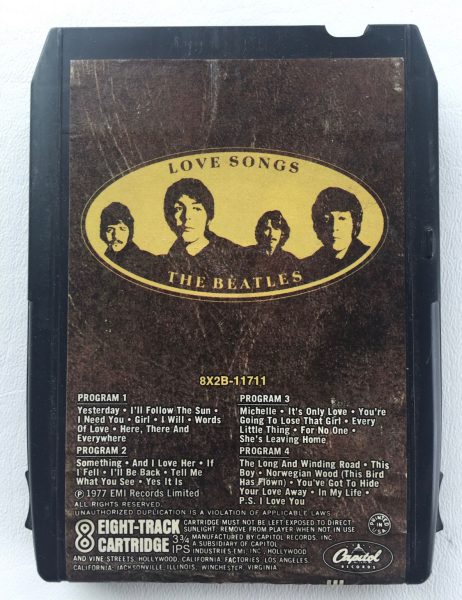 Other than a rarities disc in an original-LPs box set at year’s end, 1978 saw no new Beatles music releases, but it did see the band’s mythology translated into film. In spring two wonderful comedies emerged, the Beatlemania fantasy I Wanna Hold Your Hand and the cheeky TV mockumentary The Rutles: All You Need Is Cash. Alas, summer’s release was the terrible and nonsensical Sgt. Pepper’s Lonely Hearts Club Band, with Peter Frampton and the Bee Gees standing in for the Fab Four. Apart from a couple great Beatles covers by Aerosmith and Earth, Wind & Fire, the dud project was a naked cash grab, souring public taste for the Fabs and effectively killing the second Beatlemania boom. For a second time, to paraphrase Lennon, the dream was over. 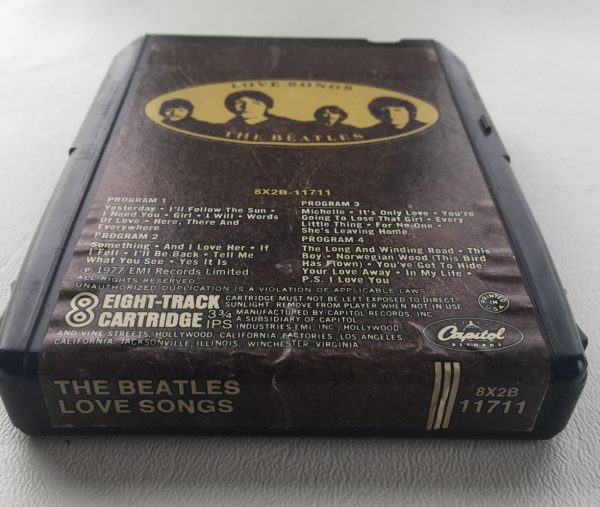