Visiting friends in Denver last fall, I set out to find some 8-tracks and actually succeeded. In a corner of the damp and smelly basement of a store called Angelo’s, I found tons of mostly terrible 8-tracks. Inside a nearby cardboard box, though, I found better tapes no one else had looked through, including this Talking Heads tape, which I knew was worth a few bucks. But how much would they charge me since it wasn’t priced? I went upstairs nervously with six tapes. The cashier asked me for six bucks plus tax—then hesitated, looking through the stack once more. Here we go, I thought. “These are buy five, get one free, so it’s only five bucks plus tax,” he said. Works for me! 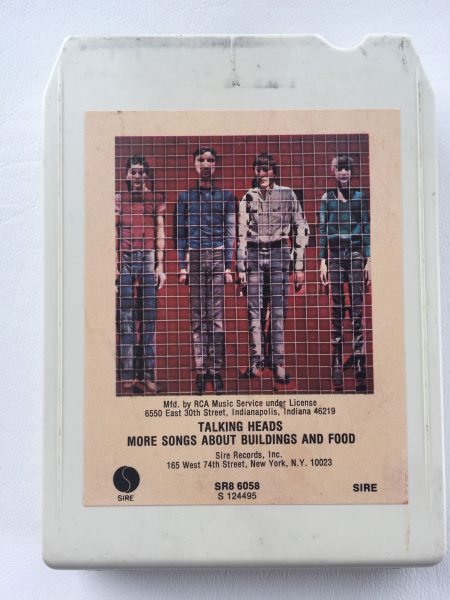 Only afterwards did I realize this wasn’t the official Warner Bros/Sire release of the album but a copy issued by the mail-order RCA Record Club. Most “club carts” keep the same song running order as the label’s own 8-track versions, but this one doesn’t; it also interrupts two songs with program changes (the original tape has no such breaks). Upon listening, this is actually a better version because it better preserves the storyline of the original vinyl LP. 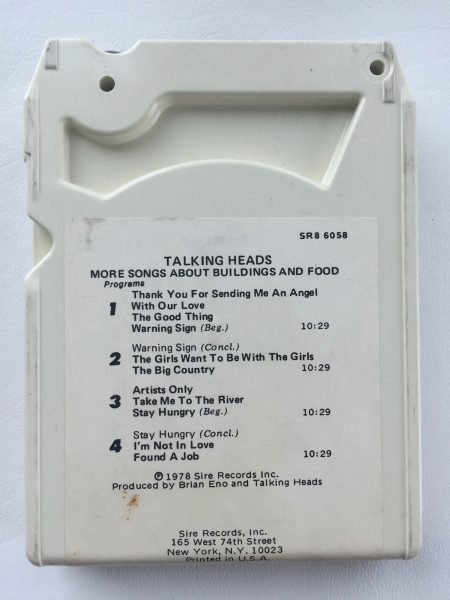 To me the album’s lyrics suggest a narrative thread, a story of romance, heartbreak, and art-making. This could be the tale of a Midwestern couple meeting at a cowboy bar (“Thank You For Sending Me An Angel”), falling in love (“With Our Love,” “The Good Thing”), and experiencing the usual fights and separations (“Warning Sign,” “The Girls Want To Be With The Girls”). Unexpectedly, the duo finds peace in making art together (“Found A Job”) and moves to the big city. They remain a couple but drift apart (“Artists Only,” “I’m Not In Love”) and fall prey to the decadence of the art scene (“Stay Hungry,” “Take Me To The River”). Flying from one coast to another, the jaded pair looks with distaste at the common folk below (“The Big Country”). Yet even as the artsy snobs soar overhead, another Midwestern couple is meeting at another cowboy bar below to start the cycle all over again. (Even if you don’t buy my storyline — and you really shouldn’t — the album’s mood still progresses from optimistic to cynical.) 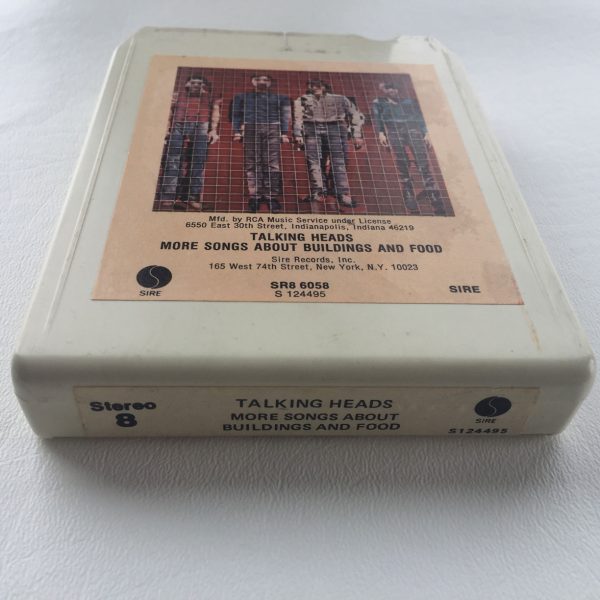 The Warner/Sire tape maintains most of the LP sequence but throws some later disillusionment songs into the early idealism, really wrecking the flow imho. The RCA cartridge preserves the LP narrative a little better, maintaining the order of the first five songs, then jumping ahead to the “Big Country” plane ride. The RCA version’s back end is jumbled a bit, but it ends on “Found A Job,” kind of a cool message to leave the listening audience with: if you don’t like our art, make your own. I also like that this very hip album (the first of the Heads’ three collaborations with producer Brian Eno) was made available via mail order to folks in unhip small towns, so smitten young couples could rock out to the artsy 8-track while heading home from the cowboy bar…