‘SON OF DRACULA’ (FILM AND HARRY NILSSON SOUNDTRACK, BOTH 1974) 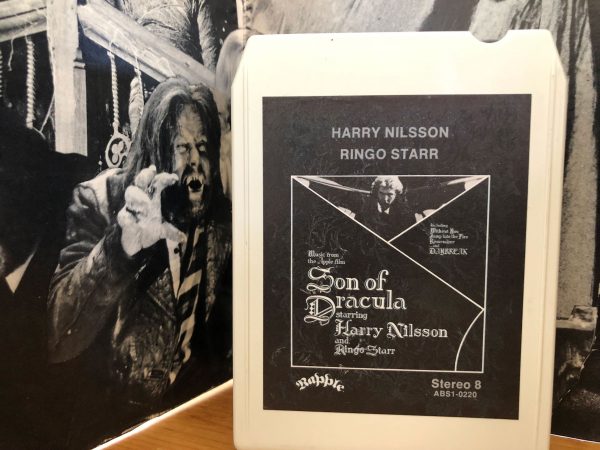 Even before Harry Nilsson played a bloodsucker onscreen, he was already a vampire. As a member of Alice Cooper’s ’70s Hollywood drinking club The Hollywood Vampires, Harry joined famous pals Mickey Dolenz and Keith Moon in drinking not “the blood of the vein [but] the blood of the vine,” as Cooper put it. Another Vampire was Ringo Starr, who took the group name literally and dreamed up a movie about a kindhearted rocker who’s also a reluctant neck-biter. And who better to play this gentle, deathless soul than angel-faced Nilsson?

The film: Nilsson plays Count Downe, Dracula’s century-old heir. Downe is summoned to London by immortal wizard Merlin (Starr) to claim his birthright as the new King of the Netherworld. But the sultry Amber (Suzanna Leigh) stirs human feelings in Downe, who decides to become a love-enabled mortal and relinquish his throne. Meanwhile, Dr. Van Helsing and Baron Frankenstein are each desperate to control Downe’s destiny — for their own nefarious reasons…

Because its cast and director are largely Hammer veterans, Son of Dracula looks and feels like a quality Hammer horror film of the period. Though marketed as a comedy, there are no intentional laughs; this isn’t a freewheeling monster spoof but an earnest attempt at a Gothic vampire flick, with grandiose dialogue to match: “now the netherworld can rejoice that a vampire child will be born in the manner of the human world.” 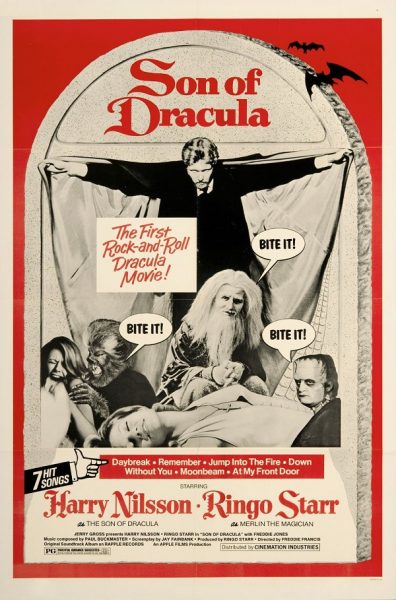 Dramatically, the weak link is Nilsson himself; in his dialogue scenes he’s stiff, soft-spoken, and uncomfortable. Yet in the four songs he plays live — his character Downe was an avid music student — Nilsson displays all the passion and intensity he can’t muster for his spoken parts. Adding to the excitement is Downe’s all-star live band, which includes Keith Moon, John Bonham, and a pre-stardom Peter Frampton.

Though Son of Dracula is seldom spooky, funny, or thrilling, it’s always watchable and frequently rockin’; manage your expectations and you may even enjoy it. The film was never released on home video or cable but a VHS bootleg has made it to YouTube, so you can finally view this lost rarity. 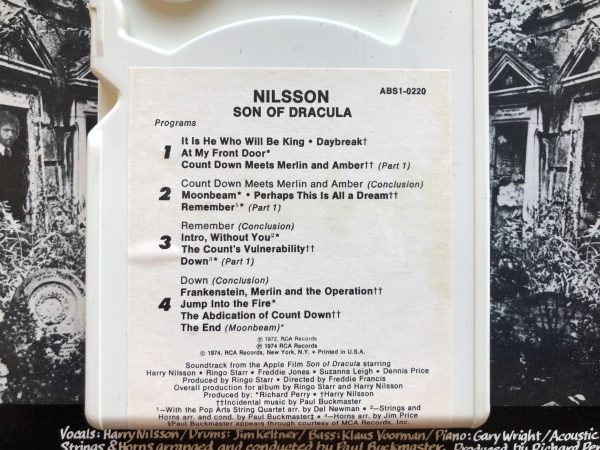 The album: Like dime-store Halloween records of “scary sound effects and spooky songs,” the bizarre Son of Dracula album is basically “Nilsson’s greatest hits with creepy dialogue and music”; fully a third of the running time is spoken bits from the film. These are overlaid with trippy, jazzy incidental music (sounding like Zappa or Miles) and sound effects both shivery (thunder and rain!) and silly (a ping-pong game?).

In between, you get seven great Nilsson songs, all but one from his two previous albums. Three had been hit singles, with Badfinger cover “Without You” reaching #1. 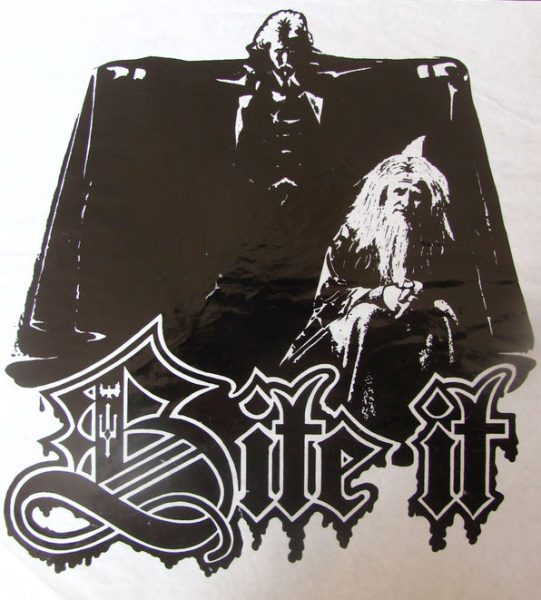 The songs are resequenced from the film; with the three ballads together halfway through, the album drags a bit midway. But it’s nice to wind things up with the mighty “Jump Into The Fire,” appearing here in its single edit.

My Nilsson fanatic friend Todd Lawrence finds the film “half fun and half awful,” adding, “I look at it as two best friends living out a dream together. It is the single most extensive collaboration between Harry and Ringo. For them, I think it was about having an excuse to ‘play’ together.” No argument there, and Harry got to play with lots of other Hollywood Vampire buddies as well. He even wrote an anthem for the group in “Daybreak,” the one new song here and a Top 40 hit. The reggae-tinged lament applies equally to booze-drinkers and blood-sippers: “Had a good time last night, best I ever had / Here come the sunshine that’s makin’ me sad.”

The 8-track: The nicest thing I can say about this tape is that I’m glad it exists. The 8-track edition deprives the buyer of the very cool bat-cape foldout gatefold jacket and rare “Bite It” T-shirt transfer issued with the LP. The tape programming is the worst I’ve heard; because everything’s crossfaded and overlapped, resequencing the album was impossible. So RCA gave up, splitting the master tape into equal fourths and chopping off songs at random with no fades.

However, buyers of the sealed 8-track have their own treat: the evaporated label glue has crystallized into a lovely filigree pattern, a perfect adornment for this esoteric, Gothic-flavored curio. 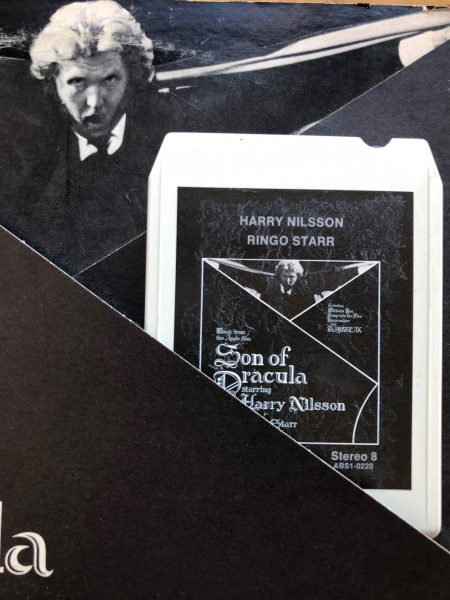