For Part Four of our Beatles series, some 8-tracks that reunited the Fab Four…on tape, anyway!

So these are Beatles tapes? Not exactly. These are collections of songs recorded by ex-Beatles during their early solo careers. (The two Lennon, McCartney, and Harrison tapes have the same music.)

They’re bootlegs? So these have rare outtakes? No, these are all the familiar studio recordings. “Bootleg” is 8-track shorthand for a pirated (unofficial) tape.

Do these cover a bunch of solo albums? Really just three: George Harrison’s All Things Must Pass (November 1970), Paul and Linda McCartney’s Ram (May 1971), and John Lennon’s Imagine (September 1971). The John, Paul, George, and Ringo ’71 tape adds 1970 tracks from John, Paul, and Ringo. 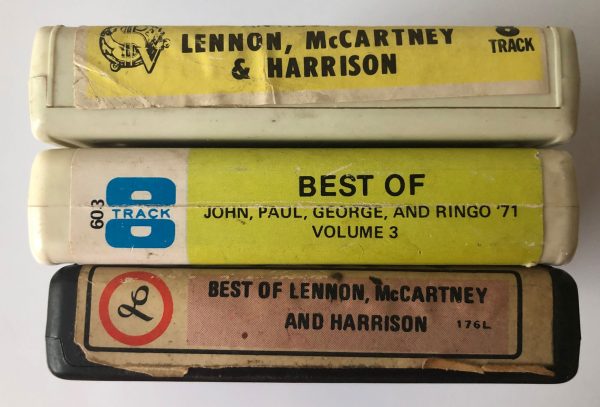 When were these made? Both tapes appear to be from fall 1971, after Imagine but before Paul’s Wings – Wild Life and George’s Concert for Bangla Desh were issued for Christmas 1971.

Why did they make these? The pain of the Beatles’ April 1970 breakup was still fresh in people’s minds, so hearing these collected solo tracks was a comforting way to hear the band “reunited.” John Lennon himself suggested the practice: “If people need the Beatles so much, all they have to do is to buy each album and… put [songs from each] on tape, track by track.” (Even now, fans enjoy creating their own post-breakup “Beatles” albums.)

And this was legal? Not exactly. These so-called “truck stop” tapes were in a legal grey area at this point, as bootleggers were supposedly paying some royalties but not actually getting permission to use the material. 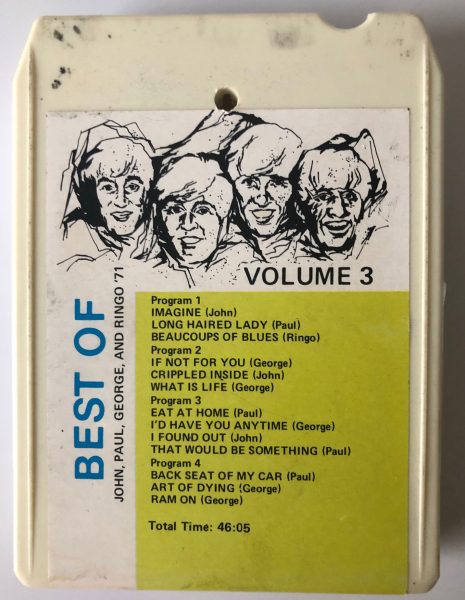 Was this just an 8-track thing? Pretty much, if only because it was easier to reproduce them surreptitiously (at home, if necessary). A couple shady vinyl collections from Asia can be found here and here.

Why didn’t Capitol do this officially? Good question, since all four ex-Beatles were still on Apple/Capitol. I think the label wanted to develop the members’ solo careers rather than making them just nostalgia spinoff acts. (The first official John, Paul, George, and Ringo collection wouldn’t appear until 2014, as a four-song iTunes download.)

Do these sound like Beatles albums? To my ears, not particularly; the production styles are quite different across the three albums. Though Ringo plays on George’s album and George plays on John’s, this still doesn’t sound like the work of a single band. In particular Paul’s playful, romantic songs sound really odd in context, lacking the familiar Beatles grit. (Hilariously, the Hour With tape follows “How Do You Sleep,” John’s cruel critique of Paul’s silly pop songs, with Paul’s silly pop song “Ram On.”)

Why does only one tape use Ringo’s songs? Having written only two Beatles numbers, Ringo wasn’t really seen as being a singer-songwriter the way the other three were. Though Ringo had two albums under his belt at this point, he hadn’t really had any hits — other than the smash “It Don’t Come Easy,” inexplicably omitted from both tapes here.

What other stuff didn’t they use? Beyond the Ringo snub, the tapes largely ignore the fine McCartney and John Lennon – Plastic Ono Band. George’s hit singles are well-represented here, but Paul’s “Another Day” and John’s “Give Peace a Chance,” “Cold Turkey,” “Instant Karma!,” “Power to the People” were passed over. However, the prevalence of album tracks does help these gel better as albums in themselves.

How do the tapes sound? Like so many 8-track boots, these vinyl-sourced collections sound superb, crisp, and bright, as good as their legal equivalents. (Best of Lennon, McCartney, and Harrison is probably a straight dupe of the Hour With set, resulting in muddier sound.) The John, Paul, George and Ringo tape has some flubs on the label: the McCartney track “That Would Be Something” is actually the “Valentine Day” instrumental from the same album, and his song “Ram On” is credited to George!

Now what? If you’ve read this far, you must be interested in the Beatles. So go ahead, create your own “what if the Beatles never broke up” compilations on Spotify, iTunes, cassette or even 8-track! Include all the solo hits or just your favorite “deep tracks.” Sequence it like George Martin would have — or do it your own way. There’s no wrong answer here, so have fun and enjoy your impromptu Beatles reunion! 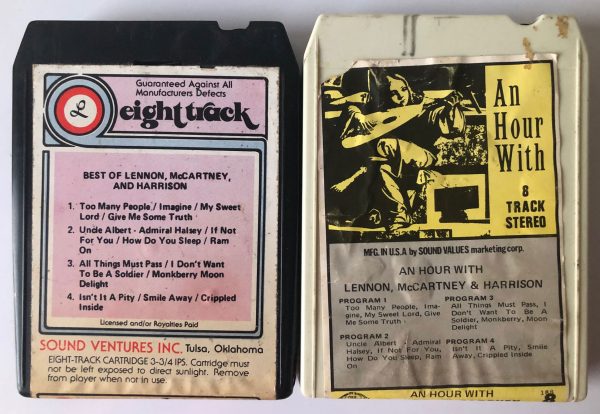 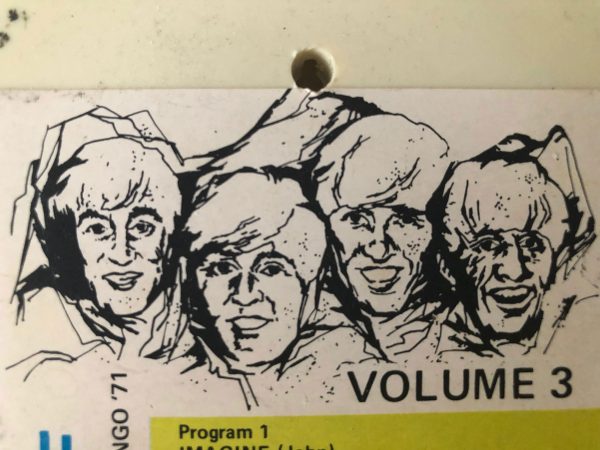