ROLLING YOUR OWN
(Note: this article discusses making copies of copyrighted music; please see notes at end of article regarding legality.)

Like cassettes and CDs (and unlike vinyl), you can record your own 8-track tapes. But unlike those other media, the 8-track cartridge is its own unified entity, package and playback medium all in one, so the end product feels more like a piece of art somehow. Plus it’s so obscure; few people can even play these tapes anymore, so the ability to actually record them seems almost magically esoteric. Slap a well-designed label on there and you’ve got a bizarre artifact flown in from a parallel universe. 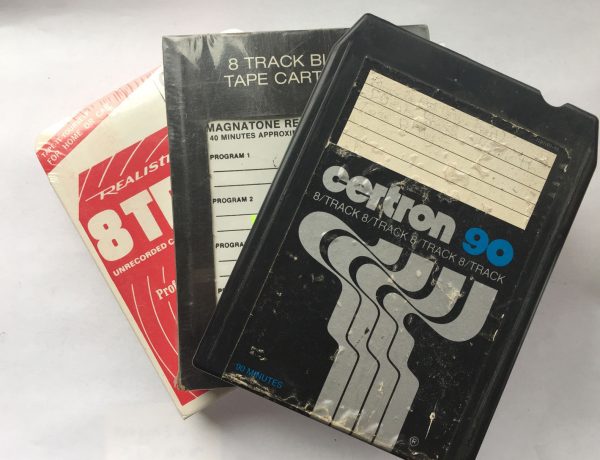 Recordable blank tapes. Hunt around on eBay and you can find them for less than $5 each including shipping.

My process is pretty simple: load up the laptop with files ripped from my CD, shuffle the tracks into four equal playlists that fit the tape length, and record them onto 8-track programs one by one. (Some 8-trackers don’t bother with the second step and record the whole album in one pass. This means recording songs straight through the track shifts and splices, resulting in split-second gaps in the sound. This strikes me as careless; it loses the nostalgia factor and the elegance of four equal programs broken up by brief silences and “ka-chunk”s.)

There are three goals in making a perfect 8-track; you can pick any two:

If you need to split a song to make it work, open the file in an audio-editing program, cut it in two halves, then add a fade-in and fade-out on either side of your edit.

Where do you get the blank tapes from? New, sealed blanks are plentiful but expensive ($5-10 each) on eBay. The cheaper route is to buy batches of used blanks or prerecorded tapes you have no interest in (country and easy-listening titles tend to be plentiful and cheap), then wipe and record over them. Due to alignment variance in play/record heads between machines, though, this can result in the old music still being audible after you record on top of it. So buy a hand-held electromagnetic tape eraser ($20 or so) and wipe the audio clean before you go to work.

Handheld bulk eraser. Removes all existing audio from a tape in just seconds. Don’t use it near good tapes, credit cards, hard drives, or personal electronics, though!

Whether using blanks or old album tapes, I recommend timing each tape’s program length from “click” to “click” using a stopwatch. Make your playlists about 5-7 seconds shorter than the program length to allow for unpausing of the tape and starting the music.

Unlike cassettes, there’s no erase-protect tab to remove or restore when you record on 8-tracks; just plug in any tape and dub away. Thankfully, record decks typically have a complex interlock that makes it hard to press “record” accidentally and ruin your prized Dead Boys tape. 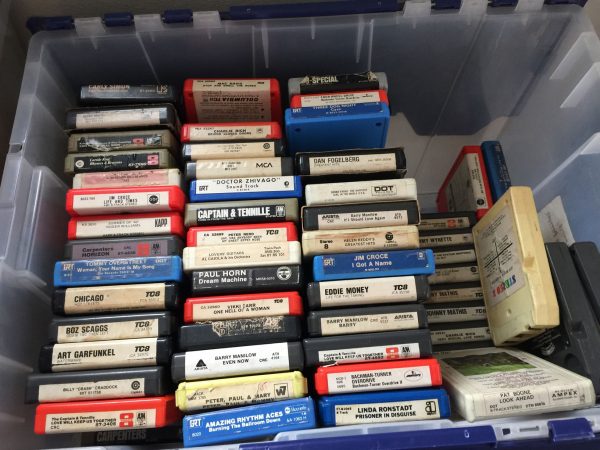 My “record over” box. Nothing wrong with this music, just stuff I won’t listen to and can’t really resell. (Some are duplicates of tapes I already own.) I have a list with all these tapes and the program times of each, so I can easily grab one to make a new tape.

What to record on your own custom carts? Well, any album made since the format declined 35 years ago is fair game; albums from the ’90s to the present are especially fun, though these CD-filling releases tend to require longer blanks. But I’d recommend starting with hip hop, which was on the rise just as 8-tracks were on the way out. Only a few hip hop 8-tracks exist that I know of, early stuff like Sugarhill Gang and Kurtis Blow. So please, get some rap up in those carts and make some history.

Legal issues: On its website, the RIAA, which protects music copyrights in the USA, makes no mention of making 8-track tapes off your CDs (unsurprisingly). However, the site indicates that “burning a copy of CD onto a CD-R… won’t usually raise concerns so long as the copy is made from an authorized original CD that you legitimately own, (and) the copy is just for your personal use.” So rip, dub, and click away, but no handing out cool custom 8-tracks to your friends—make them roll their own!

You can read last week’s installment here: Funkadelic, ‘One Nation Under A Groove’ (1978)