Protip: If you ever get up at 6am to greet the dawn while writing a blog post, start your morning with Ramsey Lewis’ glorious (if ungrammatical) “Les Fleur.” Lewis’ tinkling piano enters as if excited for the day’s possibility, and the big chorus comes on as bold as the sun blazing over the horizon. Years ago my Chicago-born friend Mark Kadlec turned me onto this song, having used it in a student film, and he’s far from its only fan. Ramsey’s dreamy, dramatic cut was quickly covered by Minnie Riperton and a few decades later by British electronica ensemble 4 Hero; Ramsey’s original was sampled by beloved hip hop duo Gang Starr. 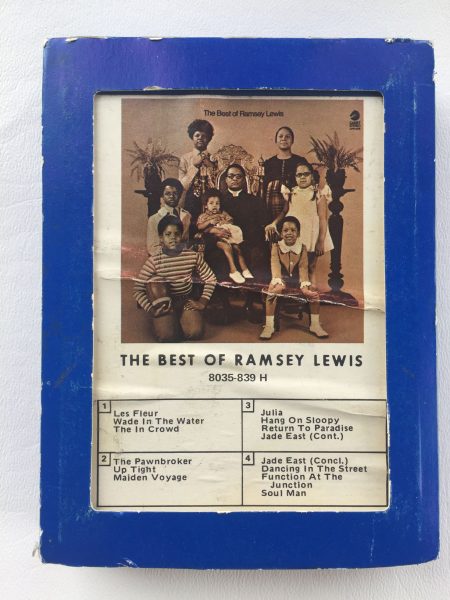 About half of this fine 1970 8-track (and LP) are gentle, atmospheric pop instrumentals like “Les Fleur,” many written, arranged, and/or produced by Chicago legend Charles Stepney. (Stepney formed the acid-soul combo Rotary Connection and produced The Dells and The Soulful Strings as well as Marlena Shaw’s stunning “California Soul.”) Other highlights in this cinematic style are Ramsey’s take on Herbie Hancock’s “Maiden Voyage,” his funky version of the Beatles’ “Julia,” and his trippy “Jade East.” (The latter, which spans a program break on the 8-track, is written and produced by another Chicago genius, Richard Evans.) (Article continues after song…)

The rest of the songs here are earlier, bigger hits in Ramsey’s “soul party” style. In the mid-60s, the Chicago soul-jazz pianist struck upon a winning formula: pick a current hit song, play it as a fast, lively instrumental with his talented drummer and bass player, record it live with crowd cheers and handclaps, and chalk up another chart record. This started with the surprise hit version of “The In Crowd” and carried through festive, rockin’ takes on “Hang On Sloopy,” “Wade in the Water,” and “Dancing in the Street,” mostly credited to the Ramsey Lewis Trio. (Lewis’ soul-party style actually gave birth to a related act; his drum and bass player from “The In Crowd” split off to form their own combo with a new pianist. Young-Holt Trio, later Young-Holt Unlimited, would have Ramsey-ish hits with “Wack Wack” and “Soulful Strut.”)

To my mind Lewis is greatly underrated, probably because he makes it look too easy. Lewis’ performances seem so joyous and effortless that they hardly sound like work, and we seem to revere the artists that suffer greatly and die young. The apparently un-tortured Lewis kept releasing music for decades after this fine 8-track, including a smash hit album in 1974. The LP Sun Goddess was a collaboration between Lewis, Charles Stepney, and Lewis’ 60s drummer, a guy named Maurice White who had just founded a little group called Earth, Wind & Fire.

I’m happy to report that at this writing Lewis is alive at 82; Wikipedia assures us that he “still lives in Chicago, the city of his musical roots, with “seven children, fourteen grandchildren, and one great-grandchild.” His immediate offspring are apparently shown on the cover of this sweet-sounding 8-track, which nicely interpolates the mood pieces and party jams. So let’s toast family-man Ramsey by pouring some coffee, putting on “Les Fleur,” and grooving to some effortless genius.