Here are a pair of folk-rock trivia questions you can use as bar bets. First, what year did Simon and Garfunkel first break up? Second, when did Paul Simon’s first solo album come out? Most rock fans (or at least ones you’ll meet in a bar) will flash back to the early ’70s for their answers. Of course everyone knows they called it quits in 1970 after releasing their masterpiece album Bridge Over Troubled Water (featuring “The Boxer” and “El Condor Pasa”). And in 1972, while Art worked on his acting career, Paul put out his beloved self-titled LP (“Mother and Child Reunion,” “Me And Julio Down By The Schoolyard”). Both were landmarks but neither were firsts, so enjoy your free beverages courtesy of 8-Trackin’. You’re welcome! 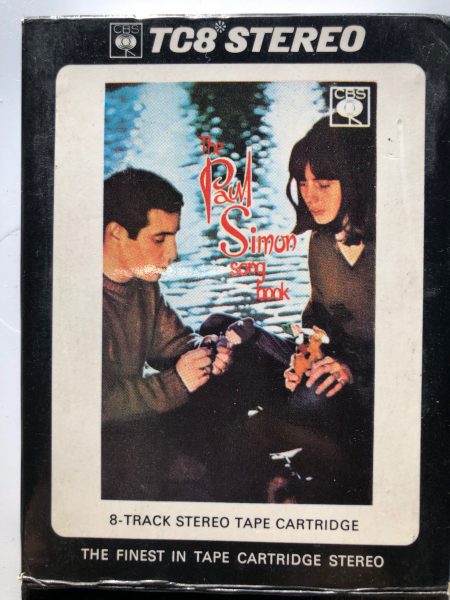 Trivia answer #1: The beloved, voice-of-a-generation folk duo actually called it quits for the first time in 1964. After Wednesday Morning, 3 AM, the duo’s earnest attempt at an acoustic folk album, had failed miserably, Paul split from Artie and took off to live in England, perhaps drawn by the allure of Beatlemania. There he formed a relationship with Kathy Chitty, a teenage ticket-seller at a folk club he played. (That’s Kathy with Paul on the tape box.) They visited the US and toured the countryside by bus as described in Paul’s song “America”; Kathy’s departure for England (“where my heart lies”) resulted in “Kathy’s Song.” Paul’s residency in England inspired great songs and provided eager crowds for his bar and club gigs.

Trivia answer #2: To satisfy this UK audience, Paul put together his first solo album in 1965. He was still under contract to Columbia after Wednesday Morning, 3 AM, so he decided to cut a live-in-the-studio run-through of his club set, initially released only in England. The resulting recordings, captured with one mic and therefore in mono, feature only Simon’s voice and guitar (and on one track, his emphatic foot-stomping). The performances are pristine, with Simon singing and playing beautifully; the absence of studio overdubs or even Garfunkel’s harmonies let you focus on Simon’s songwriting craft, at that point astounding. 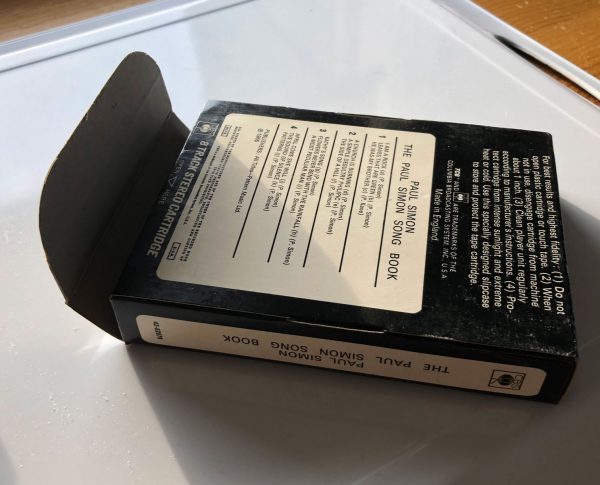 Unlike the S&G debut, which was largely folk covers, all twelve songs here were written by Simon, and all but two (“The Sound of Silence” and “He Was My Brother”*) were new to fans who hadn’t seen his shows. The arrangements are pretty similar to the versions Simon would later record with Garfunkel; the spooky, urban “Patterns” even features the string-bending guitar intro heard on the later LP. The Dylan pastiche “A Simple Desultory Philippic” is even funnier than the remake; it’s a frantic, spirited take with a lyric later deleted: “When in London do as I do / Find yourself a friendly haiku / Go to sleep for 10 or 15 years.” He’s clearly not sleeping through this set, though.

Paul Simon: ‘A Simple Desultory Philippic (Or How I Was Robert McNamara’d Into Submission)’ (1965)

Of particular interest to Simon & Garfunkel fans are two songs never recorded by the duo or elsewhere by Paul; both are topical protest songs, which is perhaps why Simon didn’t return to them. “The Side of a Hill” describes a child’s death in wartime and features lyrics reworked for “Scarborough Fair / Canticle”: “generals order their men to kill, and to fight for a cause they’ve long ago forgotten.” “A Church Is Burning” describes an attack on a black house of worship, a sadly frequent event in those days. The imagery here is powerful: “The flames raise higher / Like hands that are praying, the fire is saying / you can burn down my churches but I shall be free.”

Does Paul Simon hate this album? He’s given it a very limited release over the years, which is why you’ve probably never heard of it. Though available in England until 1979, it appeared only briefly in the US in 1969, then resurfaced in a Simon & Garfunkel box set in 1981, finally arriving on CD in 2004. In “Kathy’s Song,” he scorns his own lyrics (“words that tear and strain to rhyme”) and continues the self-criticism in the harsh album notes: “There are some (songs) here that I would not write today. I don’t believe in them as I once did… It’s just not me anymore.” (He even hates his own liner notes: “One thing I know, I won’t reread them.”) 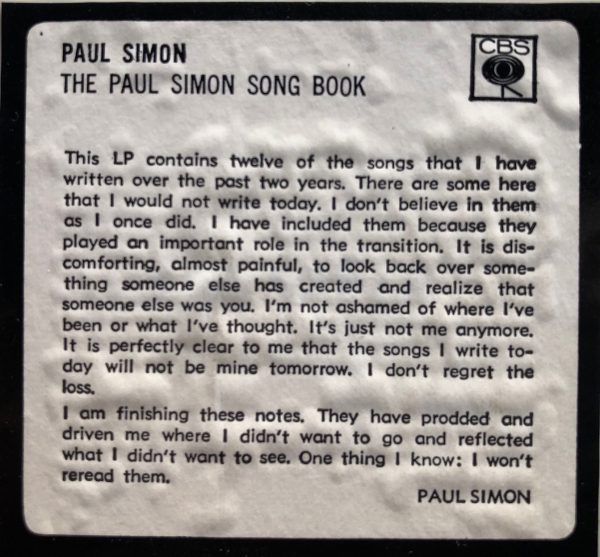 Obviously he regained his faith in this material, as he reused most of it on his next few albums with Garfunkel. Their reunion was unexpected. Thinking he could make a hit out of “The Sound of Silence,” Columbia producer Tom Wilson had taken the duo’s Wednesday Morning, 3 AM version and added electric rock backing. Boom, instant smash. Sensing Paul was about to become a global rock star, Kathy Chitty bowed out of the relationship. Paul flew back to New York and resumed his legendary partnership with Artie… leaving UK fans with a curious and wonderful solo album to be discovered only by the curious and diligent. And would-be winners of bar bets. 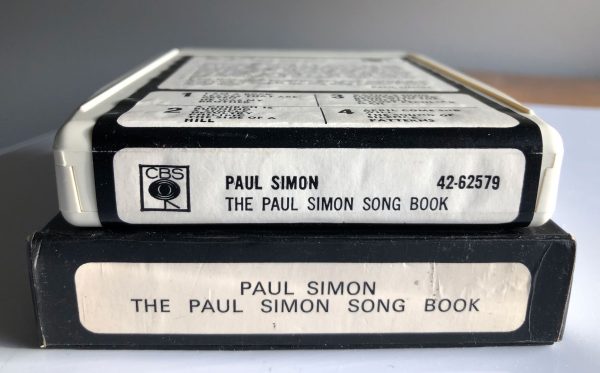 (The 8-track edition shown is a UK tape issued in 1970, perhaps to capitalize on the success of Bridge Over Troubled Water. It’s really a thing of beauty inside and out. As with many UK tapes, the color album art appears only on an outer box (this one even has a flap to lock the tape in securely). The cartridge label is printed beautifully on letterpress; you can feel the type as if it was embossed. The tape itself is exquisitely mastered, offering a real “you are there” experience with this clean, one-microphone recording.) 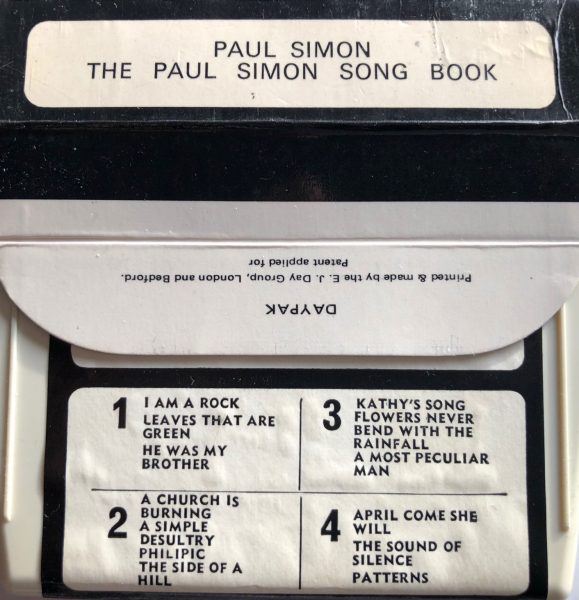 * Though “He Was My Brother” lists one Paul Kane as songwriter, that’s just a pseudonym Simon used. He also recorded and released a single of the song using the name Jerry Landis. Guessing the name comes from S&G’s early Everly Brothers-styled act Tom and Jerry (“Hey Little Schoolgirl”). But dig even deeper and give a listen to Paul’s rockabilly offering as Tico & The Triumphs (“Motorcycle”). Maybe these are the songs he “wouldn’t write today”!