Paul’s own collection of ’70s gems slipped through the cracks to become a bootleg and a homemade 8-track. 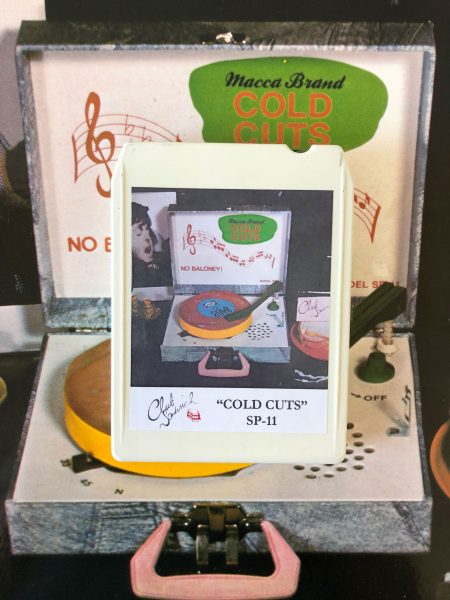 What’s the album? Cold Cuts is an artist-compiled, unreleased collection of outtakes recorded between 1971 and 1979, embellished and remixed over the next several years. (The 8-track shown is my own dub of a 1987 bootleg; more on that later.) 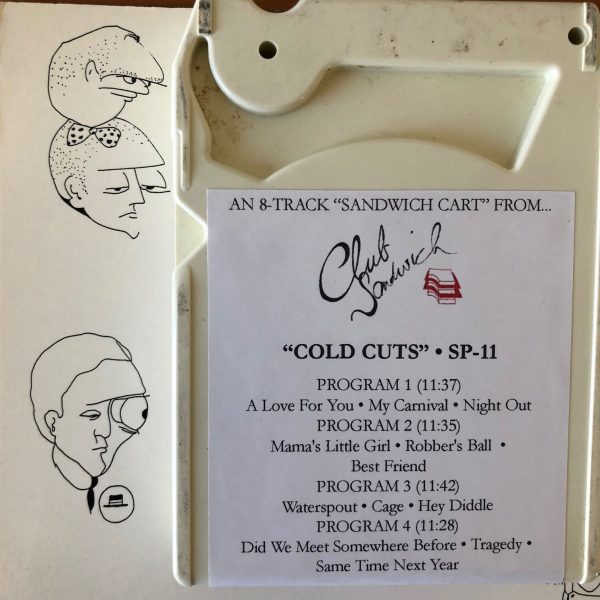 What does it sound like? The music is Paul’s usual blend of catchy hooks, inane lyrics, brisk guitar rock, dulcet love songs, folk and country tunes, and oddball comedy.

Why did you choose it? I thought most readers would be unfamiliar with it as it’s bootleg-only.

Is this his best album? Probably not, yet I revisit Cold Cuts more often than his legit releases for its mirth, cheer, and musical excellence.

What else had he done? Between 1970 and 1979 Paul had issued nine successful solo albums and a handful of worldwide hit singles, including six US Number One records. Most of these singles had non-LP B-sides, so it’s remarkable that Paul had even more great, unreleased stuff in the can. 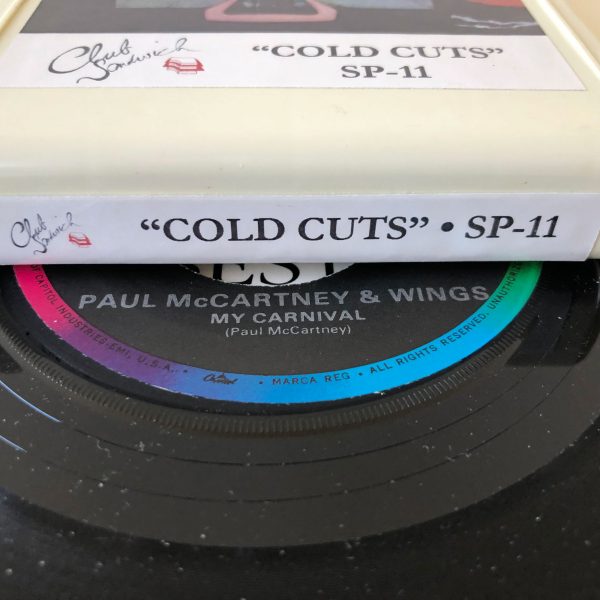 How and/or why did he record it? Starting with Ram in 1971, Paul started amassing a small stack of great songs that just wouldn’t go away. As early as 1974 Paul had planned to issue a bunch of these on a bonus record with a greatest-hits set, the double album to be called “Hot Hits and Cold Cuts.” This was almost issued in 1978, but either Paul or label EMI decided the single-album Wings Greatest would perform better at Christmas (it sold a ton). Paul revisited the project in 1979, 1981, and 1986, overdubbing, remixing, and reconfiguring tracks, but ultimately shelved the project.

What songs would I know? You probably heard “Did We Meet Somewhere Before” in the 1979 film Rock ‘n’ Roll High School (though it’s not on the album), and the superb “A Love For You” was used in the 2003 remake of The In-Laws. A few others trickled out as late ’80s B-sides, memorably the lilting mini-epic “Mama’s Little Girl.”

What other songs are good? The hit here is probably London Town outtake “Waterspout,” a reggae-tinged synth number about a mystical wellspring that causes visitors to fall in love.

Was the album a hit? It never came out, so no. But many bootleggers have released versions of the title.

What’s a cool song quote from the album? Paul stretches beyond his usual moon/June lyrics for the oddball “Robber’s Ball,” a kind of Disney-villain song with a Russian Cossack feel: “Naught can beat us Northern lads, the spitting image of our dads, especially when we’ve had a pint or two.” A shrewd prediction of “Gaston” from Beauty and the Beast, as it turns out.

What’s awesome musically? At first sounding like a flimsy Ram throwaway, “A Love For You” progresses to reveal sophisticated overdubs added by Wings members in later years. It’s like a whole history of the band in just one song!

Do the title and cover art work? They work extremely well, especially for a bootleg. Club Sandwich, Paul’s long-running official fanzine, is borrowed as a fake record-label name to make this seem like a fan-club release. The happy coincidence of “cold cuts” and “club sandwich” inspired the cover photo of a record player that spins classy deli slices but “no baloney!” (Ah, the irony of McCartney, a vegetarian since 1975, selling slabs of animal flesh — did we “meat” somewhere before?) 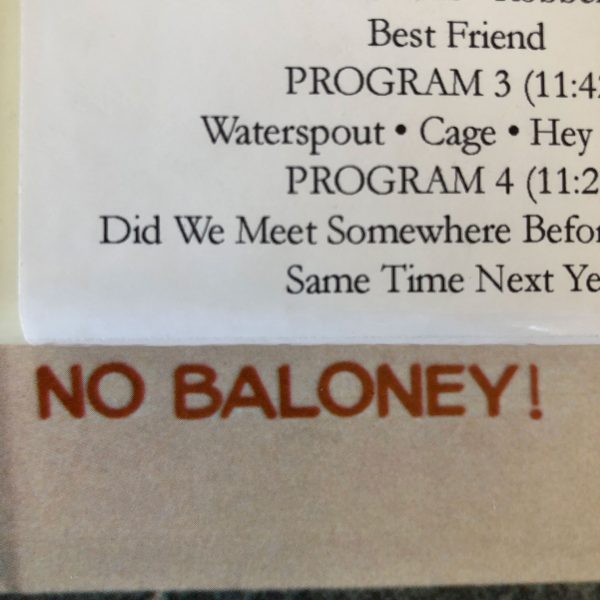 How’s the 8-track version? My fake boot-of-a-boot 8-track came out very nice, if I say so myself; sorry (not sorry) that all three of the killer ballads wound up together on Program 4. I thought about making it a ’70s Capitol cart but didn’t have a proper black shell, so just made it kinda bootleg looking like the original vinyl (with a variant spelling of “momma,” sorry). As on the original release, Paul’s name is nowhere to be found, to avoid alerting suspicious workers at the pressing and duping plants.

What’s missing on the tape from the LP album art? Only pen-and-ink caricature drawings, presumably by Paul himself.

Is this an old favorite of yours? Big time! Found the bootleg in spring 1987 at the long-gone Rene’s All Ears Records in Los Angeles, gave it to my friend Mark Kadlec, and listened to it plenty that year (since we were also roommates).

Are people still listening to it? Apparently so, and Paul hasn’t forgotten either. In 2009 he supposedly announced a sprawling three-disc outtakes anthology called “Cold Cuts And Hot Hits” (which may have been a myth; at any rate it never came out). In 2014 bootleggers released Hot Hits, Cold Cuts Completed, an anthology of all four versions of the album. As for me, I’m happy with just these twelve songs in their current form, playing over and over on endless loop cartridge…

What’s some random trivia about this? First, Back to the Egg outtake “Cage” has a chord sequence of C-A-G-E. Second, to use “Did We Meet Somewhere Before” in Rock ‘n’ Roll High School, director Alan Arkush paid just $500 — the McCartney deal of a lifetime.

When should I play this album? When visiting Mardi Gras, larceny festivals, or romantic geysers.

What’s another good album of his? Check out Wings’ underappreciated Wild Life or Paul’s electro-experimental McCartney II, itself the subject of another fine Club Sandwich bootleg. 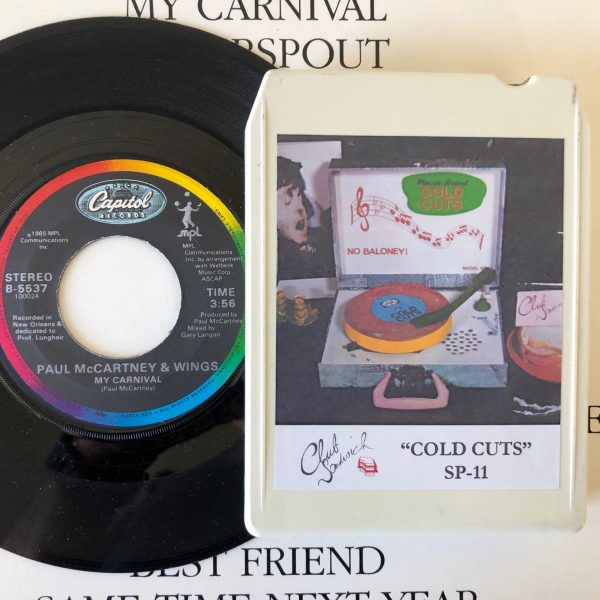