The pivotal fifth album by Mitchell, who turned 75 last week, contains threads of her folkie past, her pop-star present, and her jazzbo future. 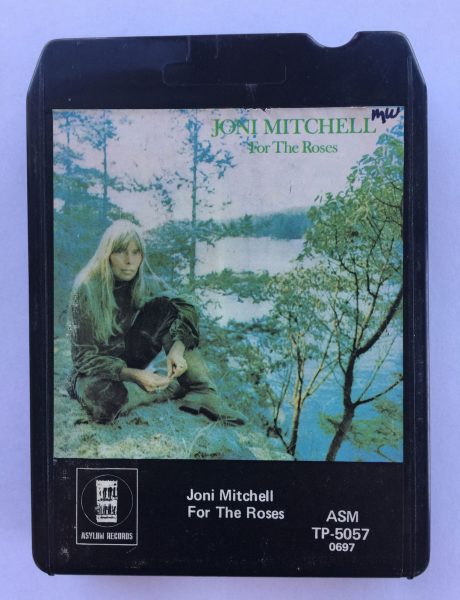 To me this album is where Joni Mitchell really hits her stride. Kind of like Another Side of Bob Dylan did for Bob, it shows Joni’s talents in full flower without the accompanying self-consciousness and need to play to a public persona. It falls between two excellent and better-known albums, the folkie confessional Blue and the jazz-pop juggernaut Court and Spark. For the Roses finds Joni exploring and combining all those styles intuitively and naturally.

This was the second Joni album I got to know. The first one was her magnificent live album Miles of Aisles, recorded on her Court and Spark tour. (I was driving in Big Sur in my sister’s car one spring; my friend found sis’ Miles of Aisles cassette and put it in the player. We were both blown away.) Next I picked up For the Roses (on cassette again). I chose it because it had two songs I loved from the live album, the cute pop single “You Turn Me On I’m A Radio” and the dark “Cold Blue Steel And Sweet Fire.” The rest of Roses proved more esoteric but still intriguing and beautiful.

The album’s aged well for me; decades later, the more abstract material is what I really enjoy. On first listen, songs such as “Lesson In Survival” and “Let The Wind Carry Me” seem almost improvised both lyrically and musically (though meticulously structured, of course). Though there are some rhymes, the lyrics feel like free verse, with accompaniment (usually just piano) ebbing and flowing as well. Some hints of Joni-yet-to-come also emerge in “Barangrill,” the kind of common-man appreciation she’d master on Hejira, and in the incredible layered vocal harmonies of which Prince would later become an outspoken fan. 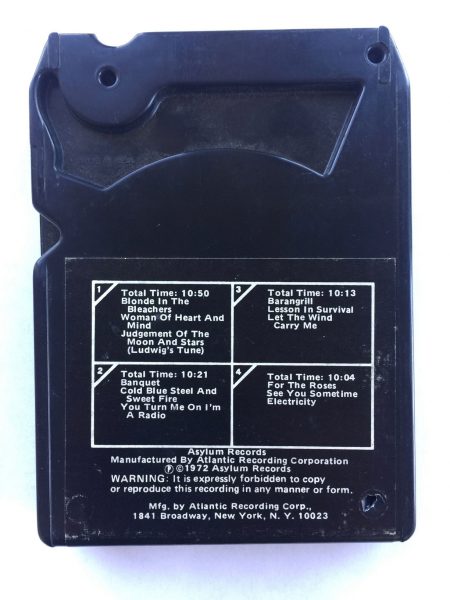 Though the 8-track completely alters the album’s structure, it accidentally finds new meaning in Joni’s tunes. The LP is bookended by songs about the struggles of being a musician: the music-industry snipe “Banquet” and the Beethoven tribute “Judgment Of The Moon And Stars (Ludwig’s Tune).” But the 8-track finds two other songs to set the theme, “Blonde In The Bleachers” and the penultimate “See You Sometime.” Both of these are songs about having a rock-star boyfriend (ostensibly James Taylor, with whom she’d just broken up) — while realizing that you’re becoming a rock star yourself. Kind of a profound message, too.

While the tape closer “Electricity” perhaps overextends the metaphor of electrical-circuit-as-romantic-relationship, it finds Joni telling the tale from a man’s point of view, which is interesting. But the big winner here may be the chilling “Cold Blue Steel And Sweet Fire,” a Dante-esque descent into the hell of heroin addiction. The Steel and Fire of the title could be a cool needle and hot dope — or it could be our icy will to survive and our heated urge to succumb: “Does it really matter if you come now, or if you come on later?”

Joni Mitchell is a genius on so many levels that I hope we can unpack them all while she’s alive. Her eight studio albums from the 1970s are all incredible; For the Roses is a fascinating lens through which you can glimpse her entire career, past and yet to come. 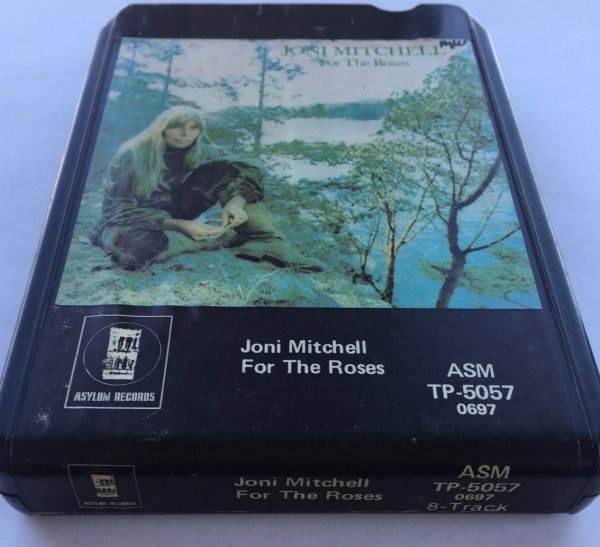 You can read last week’s installment here: The Who, ‘Quadrophenia’ (1973 Album, 1979 Film Soundtrack)