Let’s take a look at an unorthodox release of George Harrison’s fourth solo album. Though the groundbreaking and successful All Things Must Pass is a hard act to follow, Living in the Material World does a great job of recapturing that album’s spiritual themes and delicate pop songcrafting. The sound is similar, too: piano-led rockers adorned with acoustic strums and George’s trademark slide guitar leads, as heard on the hit “Give Me Love (Give Me Peace on Earth)” and the gorgeous “Try Some Buy Some.” 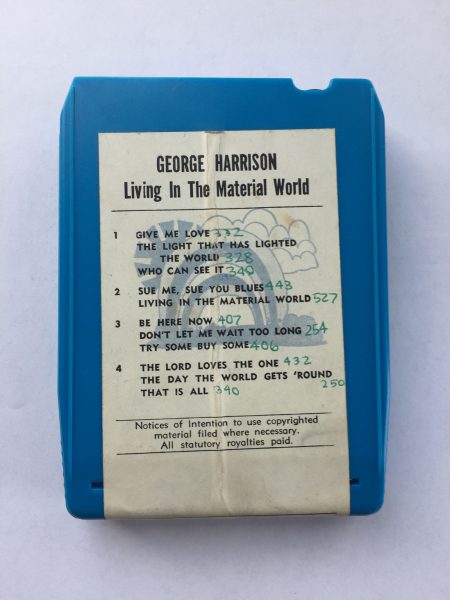 The album also has a song on it called “Sue Me, Sue You Blues,” amusing as George could have sued the pants off the makers of this illegal “bootleg” pirated tape. Note the unconvincing legal mumbo-jumbo on the label; “all statutory rights paid” suggests that they forwarded the small songwriting royalty charge but skipped the hefty master license fee — and permission to use the material.

This seems to have been dubbed from an official 8-track of the album; you can hear the tape hiss get louder at the start of the program as the source tape is engaged. At least the bootleggers bothered to use a blank tape of the correct length. The sound is not great; it’s a bit brittle and crunchy but certainly listenable. 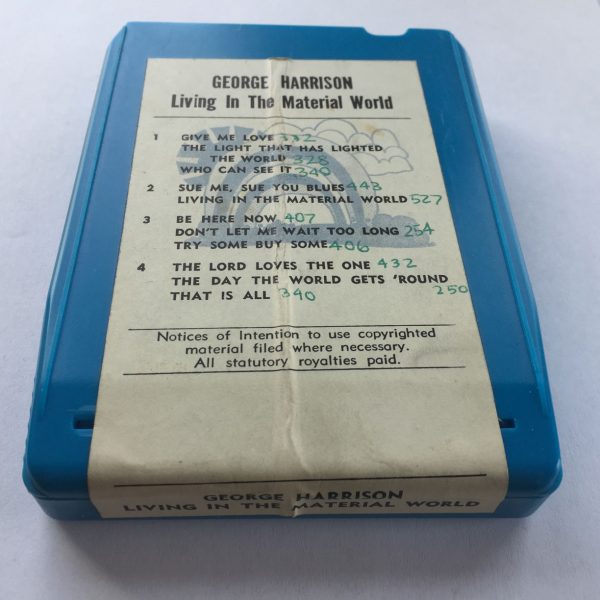 Some bootlegs just list the tracks, but it’s just as common to find them with generic “hippie” or “rock” artwork that can be easily adapted for multiple releases (see my earlier 8-Trackin’ post for a glimpse at these oddball labels). Sometimes the juxtapositions of album and art are amusingly off; for instance, a copy of Jethro Tull’s Stand Up features a graphic of Formula One race cars. In this case, however, the rainbow artwork plays nicely into the album’s uplifting theme.

This sort of pirated cartridge is what they call a “truck stop tape,” sold cheaply by rural small-town stores and roadside coffee shops, possibly alongside legitimate 8-tracks. I’m picturing a truck driver blasting his spiritual new George tape, just purchased with his Thermos of coffee, as dawn breaks over the Interstate. To quote an earlier George song, let it roll.

You can read last week’s installment here: Rolling Your Own