FUNKADELIC, ONE NATION UNDER A GROOVE (1978)

The album’s ubiquitous groove has barely started when the vocals leap in: “So high you can’t get over it, so low you can’t get under it, so wide you can’t get around it.” And so big, you can’t fit it into one band name — or record label. We’re talking about Funkadelic and its counterpart Parliament, also known as Parliament-Funkadelic, or for those of us hurrying to the dancefloor, simply P-Funk. This was basically a huge ensemble of talented musicians described by Wikipedia as an “American funk, soul and rock music collective headed by George Clinton.” The endlessly crafty Clinton got Parliament signed to Casablanca and Funkadelic to Warner Bros, thus doubling the bands’ label support while allowing them to have competing chart hits at the same time. Kinda genius, really. 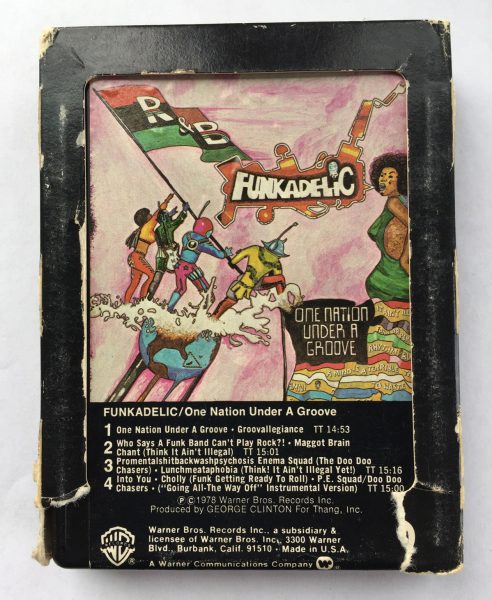 Along with sister acts Bootsy’s Rubber Band, Parlet, and The Brides of Funkenstein, Parliament and Funkadelic shared a wacky, raunchy, underground-comix, science-fiction mythology, all highlighted by Clinton’s extended portmanteau words (for instance, the present album’s Promentalsh*tbackwashpsychosis). Lyrically, there’s a strong thread of “conceptual continuity” that links Clinton to rock acts such as Frank Zappa. But most of all (and I’m sorry it’s taken me a paragraph and a half to mention this), the ensemble played some of the longest, tightest, most hypnotic funk grooves ever committed to vinyl. Along with godfather James Brown, George Clinton has found his works borrowed and stolen heavily in the sampling generation. (Article continues after song…)

Looking at the charts, Parliament had more hit LPs than its sister act; One Nation Under A Groove was Funkadelic’s only album to make the top 100. But what an album! So wide you can’t get around it, the LP offered six epic tracks (all over six minutes); a bonus 7” ep added four more bizarre and wonderful cuts to the mix. This smaller record offered a live remake of the earlier epic “Maggot Brain,” a true late-night FM-radio stoner number that underscores the album’s question, “Who Says A Funk Band Can’t Play Rock?” Elsewhere, the album’s themes include freedom of thought, national unity, lunchmeat, and scatology. Welcome to Planet P-Funk. 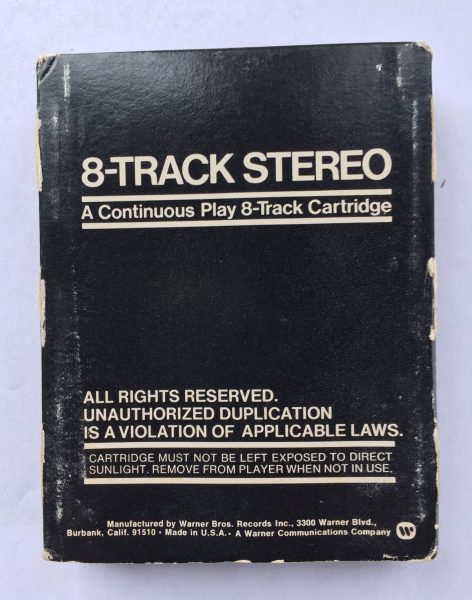 This is a rare instance where the 8-track is actually superior to the original LP/EP configuration, if only because it interweaves all the original tracks into a unified listening experience that Clinton himself must surely have approved of (or at least enjoyed). All ten tracks from the original package are smoothly sequenced, remarkably with no broken or repeated songs. And face it, you don’t want to be juggling an LP and a 7” while you’re partying, dancing, romancing… or just getting your groove on. 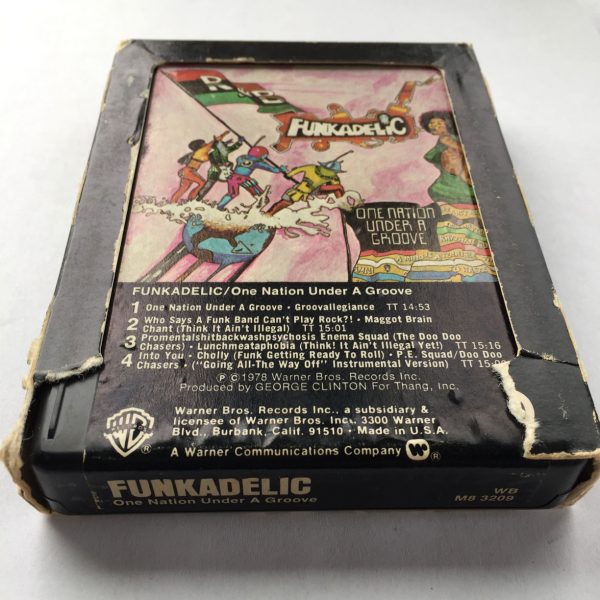 More Funkadelic at Cherry Stereo: Playback!: Parliament-Funkadelic, ‘Give Up The Funk’ (Live ’76)