David Cassidy’s death this week hit me harder than I expected — he was just a silly, disposable teen idol from four decades ago, right? Maybe so, but he was also a fixture of my childhood. I grew up with sisters, so 16 Magazine and Tiger Beat were always around, filling me in on the manufactured antics of Cassidy and his “rivals” Donny Osmond and Bobby Sherman. I found Donny cutesy and shrill and Bobby toothy and off-key, but David was cool and non-threatening. He might date your sister but he’d take time to shoot a few hoops with you beforehand. In a way he was like the big brother I never had. 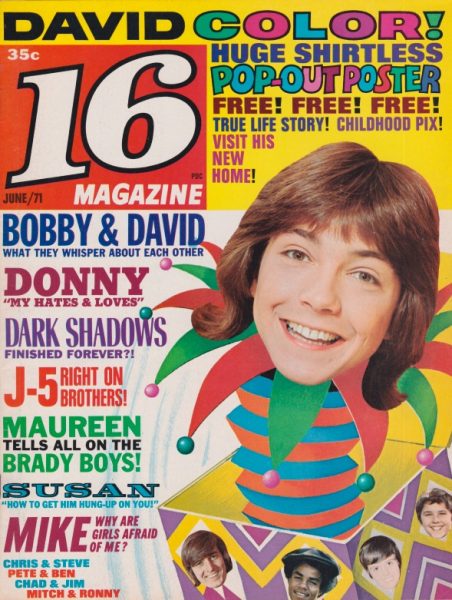 Childhood reading material, though I could have done without the ‘shirtless pop-out poster.’ Here, sis.

Scattered amongst the teen fanzines in our house were well-worn copies of the first three Partridge Family albums, which I quickly learned by heart. These featured lite-pop songs from the self-titled TV show about a rock-band family and its plucky single mom (Cassidy’s real-life stepmom Shirley Jones). Decades later I wasn’t too surprised to learn that Cassidy was the only Partridge performing on the albums, singing lead over backups provided by the Wrecking Crew and the Ron Hicklin Singers. (The talented Jones got a few lead vocals in, but not many.)

Cassidy nicely managed silly, undemanding pop songs such as “I Think I Love You” and “I’ll Meet You Halfway.” But hidden within the albums were dark, urgently sexy numbers like “I Can Feel Your Heartbeat” and “One Night Stand,” brought to life by Cassidy’s clear, intense tenor. Maybe this guy could be a rock star after this Partridge thing blows over? I remember him cutting a few cool-looking albums in later years but never checked ‘em out.

Happily (yet sadly) I got the opportunity to do so this week. I’d just bought a pile of 8-tracks from a Craigslist seller that included albums by Donny Osmond, Bay City Rollers, Partridge Family, and the David Cassidy album presented here. Upon hearing of the singer’s death, I dug out the Cassidy cartridge to give David The Rocker a shot. 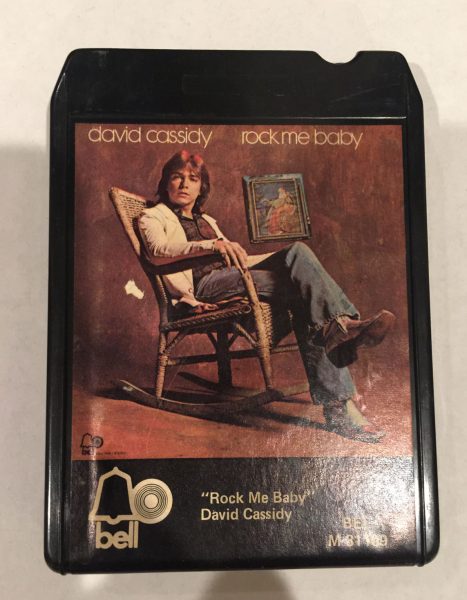 1972’s Rock Me Baby was David’s second solo album, recorded as the Partridge Family’s popularity began to wane. More than anything, it presents Cassidy as a singer of blue-eyed soul, a genre that mixed rock instrumentation with impassioned vocals. Other blue-eyed soul acts included The Box Tops and The (Young) Rascals; Cassidy covers two Rascals songs here, “Lonely Too Long” and “How Can I Be Sure” (the latter a Top 25 hit). The album features a solo songwriting effort from Cassidy (“Two Time Loser”) as well as two numbers Cassidy wrote with future pop star Kim Carnes (“Some Kind of a Summer,” “Song for a Rainy Day”). 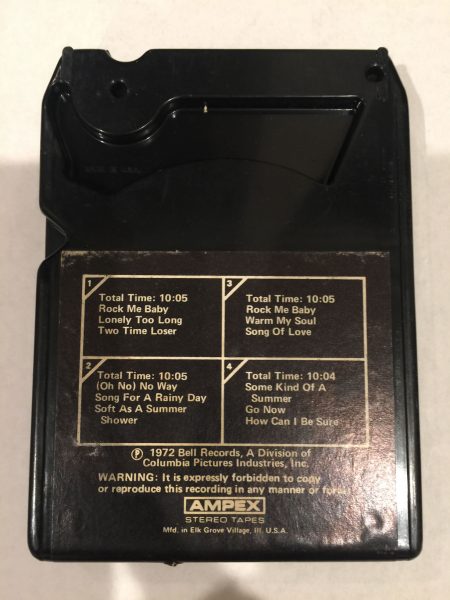 A breathless Allmusic review claims the title track (not the blues standard) has “Cassidy transforming into Electric Warrior-era T. Rex.” That’s a bit of a stretch, but it’s certainly a glam-rock groove. Some tracks suffer from Elvis-style brass and backing vocals (a latter-day remix would help), but overall this is a solid effort that might even please power-pop fans. (Though the 8-track repeats the song “Rock Me Baby,” I didn’t mind that one bit.)

Supposedly his solo career high came with the self-effacingly titled The Higher They Climb, The Harder They Fall from 1975, but I haven’t heard that yet (I’ve just ordered the tape, in the usual fallen-rock-star eBay buying frenzy). For now I’ll cycle through the Rock Me Baby cartridge one more time and salute David Cassidy, my fallen big bro. 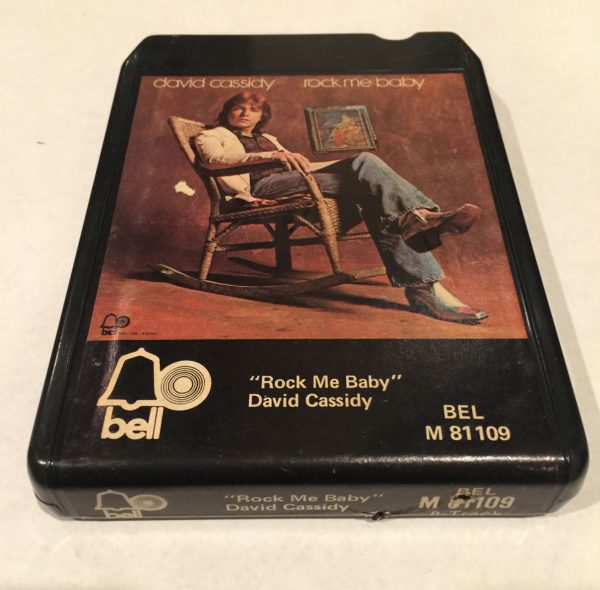 Happy Thanksgiving, everyone! Join us for more 8-Trackin’ next Thursday.