15 fun facts about the notorious sci-fi Christmas special and its only soundtrack release on 8-track. 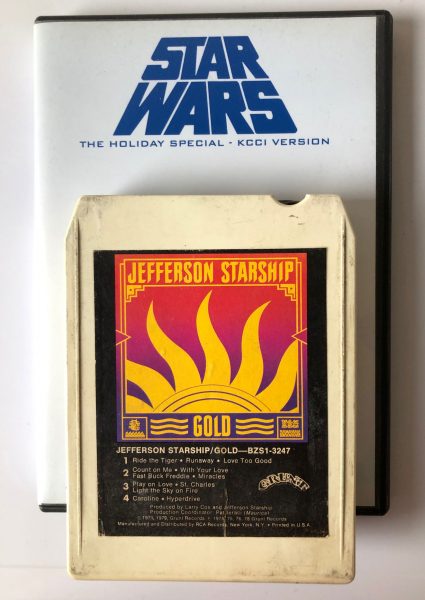 1. George Lucas hates the Star Wars Holiday Special. With its dated comedy, odd music, and tedious pacing, this 1978 exploitation of his 1977 movie isn’t what Lucas had in mind when he okay’ed it. He claimed that he wanted to grab a sledgehammer, “track down every [bootleg] copy of that show and smash it.”

2. Still, the concept could have worked. The idea for the program was that a member of the Star Wars team would be delayed around the holidays; their worried family would distract themselves with electronic amusements, offering TV viewers comedy, drama, and musical interludes.

3. Much of the dialogue is in untranslated Wookiee language. Sadly, the family chosen was Chewbacca’s, and none of them speak English (or Galactic Basic), instead barking, yelping, and grunting for minutes on end. This is very strange to watch.

4. The show has a plot, sort of. As Chewbacca and Han Solo fend off enemy forces flying back to Kashyyyk, the Wookiee’s family is hassled by Imperial leaders and stormtroopers wanting to know more about Chewie’s rebel activities. With the help of friendly trader Saun Dann, they distract and confuse their foes until Han and Chewbacca arrive to set things right. Afterwards, all rebel believers astral-project into outer space to celebrate their secular holiday.

5. The word “Christmas” is never uttered. Wookiees and their friends celebrate Life Day, an annual observance of diversity, friendship, and peace. So there’s no mention of Santa Claus or the Christian nativity (this was “a long time ago”). However, Saun Dann does bring gifts for the family in a big Santa sack, and the Life Day gathering includes robes, candles, and mention of a “Tree of Life.”

6. The stars of the movie appear. Via video links, Mark Hamill, Carrie Fisher, and Harrison Ford reprise their now-iconic roles from the 1977 film. Though Hamill and Fisher are phoning it in (by Carrie’s own admission, she was a bit medicated), Ford delivers a surprisingly committed performance, especially interacting with Chewbacca’s wife Malla.

7. The supporting cast is made up of TV comedy actors. Alas, Art Carney (The Honeymooners), Harvey Korman (The Carol Burnett Show), Bea Arthur (Maude), and Diahann Caroll (Julia) yank us out of that far, far away galaxy and smack-dab into ’70s network TV.

8. In one sketch, Korman appears in drag — and brown face paint. He plays a cooking-show host that Malla can’t follow since she lacks his four arms. Korman’s character’s campy attire and swarthy complexion derive from its alien origins, but it’s still painful to watch. (Plus the sketch itself is desperately unfunny.)

11. Fanboys can’t ignore the show — because it contains Boba Fett’s first appearance anywhere. On a portable device, young Lumpy watches the cartoon “The Faithful Wookiee” (written by Lucas), in which Lumpy’s own father Chewbacca interacts with bounty hunter Boba Fett. The cult-favorite Fett wouldn’t be seen in the movies until 1980’s The Empire Strikes Back.

12. The show has never been broadcast again or (except for the cartoon) released on video. The special’s commercial failure and Lucas’ horrified reaction have prevented the Holiday Special from receiving any official release. However, old-school fanboys with $1000 VHS decks and $25 tapes (1978 prices) captured the show’s sole broadcast, making it available to fans on bootleg tapes and online streaming (seek and ye shall find). (The cartoon segment would finally appear as a 2011 Blu-ray box set “easter egg.”) 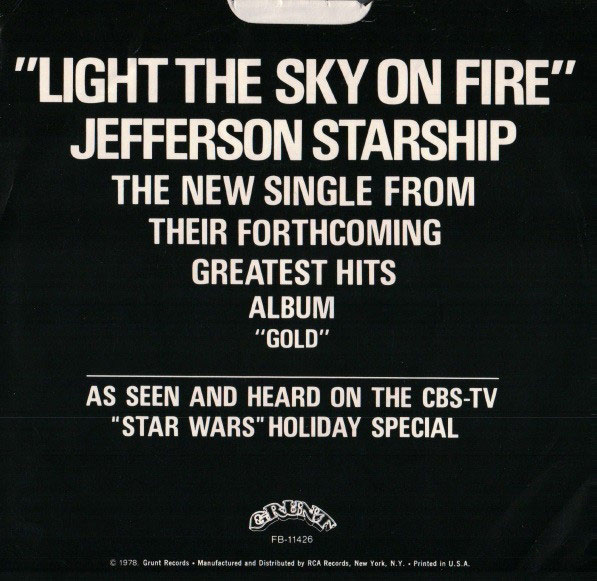 13. For a few minutes, the show kinda rocks. Saun Dann briefly distracts an Imperial officer by showing him a rock-music performance on Malla’s new holo-player: a miniature Jefferson Starship plays the brand-new number “Light The Sky On Fire.” (Franchise aficionados have struggled to incorporate this 1978 song into the Star Wars universe, particularly its spoken lyric “The great god Kopa Khan came from the stars and vanished.”)

14. At the time, the “Light The Sky On Fire” 45 was the only proof the show ever happened. The retail single sleeve states that the song was “seen and heard on the CBS-TV ‘Star Wars’ Holiday Special.” (The promo sleeve also boasts, “estimated viewing audience 50 million people – play it now!”) No other merchandise from the special was made available at the time (Kenner dolls of Malla, Itchy, and Grumpy were planned but cancelled), so without the 45 you might have thought the Special was just an urban legend – or a strange, boring dream.

15. “Light the Sky on Fire” is only on the Gold 8-track (and cassette). The original vinyl release of the first Jefferson Starship best-of included “Light The Sky” on a bonus 45 that was dropped from later pressings. If you were a hardcore Starship or Star Wars fan, you had to track down the tape to solve the puzzle of the ethereal Kopa Khan.

So does George Lucas want to find every 8-track of Jefferson Starship Gold and smash those as well? That’s just one more Yuletide mystery for this Christmas season. Happy Life Day from 8-Trackin’! 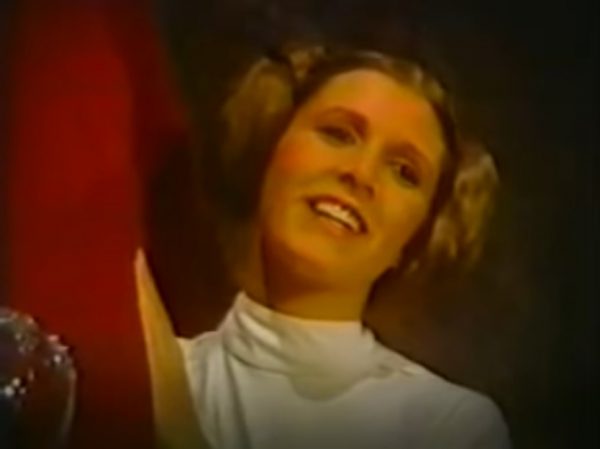