Over the ’70s, the iconic stoner-comedy duo ventures bravely (if not always successfully) out of its weed-soaked comfort zone.

As a casual AM radio listener in the ’70s, you might have been baffled by Cheech & Chong’s oddball hits: a heavy-metal jam complete with argument, a sweet soul number about basketball, another R&B slow jam about overeating. And if you bought one of their albums, you were probably even more confused. Let’s sift through Cheech & Chong’s wild ’70s output via this stack of stoner-friendly 8-tracks.

Cheech and Chong (1971): Other than a “blues” song about exposing yourself and a radio jingle for legalized weed, there’s no music on this debut. Instead, you get studio-produced comedy sketches created by the duo, who had met in Vancouver, BC. Since most bits are about buying, selling, and taking drugs, it’s a kindred spirit to the A Child’s Garden of Grass LP issued the same year. 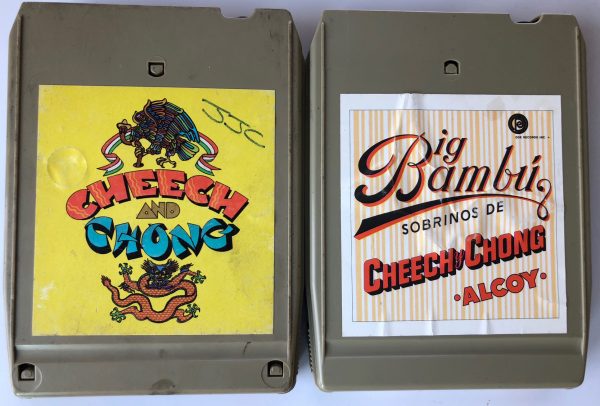 The album launches the adventures of Pedro and Man, a hyper Latino dude and a laconic druggie (played by Cheech and Chong respectively), a saga continued on all six of these albums. (A few months after the debut, Pedro and Man would narrate the “Santa Claus and His Old Lady” single.) Though frequently juvenile (“whack him in the pee-pee”), the album still feels like your own private comedy stash, something to hide from your parents. (To avoid breaking any sketches, the 8-track annoyingly repeats two of the least funny routines.)

Big Bambu (1972): Still no music, but here the duo branches out from pure drug humor into comedy proper — and comes up with a hit album. “Sister Mary Elephant” (later a hit single) features Cheech as a female parochial school teacher who screams at her rowdy class to “SHADDUP!” Some great laughs as a pair of frisky dogs chases cars to sniff carbon monoxide: “(You can get) brain damage from car exhaust?” / “No, brain damage from getting your head run over.” Elsewhere, dark, high-concept bits suggest Monty Python or the National Lampoon: a man tortured into signing a statement saying he hasn’t been tortured, a skyscraper that’s a jumping platform for the despondent. A couple sketches — a drug game show and a “Bandstand” spoof — are performed live, giving us our only chance to hear Cheech & Chong working with an audience. (On the 8-track, an entire program —the television medley— is repeated in full, perhaps to confuse stoned listeners.)

Los Cochinos (1973): Just as big a hit as Big Bambu and arguably an even better album. It feels like the duo’s working more within a classic comedy milieu, one you don’t have to be stoned to appreciate: welcome to the mainstreaming of Cheech & Chong. 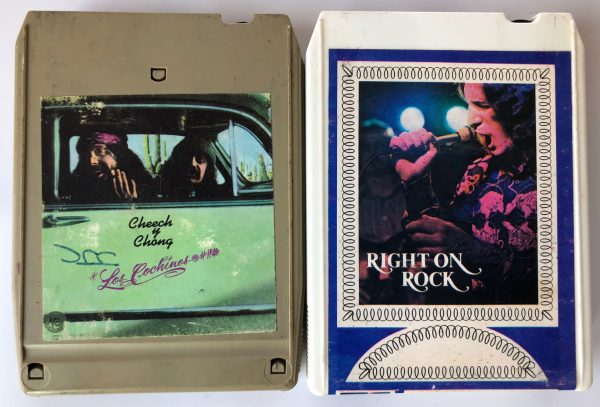 As part of that, we get their first-ever pop song and it’s a doozy. A spoof of the swoony soul record “Love Jones,” “Basketball Jones” tells of the falsetto singer’s intense passion for the sport. Uncredited, George Harrison and Carole King lend their pop magic to this surprise hit single. Only half the sketches on this album are drug-related, we get into some sex material thanks to a drive-in movie bit, and the team tries its hand at Jewish, Russian, black, and Canadian characters. Branching out nicely; now the only problem is to keep it going… (The 8-track of this album is great too; it breaks two sketches but doesn’t repeat any.)

Cheech & Chong’s Wedding Album (1974): This time around C&C manage two very funny pop songs, though only one was a hit. “Earache My Eye” (#9 US) fakes us out with a Deep Purple-meets-Jethro Tull rock tune that lapses into an argument between an angry dad and his lazy son, who’d been playing the heavy-metal record. “Black Lassie” is a Blaxploitation funk number paying tribute to a streetwise “All-American dog,” though the vocal impression of Johnny Cash messes it up. Maybe funniest are the two sex sketches: in one, a frisky couple’s noisy groping syncs up with a TV wrestling announcer’s play-by play (“now they’re giving it to each other!”). Funny stuff, but we’ve turned a corner; there’s almost no drug humor now, and in one awful sketch our stoner heroes Pedro and Man are reduced to babysitting duty. (Note: my 8-track pictured here is a bootleg, though the generic “hard rock” label art works nicely with “Earache My Eye.”)

Sleeping Beauty (1976): Not sleeping exactly, but Cheech & Chong were starting to lose their way. The ambitious but unfunny title track is a 16-minute retelling of the classic fairy tale; with its cockney British narrator, the piece was perhaps inspired by Monty Python’s Holy Grail film. One bizarre sketch has senior citizens as cattle in a sadistic rodeo competing in a “bed pan relay.” Frisky dogs Ralph and Herbie return for a dog-pound visit full of old prison-movie clichés. In Charlie’s Angels spoof “T.W.A.T.,” two female agents try to defend a woman’s privates from invasion by a male member. It’s funny, if only as a nonstop marathon of filthy double entendres (“They’re looking for an opening,” “We’re not licked yet”). 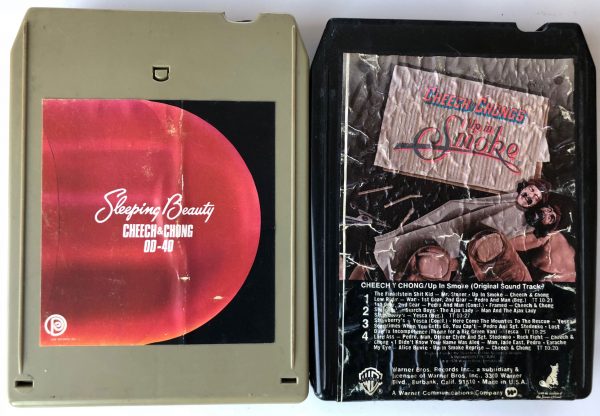 Pedro & Man only appear as a brief setup for the album’s weak single attempt, a remake of the Coasters’ oldie “Framed” rewritten as a drug bust. Let’s skip that and listen instead to the duo’s fine 1977 45 “Bloat On,” another soul spoof. It didn’t turn up on album or 8-track until 1980, but that shouldn’t spoil our appetites…

Up in Smoke (soundtrack) (1979): This is the album tie-in to the team’s unexpectedly successful 1978 film, which offered 86 straight minutes with stoned heroes Pedro & Man. Though not terribly satisfying as a comedy album (many bits don’t make sense out of context), it’s a really fun listen all the same, mostly from hearing Cheech & Chong doing simple weed jokes once again. You also get to hear the duo playing opposite female performers, which is a blast. The funk-music score cues by Waddy Wachtel and Danny Kortchmar are superb, nice car jams for riding out. But the real hidden treat is “Searchin’,” a Latino/reggae-tinged remake of the Coasters (again!), with lyrics about scoring weed. With Up In Smoke (album and film), it feels like our boys have reclaimed their mantle as the kings of stoner comedy. So pay tribute to Cheech & Chong’s decade of fine underground humor by sparking your lighter (and anything else on hand).