The family and I went up to Seattle this past weekend. I was specifically interested in finding 8-tracks, so I had reached out to Seattle Reddit users and record stores to find out where vintage carts might be hidden. I found nine good options and dragged my poor fam with me to all of them! Join me as I revisit this fruitful dig… 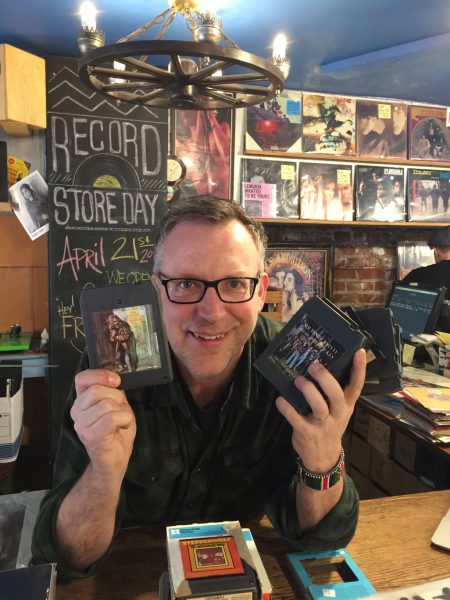 Easy Street Records: “Are you Andrew?” asked this very helpful fellow when he found me rummaging the carts. I’d corresponded with Andy online; he’d sent me a picture of the store’s tape supply and also set aside a secret box of 8-tracks just for me. The store itself is an amazing little shop with hoppin’ downstairs café in the relaxing, cheerful West Seattle area, which we visited on our way into town. Highly recommended for vinyl as well as tapes (you can order a beer and sip while you shop!). 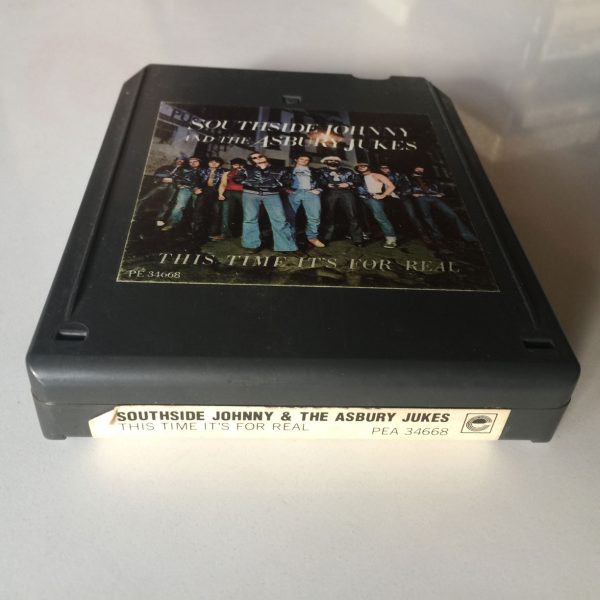 Among the ridiculously affordable finds at Easy Street was this brassy, soulful second album (1977) by Southside Johnny. It features three songwriting collaborations with Bruce Springsteen and backing vocals from doo-wop groups the Drifters, the Coasters, and the Satins. (Article continues after song breaks…)

Southside Johnny and The Asbury Jukes: ‘Without Love’ (1977) 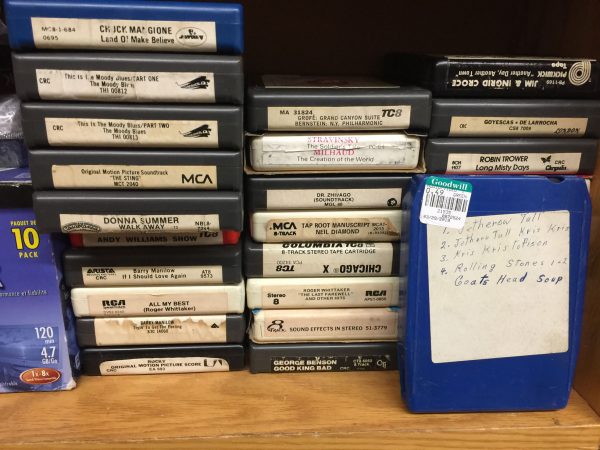 Goodwill (Lane St.): I never see 8-tracks at Goodwill stores in Portland, so I was happy to find even this meager stack. I passed on the “Jetherow” Tull tape and George Benson’s funky Good King Bad (already had it, it’s great) but grabbed the four in the upper left of the photo, the Sting soundtrack (1974) having been a favorite of my teen years. 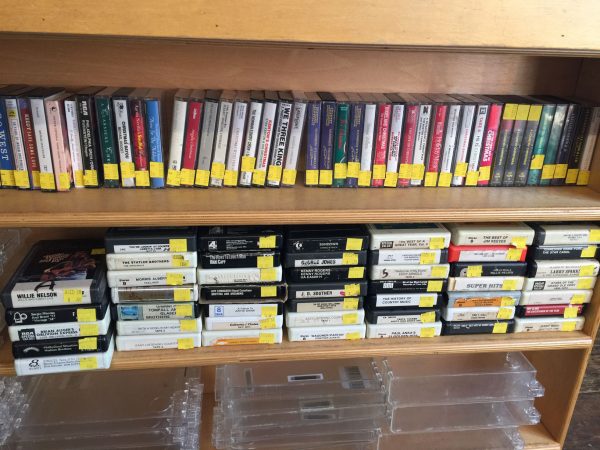 Everyday Music: On to the lively Capitol Hill district, where tree-shaded Pike Street always reminds me of NYC’s East Village. Though this huge store’s 8-track selection was as pathetic as the ones in its Portland locations, the prices were dirt-cheap: 10¢ to 25¢ per tape. I did find a nice Sergio Mendes and Brasil ’77 title. 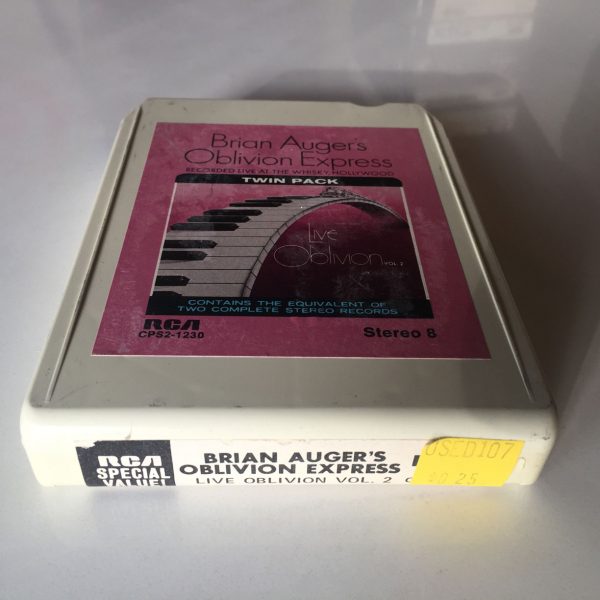 I also picked up this cool cart (1976) from Auger’s soul-jazz-rock band of the ’70s, featuring an epically long version of Marvin Gaye’s moody “Inner City Blues.” 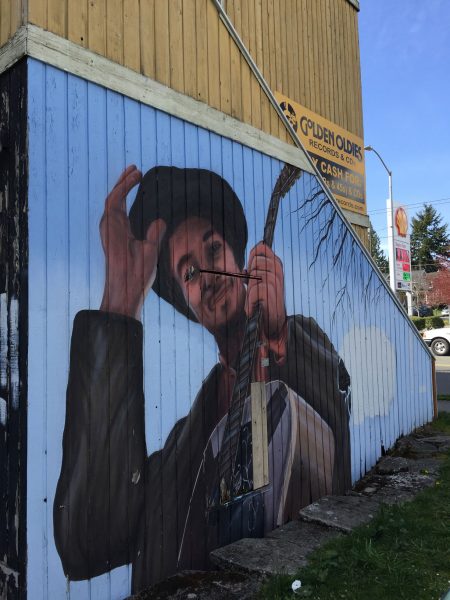 Golden Oldies: After checking in at the hotel, we headed north to the University of Washington area, home of three great 8-track stores. First was this large and pleasant shop, somewhat neglected as it’s a bit of a hike from the school. This great mural of Cowboy Bob Dylan was most welcoming. 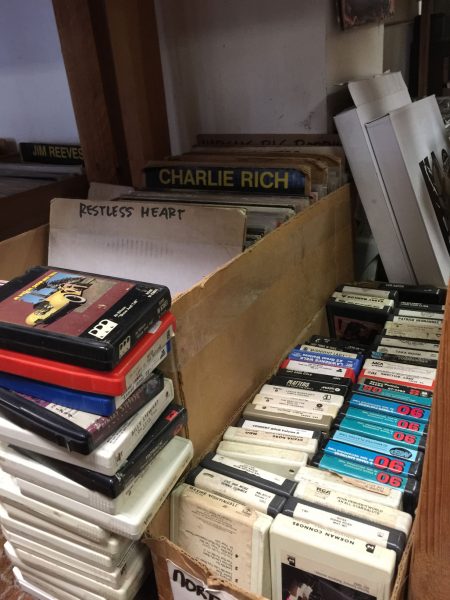 One stash of tapes near the register was kinda eh, but a second supply on the floor beneath the punk vinyl had plentiful treats, mostly R&B, funk, and soul-jazz, all just $1 each. (That stack on the left represents my finds, which I edited only slightly.) 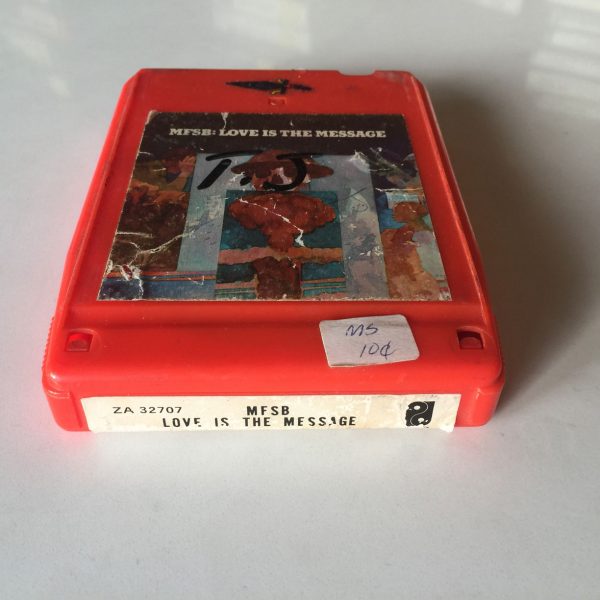 One cool grab at Golden Oldies was this pivotal proto-disco album by Philly legends MFSB (learn more in my Disco Lab review of its two key tracks). 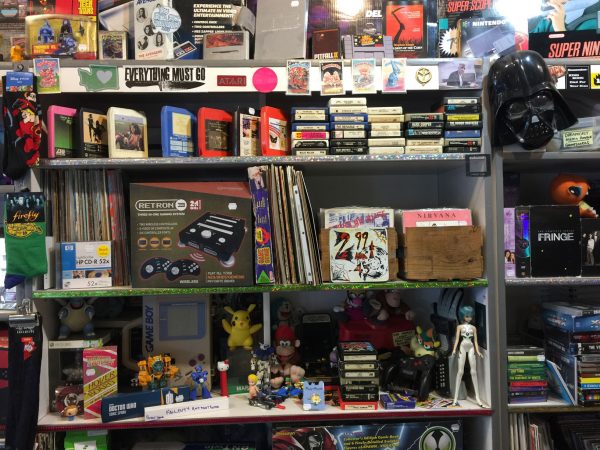 Al’s Music, Video, & Games: This quirky, venerable shop on bustling University Avenue stands out amidst its predictable collegiate neighbors Buffalo Exchange, Urban Outfitters, and vape stores. Its small, well-curated selection of 8-tracks is kept behind the counter to thwart light-fingered thieves of outdated media, whoever they are. 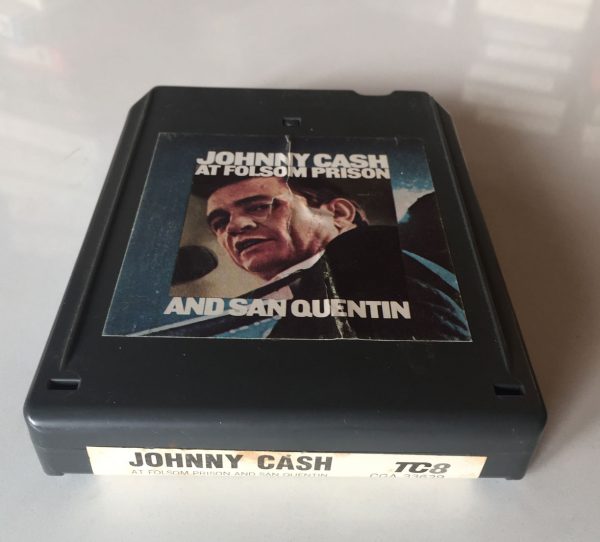 I found a few very nice tapes here, including this 1974 “twofer” reissue of Johnny Cash’s 1968 and 1969 prison albums. The latter show (San Quentin) yielded the oddball hit “A Boy Named Sue” along with Johnny’s iconic “flipping the bird” photo image. The seller was sad to see this tape go, but dude, when you price classic Americana titles at just $4, that’s what happens. 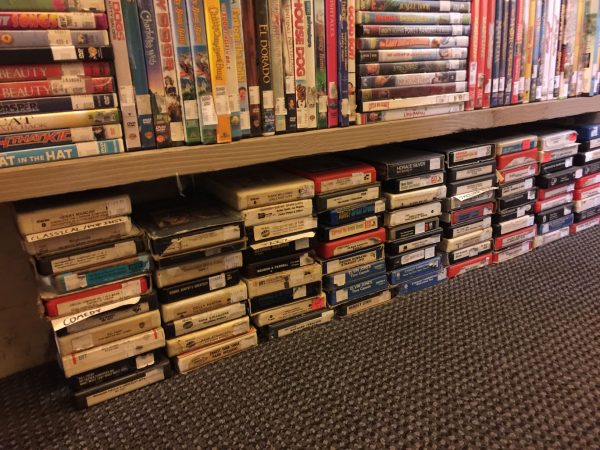 Neptune Music: In the basement of performance venue Neptune Theater is this crammed yet well-organized cave of wonders. Its thousands of slabs of vinyl are annotated by the owner with handwritten listening notes. Beneath masses of DVDs and VHS tapes is this impressive collection of 8-track carts seemingly untouched for decades, some even with cobwebs. The rock tapes were pretty well picked over, but the soul and jazz sections had some real gems. 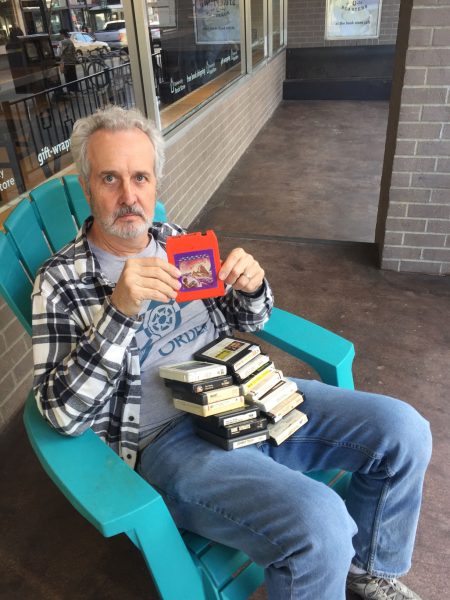 Here is your humble narrator awaiting my family outside of University Bookstore (a great spot for your bookish-minded companions). I’m holding a favorite Neptune grab, Herbie Hancock’s mega-funky Thrust (1974). (I still need Head Hunters but this’ll do for now!) 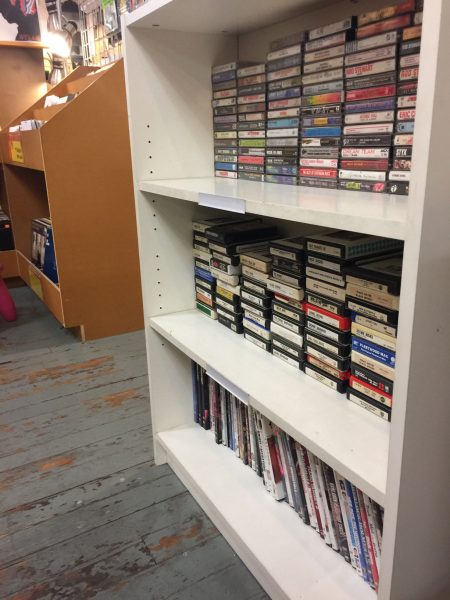 Fremont Antique Mall: The next day, we stepped out of a very chilly morning into this colorful museum of the recent past, where I demonstrated to my son how to rotary-dial a telephone. In the middle shelf of this large booth maintained by nearby shop Jive Time Records was an absolutely stunning collection of mid-80s “club tapes,” exclusive rarities offered only to mail-order subscribers (see the end of my recent tape-club post for more info). I grabbed a bunch of these for really cheap! 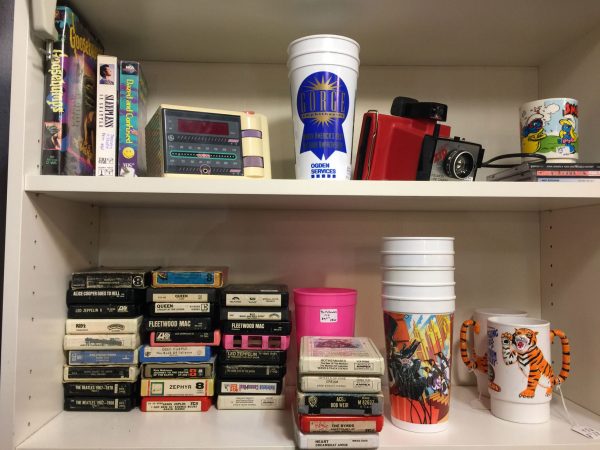 While I ooh’ed and aah’ed at the club tapes, my thoughtful companions found this remarkable stash for me elsewhere. It’s always a treat to find little piles of carts tucked away amidst other ephemera of lost ages. 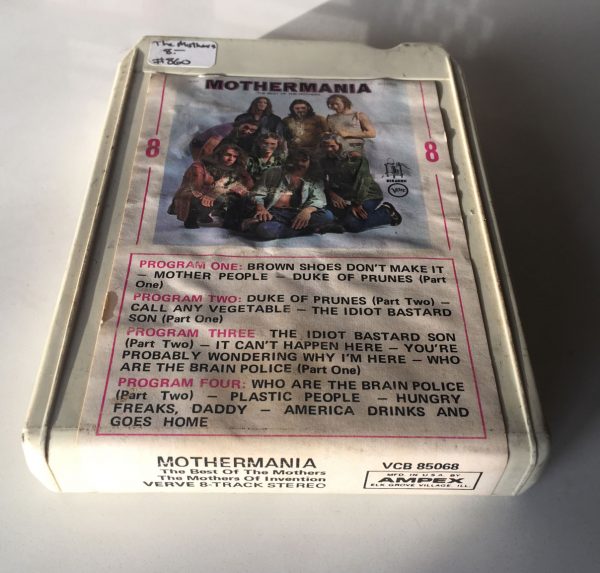 On that ephemera shelf I found a fantastic rarity: this 1969 collection of early Mothers of Inventions tracks compiled by Frank Zappa himself. Its alternate mixes and edits make it essential even for hardcore fans. I noted this tape had a melted roller (a rubber component that had disintegrated over the years) that made it unplayable. I figured I’d be able to fix it, and I have — sounds Frank-tastic! 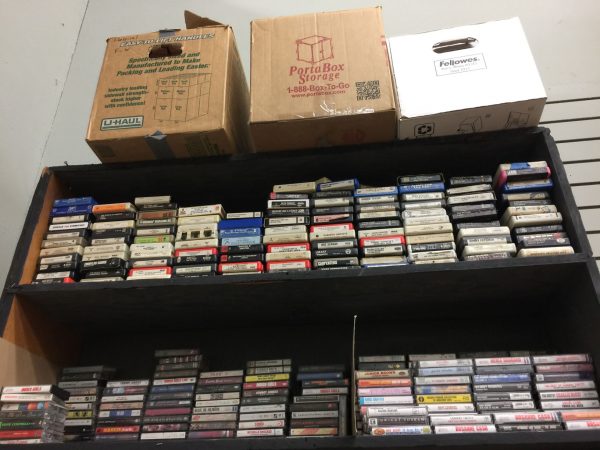 Bop Street Records: This massive archive of half a million records is presided over by music buff Dave Voorhees, who can recite the top forty classic rock acts in a mere twenty seconds (just ask him). Dave showed me these shelves (stacked two deep) and the boxes atop them, all three stuffed full of tapes. It took half an hour just to dig through the hundreds of carts that were there, much more than any other Seattle store. 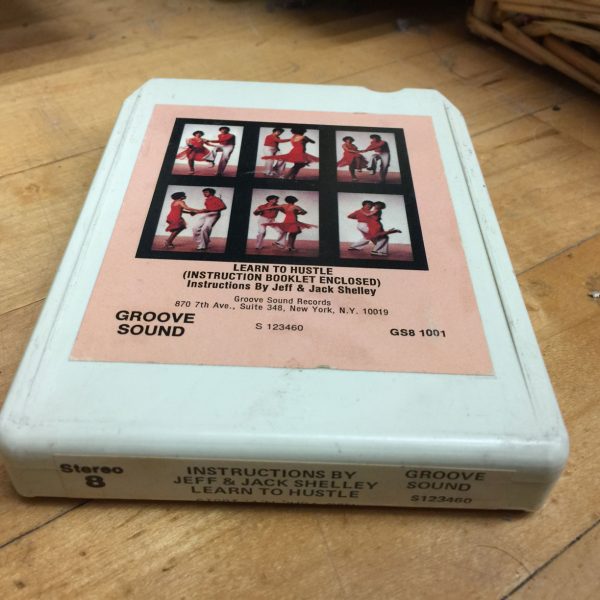 I couldn’t see myself buying this one, but I was dying to hear what it sounded like. (“Step back. Now spin. That’s it, yeah! You’re in the groove!”) Sadly the “enclosed” (how?) instruction book was long gone. 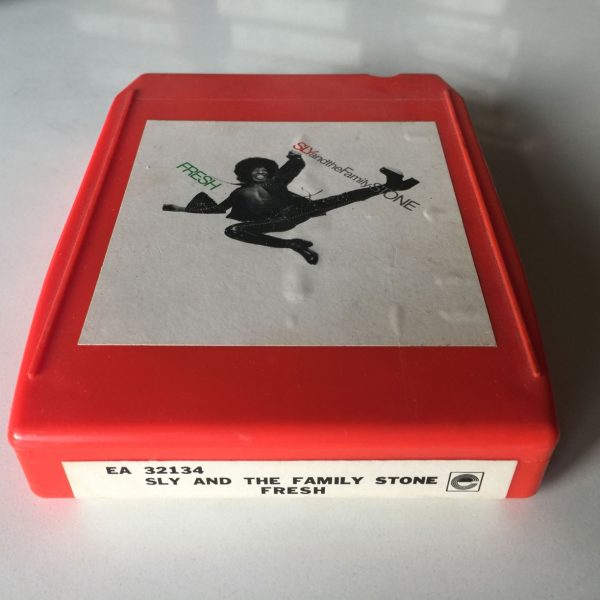 I had to put a few back but came away with five great tapes, including a long-sought Herb Alpert Whipped Cream and Other Delights (omnipresent on thrift-store vinyl but oddly elusive on 8-track). And I was thrilled to find a pristine copy of this last essential Sly and the Family Stone album. 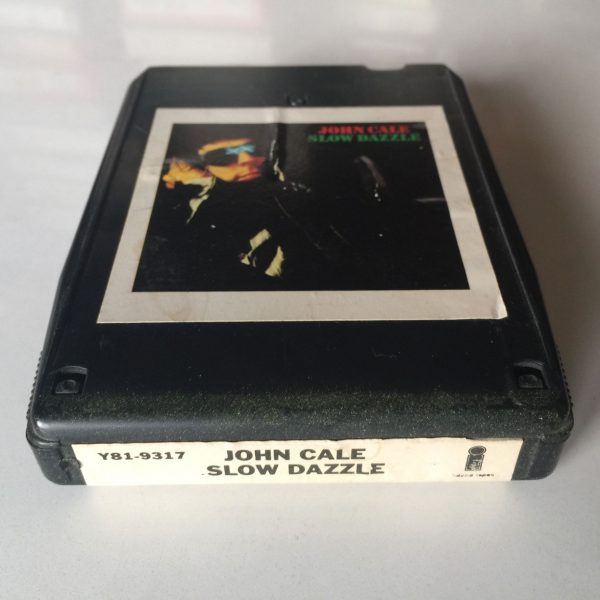 Holy Cow Records: Just blocks from our hotel was the last tape stop on this trip, a shop deep in the bowels of the heavily touristed Pike Place Market. Though I paid a modest collector’s price for this, the second of Cale’s forays into angry, punkish moods, I did get free tapes by Chic and Main Ingredient to sweeten the deal. 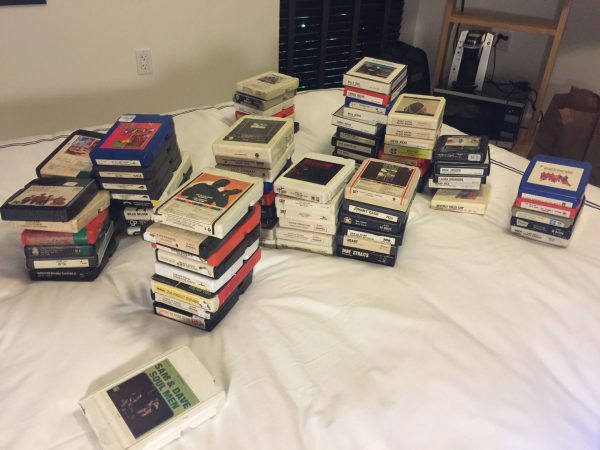 That night, as wife and kid enjoyed a live concert next door, I spread out my treasures in the hotel room, trying to decide what to play first on the portable I’d brought (of course I did). Seattle’s a fun town for tape shopping, and I promise you I left plenty of goodies behind for your enjoyment!