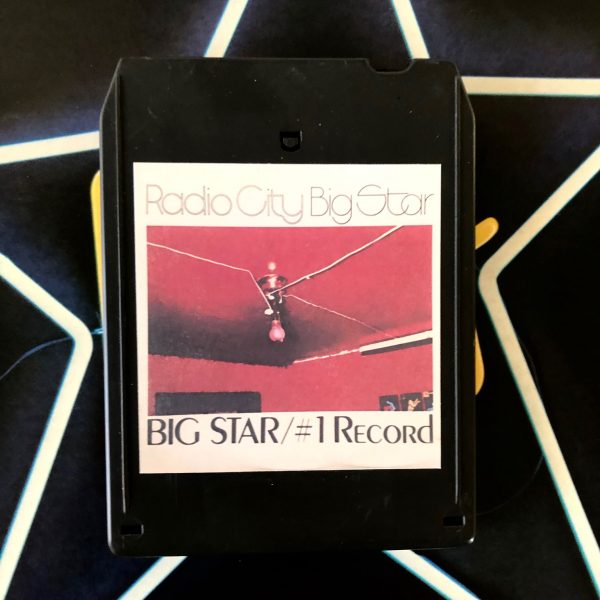 A wrong set right: Here it is, the one tape (or two) that should have come out during the heyday of 8-track but didn’t. Big Star’s first two magnificent gems of power pop died the death due to poor promotion and distribution. As such, no Big Star 8-tracks were ever issued; pity, as they would have sounded great in cars. (I got so mad at the tapes’ non-existence that I made my own 8-track “twofer;” more info below.) Though made with slightly different lineups and very different creative processes, both albums offer solid guitar riffs, soaring harmonies, lyrics full of teen angst, and plenty of love for the Byrds, Beatles, and Todd Rundgren. 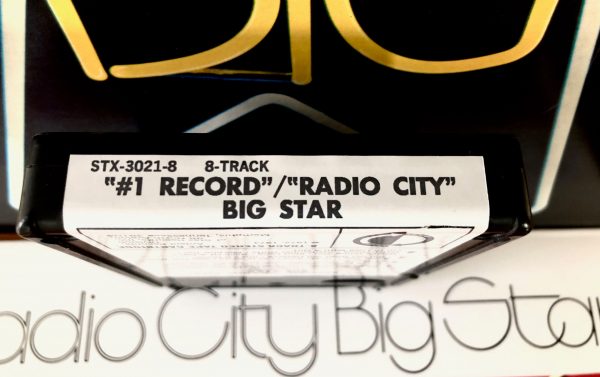 The ballad of Big Star: In a way, the band was born in (or near) a recording studio: Ardent Studios in Memphis, Tennessee. Built in the ’60s by engineer John Fry to the highest technical standards available, Ardent soon took the overflow from Stax Records’ busy in-house studio, producing such gems as Isaac Hayes’ Hot Buttered Soul. Fry encouraged Anglophile songwriter Chris Bell to form a band, so he connected with drummer Jody Stephens and bassist Andy Hummel, all of whom frequented Ardent. Needing a frontman with proven appeal, they invited Alex Chilton, vocalist for the recently defunct Box Tops (“The Letter,” “Cry Like A Baby”) to lead the group.

#1 Record: Big Star (named for a supermarket across the street from Ardent Studios) was really a studio group; they only played seven live gigs in their first incarnation. Over the course of 1972 they slowly assembled #1 Record at Ardent, driven by Chris Bell’s skillful songwriting and perfectionist nature and Fry’s crisp engineering. Chilton contributed to Bell’s amazing compositions but didn’t craft any songs of his own at the time. Ardent released the album through soul label Stax, who had little experience in promoting rock albums. The album got good reviews but few sales (people couldn’t find the album in stores) and zero airplay. This sent the sensitive Bell into a spiral of drinking and depression, and he quit the band, hoping for solo success.

Radio City: Now what?, Chilton, Stephens, and Hummel asked themselves. Lacking any better options, they decided to carry on with Big Star. In a show of great trust, Fry gave the band keys to Ardent so they could record and experiment after hours. After learning to thread tape, set levels, and press record, the band captured new songs and ideas in informal recordings, some actually used on the album. Chilton stepped up as a songwriter, combining the sound Bell had pioneered with wildly creative songs that followed no structure but their own; Chilton’s lyrics were even more informal, introspective, and “teenage” than before. This time Fry captured the songs quickly in just a month or two, giving the album a spontaneous, live energy with the same impeccable production.

The star also rises: Just as the album was being launched, Stax dropped the ball again; Stax’s new distribution deal with Columbia was slow getting started, and a second splendid Big Star album fell through the cracks. Denied once again! The band more or less fell apart at this point; Chilton and Stephens recorded a third Big Star album, but it was effectively an Alex solo record. (Note that Big Star Third has its own cult audience.) The end of Big Star, but also just the beginning: the band reformed two decades later and played on and off until Chilton’s death in 2010. The group’s distinctive jangle-pop sound inspired future generations of artists, including R.E.M., the Replacements, Teenage Fanclub, Gin Blossoms, Matthew Sweet, and Wilco.

Why no 8-track? Hard to say; Stax issued 8-track versions of nearly all of its soul vinyl releases in the early ’70s. Perhaps they were waiting to see if either album had momentum on radio or retail before issuing a tape. Or maybe it was just something they forgot to do (like promoting two of the most influential albums in pop history). 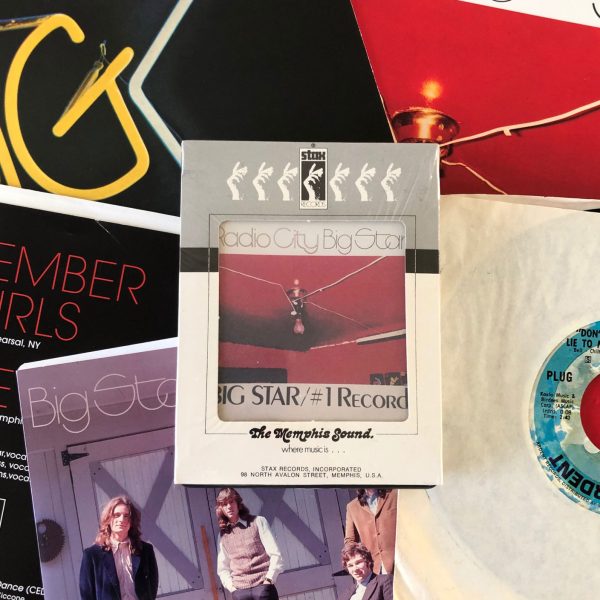 About this tape: I’d originally planned to make separate tapes of #1 Record and Radio City, but I’d gotten to know both through a single-CD release, so separating them just seemed weird. Not to mention forcing me to decide which I wanted to hear first! Luckily the albums were almost the same length, so I could split them equally across the tape’s four programs. By juggling a few middle songs, I was able to retain the classic starts and ends of each album. Since Radio City is the shorter album, I had to pad it slightly with brief pauses between the songs (rather than one long one at the end of each program). As with all my custom 8-tracks, I snipped off the extra blank tape at the end of the programs to ensure prompt program changes.

For the front label I simply used the cover of a 1978 gatefold UK vinyl release of both albums (the earliest such pairing). I based the back label design on perhaps the most famous Stax 8-track, Shaft by Isaac Hayes. I followed through on Stax’s tradition of putting the album titles in quotation marks. Shaft was released on Stax’s Enterprise sub-label, so I copied that design treatment for Ardent. To put the album titles on programs 1 and 3, I used the bold/medium type styling from the multi-artist Wattstax. I uploaded type samples to websites WhatTheFont and FontSquirrel to identify original fonts used. 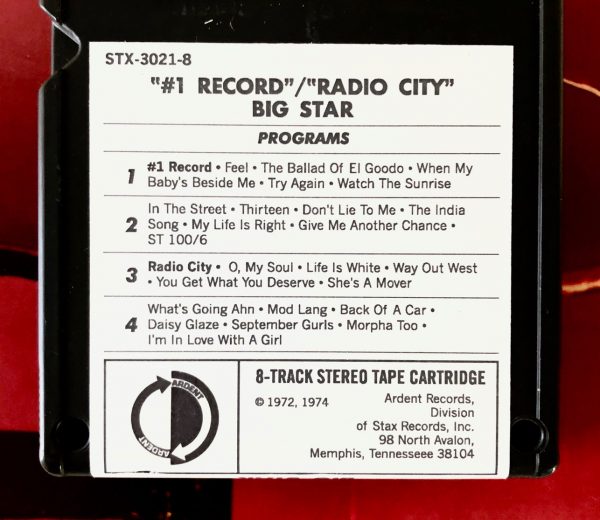 Surely mine isn’t the first homemade Big Star 8-track, but it might be the fussiest. Hey, I did it for all the ’70s teens who weren’t able to hear “Back Of A Car” in the backs of their cars.

Extra credit: Bruce Eaton’s splendid 33 1/3 book on Radio City was a valuable resource for this article and a darn fun read. 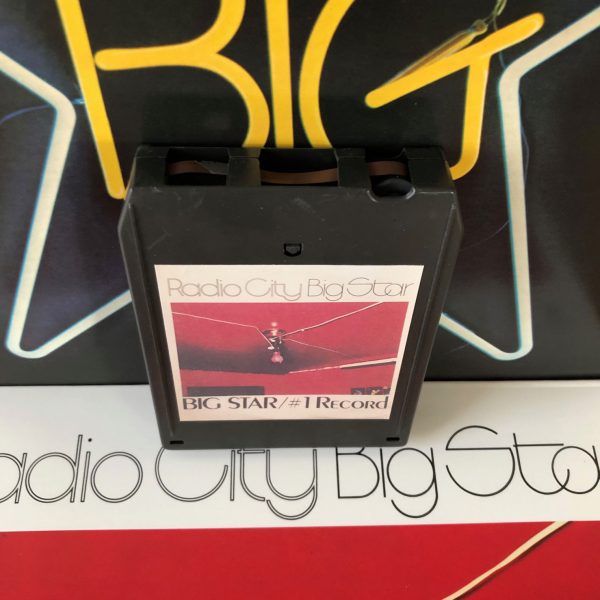