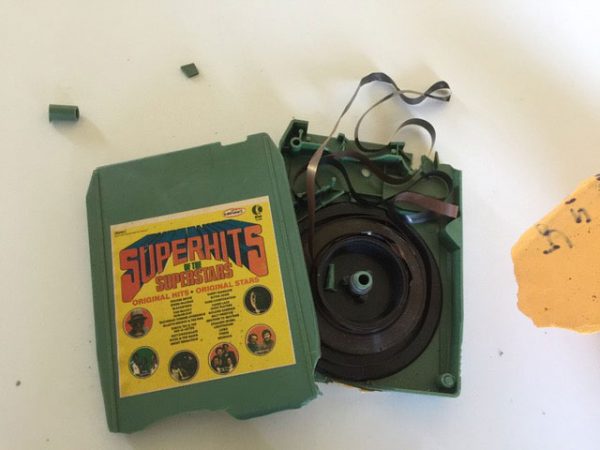 1. Portable music, but no Walkman.
8-track —an endless loop of audiotape inside a sturdy plastic cartridge— was music’s first mobile format, originally designed to be played in car stereos. Cassettes actually evolved along the same timeline but were much slower to achieve decent fidelity. Along with cassettes’ high-bias tape and noise reduction, the invention of the Walkman personal player helped signal 8-track’s death knell—no cartridge player could ever be that small or portable.

2. Rock, pop, funk—ka-chunk.
8 tracks means 4 programs in 2-channel stereo, all running in parallel. So every album had to be chopped into four equivalent durations, making it necessary to shuffle songs, cut some into pieces, and repeat others. And between each program, the tape head shifted, making a loud “ka-chunk.” Mood killer!

3. Born 1960s, died 1980s.
The 8-track was launched in about 1965 and quickly caught on due to its convenience, mobility, decent sound, and compact size. The format thrived throughout the ’70s but died out around 1982, when most labels abandoned it because of dwindling popularity. And perhaps its tacky association with custom vans and shag carpeting.

4. ’80s tapes are collectors’ gold.
But wait—the 8-track wasn’t quite dead, due to the Columbia and RCA Record Club’s thousands of members, some who still preferred cartridges. Which meant that tiny batches of 8-track tapes by classic ’80s artists like Prince, Michael Jackson, Duran Duran, and U2 got shipped out to subscribers—and only them—as late as 1987. Today these scarce tapes can be worth hundreds of dollars.

5. You play the box.
Imagine leaving a record in its jacket, shoving them in a slot, and hearing music play. That’s what you do with an 8-track: you listen to the packaging. No liner notes, lyrics, or gatefolds here—whatever they could squeeze onto a label, usually just the album cover and a track listing, was all you got. Hope you remember the song order—you can’t see it while playing!

6. Joining the album in progress.
Rewinding 8-tracks was impossible — due to the loop configuration, it would destroy the tape—and fast-forward was rare. So you could never start at the beginning of an album. Instead you’d plug a tape in and hear the second verse of a song or maybe the guitar solo, then maybe another song and —ka-chunk— next program. Like an endless carousel, you hop on and off whenever it suits you.

7. Hope you like fixing things.
8-tracks sure weren’t built to last—after forty years, the tape splices and foam-rubber pressure pads are all falling apart. Meaning that if you want to collect these vintage carts, you better be handy with tape, foams, and tools to get them in listenable shape. (If you can’t be bothered, you can buy “rebuilt” tapes online—and pay a little more.)

8. Your hermetically sealed childhood.
Like most boomers, I gave up on 8-tracks as the ’70s ended and never looked back. So, unlike vinyl and cassettes, the cartridges hold a strong nostalgia—a genuine artifact from the past, untouched for decades. Happily the tape inside has held up perfectly over the years. So when you get an 8-track all spliced and padded and find a working tape player, it can be magic. On an endless loop, no less.

See you next Thursday for more 8-Trackin’!